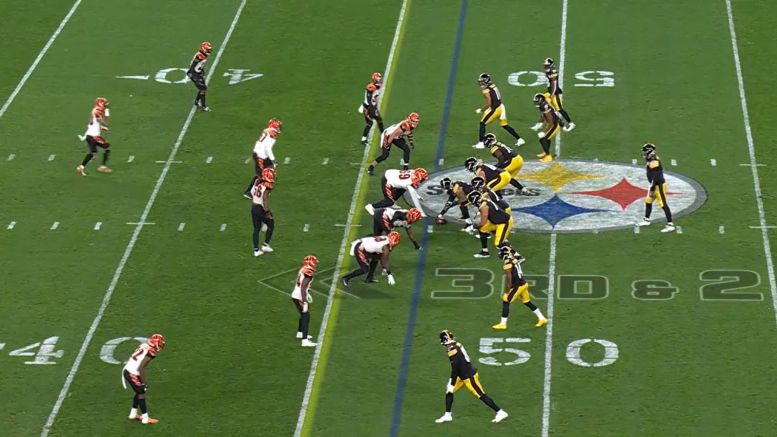 With Pittsburgh Steelers running back James Conner having been confirmed as testing positive for Covid-19, he will now be required to sit out the team’s scheduled Tuesday game against the Baltimore Ravens. Running back Jaylen Samuels has also been ruled out, limiting the team’s options.

While the Steelers figure to head into the game with Benny Snell, rookie Anthony McFarland, and practice squad member Wendell Smallwood to man the position, it begs the question: will we see more of the team’s 01 and 00 personnel sets to accommodate for the loss of their lead back?

Remarks about the extent to which the team has run from these four- and five-receiver packages has been somewhat exaggerated by media outlets who do not actually chart snaps to determine how often it is actually used—notably, they ran just one snap out of 01 against the Cincinnati Bengals, for example—but it cannot be denied that it has become an effective weapon recently.

Its usage has dwindled in the past two weeks, and probably not be coincidence, because each of the past two games have been blowouts during which they were able to play with more comfortable leads, even though that did not necessarily translate to a higher rate of actually running the ball.

With their lead back actually not available, however, it makes it a lot more tempting to just put another wide receiver on the field. The Steelers ran a lot of 01 and 00 personnel during the 2018 season when Le’Veon Bell peaced out before the start of the year and Conner was not yet established, using it as a way to get him off the field and give him rest, without quality depth behind him.

Of course, what works best for the game will be determined by how the game unfolds, and frankly, when the game unfolds. At least as of the time of this writing, the game is still scheduled to be played on Tuesday, but it’s hard to say if that will stick, given that we continue to hear about new cases every day.

If the Steelers do play the Ravens on Tuesday, then they will be playing a defense that hasn’t really been hit in the secondary by the coronavirus, but which has been hit hard in the front seven, with Calais Campbell, Pernell McPhee, Jaylon Ferguson, and several more defensive linemen sidelined. Brandon Williams was originally placed on the Reserve/Covid-19 List, so I expect him to be back unless he tests positive subsequently.

The 01 personnel package really got people’s attention after the Baltimore Ravens game the first time the two teams played, as the Steelers turned to it in the second half to mount a comeback, using it as a means of slowing down the blitz and taking advantage of mismatches at the cornerback position. They used it again fairly extensively a week later to come back against the Dallas Cowboys.