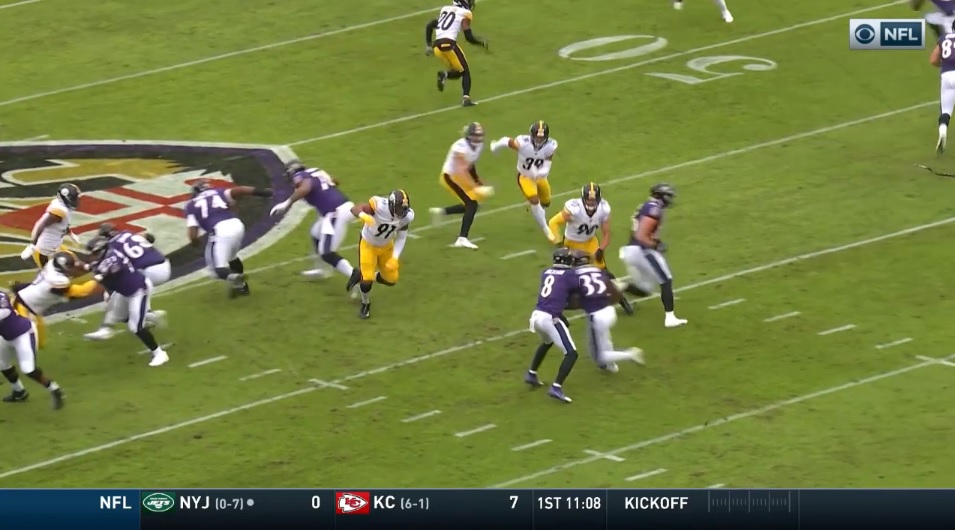 The Steelers remained undefeated by beating the Ravens 28-24 last Sunday and the play of defensive end Stephon Tuitt played a big role in the victory.

Tuitt compiled nine tackles and two sacks of 2019 MVP, Lamar Jackson, to help the Steelers knock off their hated AFC North rivals. To go along with his two sacks, he was also credited with three quarterback hits and three tackles for loss.

Tuitt is an often overlooked player on this superstar Steelers defense. This week his play did not go unnoticed as Tuitt was named the AFC defensive player of the week.

It’s the second time Tuitt has received those honors in his career. The first time came in Week 11 of the 2016 season. Let’s take a look at what Tuitt put on tape last week versus the Ravens to earn himself the award.

We’ll start with my favorite play from Tuitt this Sunday. The Ravens are running a midline read-option out of the pistol formation. It looks like the Ravens blocking scheme calls for a double team on Tuitt but his get off and swim move are too quick for the linemen and he knifes thorough for the tackle behind the line of scrimmage. You’d be hard-pressed to find a better run stop than this play. This is legitimately Aaron Donald-level good.

Below is another phenomenal play from Tuitt. He wins makes quick work of the guard again with the swim move. The Ravens’ center does help a little bit by blocking the initial shovel pass window, but once he clears, Jackson would have likely try to sneak it to runningback but Tuitt is there to cover it up. Then he continues to hustle and makes the tackle on Jackson (and Phillips, the center, for good measure).

For as many times as the swim move worked for Tuitt, this time it backfired. He again goes for the swim move off the snap but is hit with a double team from the tackle and the tight end. Unlike the first clip, the tight end is actually able to reach Tuitt to double team and together he and the guard blow Tuitt off the ball as he is caught playing too high. It leads to a nice hole for the back and an explosive 20+ yard run.

Not to worry though as Tuitt caught another body with his swim move shortly after this. This time he uses it later in the play pairing it with a bullrush to disengage and win the rep. Jackson is able to throw the ball away at the end but the refs called it “in the grasp” and marked him down for Tuitt’s first of two sacks in the game.

We’ll follow up Tuitt’s first sack with his second. This time his main move is just a straight bullrush to push the guard right into the quarterback’s lap. Jackson starts to feel the pressure just as Tuitt begins to use an “arm over” to disengage and meet his friends, TJ Watt and Isaiah Buggs at the quarterback.

This rep Tuitt shows his grown man strength. He walks the center back about 8 yards with his bullrush and just misses the sack on Jackson, as he throws it away at the very last second. Live, I thought this should have been called intentional grounding. You can see the receiver’s feet flash in at the top of the screen, so likely a good call by the refs as it did go past the line of scrimmage.

The last thing we’ll take a look at is two of Tuitt’s run stops. They’re almost identical and happened in a 3 play stretch. Watch Tuitt as he has vision on the ball carrier, stacks, sheds, and makes the play. The linemen have no chance of competing with his strength on these plays.

If wasn’t easy after watching the live broadcast, it’s especially easy to see after watching the tape why and how Tuitt was awarded with the defensive player of the week. In a game that the defense gave up 457 yards, it was purely a highlight reel game for him. He continues to impress and have a consistent season. In case you didn’t know here’s Tuitt’s full-season projections this year, he’s on pace for:

This is the type of season that Steelers fans been waiting for out of Tuitt. We’ve seen his flashes and dominance in waves, but all too often his season was then ended by injury. If stays healthy through this year it’s likely he ends up as a first-team All-Pro.