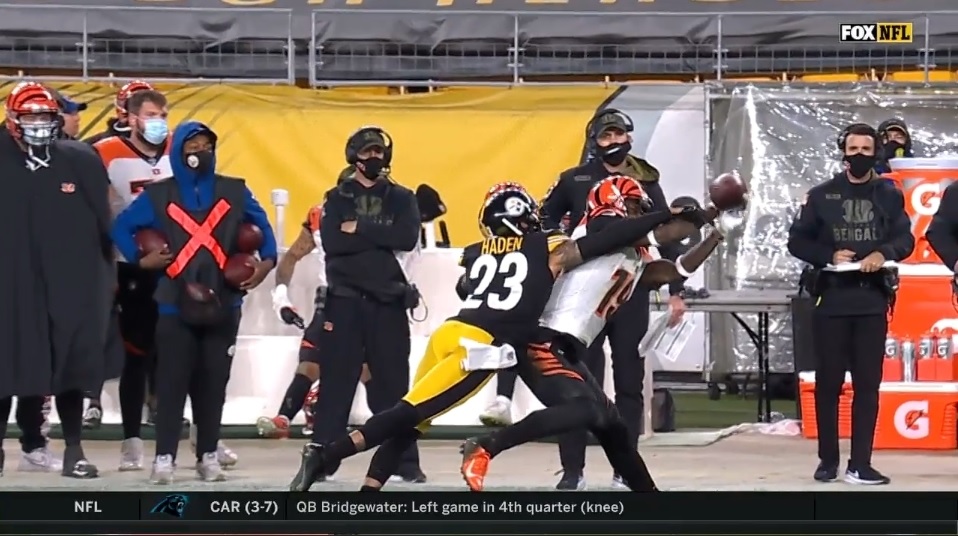 Can we talk about how good Joe Haden was yesterday? Don’t get me wrong, this whole defense played well. They went all John McClain “welcome to the party, pal” on Joe Burrow and the Bengals’ offense scuffled all game long. But Haden was as good as anyone on defense yesterday. His tape’s worth another look.

The Bengals went 0/13 on third down yesterday and Haden was targeted three times. Each time, not only was the pass thrown his way incomplete, Haden broke up the ball.

First one came on the Bengals’ first drive of the game. AJ Green and Tyler Boyd in a stack set. Green running a deep over route. Initially has inside leverage on Haden but Haden makes an aggressive playing, driving on the ball and undercutting the route. Diving effort at the catch point to bat it away and get his defense off the field.

Just a really good job of running the route for the receiver. Green continued to drift while Haden stayed flat and got under the throw. Played it clean, no illegal contact, with a great finish. Notice Haden making the tackle with his outside, right hand as he plays the ball with the left. So if Green catches it, there’s no YAC. High-skill play.

Next drive. 3rd and 7. Haden doing a good job of understanding the receivers split. WR Auden Tate has a reduced split to the boundary side of the field. Good indication he’s tightening that split to give him space to break on an out route. Exactly what he runs.

Haden’s playing off coverage but is keying and reading the QB. Reads and jumps the throw with Tate running out route to the sticks. Haden plants, drives, takes a great angle to the ball. He plays clean the whole time, careful not to make contact early, and plays down through Tate’s hands at the catch point. Tate can’t make the play and the Bengals gotta punt again.

Last example in coverage. Again, working on Tate. Just tracing the receiver’s route. Can tell Haden knows what’s coming based off film study. Breaks down as Tate tries to run the curl and there’s zero separation. Like the top two clips, drives on the football, reaches out at the catch point, and knocks the ball away.

Haden wasn’t just impressive in coverage either. He’s a fundamental, sound tackler from start to finish. 36-7, nine minutes to go, the game is over. But Haden hasn’t changed. Burrow hits Tyler Boyd on a quick out route. Haden’s playing the flat in a two deep shell. Drives on the throw and makes an immediate wrap-and-roll tackle, something he does better and more often than any DB on this team. Technique and effort isn’t waning despite the game already being decided.

That’s not a highlight reel play but that just shows the consistency and effort he’s playing with. Same dude with the game on the line as he is late in a blowout victory.

Haden definitely isn’t the athlete he was years ago. But what he’s lost in athleticism he’s making up for with a high football IQ and superb technique. These plays are teach tape. The value of film study, technique, effort, and consistency. Stuff you include in a coaching clinic or for a young rook to watch when he’s trying to learn the game. Really impressive performance and a big reason why the Bengals’ passing attack went nowhere.