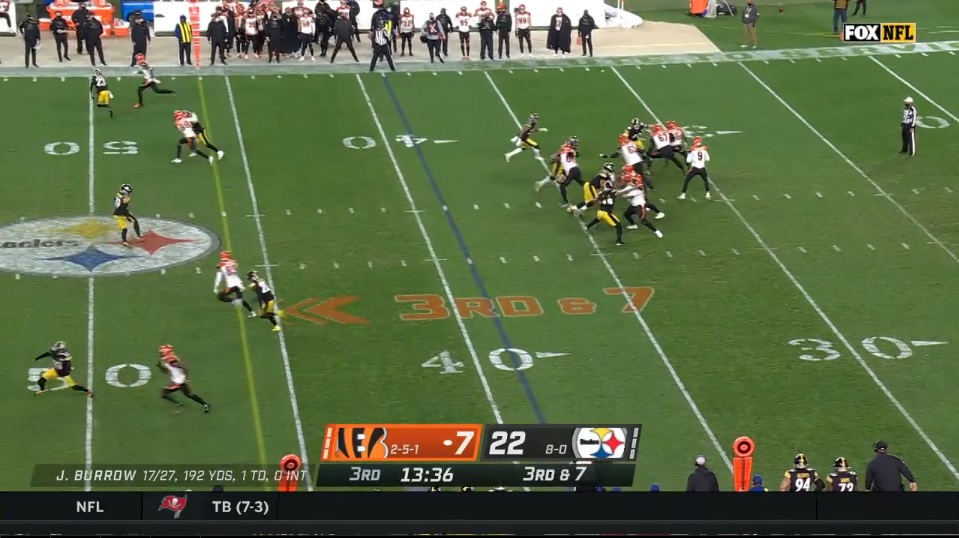 Every week, the Steelers have one guy on the opposing offense they’re trying to take away. Against the Tennessee Titans, it was Derrick Henry. The Baltimore Ravens? Lamar Jackson. Dallas Cowboys? Zeke Elliott.

Pittsburgh had the same intention in Sunday’s win over the Cincinnati Bengals. Only their goal this time wasn’t to take away a runner. It was wide receiver Tyler Boyd. Mike Tomlin praised Boyd leading up to gameday, calling him one of football’s top slot wideouts. FOX announcers Kenny Albert and Jonathan Vilma said Mike Tomlin told them Boyd was the best Pitt player he didn’t draft.

Point is, the focus was on taking him away. Especially where Boyd does most of his damage. Third down. Since 2017, no receiver has more conversions on 3rd/4th down than his 62.

So how did the Steelers take him away? With clear intentionality. Bracket coverage, one DB playing inside leverage, the other outside leverage. And on almost every single third down, they took Minkah Fitzpatrick – in most games, often patrolling deep centerfield – and rolled him underneath to double-team Boyd and take away crossing patterns. Let’s break it down.

Couple GIFs of this to show you what I mean. First third down of the game, 3rd and 7 on the Bengals’ first drive. Steelers not playing with a deep safety here, bracketing both slot receivers. Edmunds to one side, Fitzpatrick to the other, the side Boyd is on. Cam Sutton is playing outside leverage with Fitzpatrick dropping down to take away any in-breaking route. Boyd is blanketed. Joe Burrow tries to hit AJ Green in the same area but Joe Haden makes a great play to cut the route and break it up. Bengals forced to punt.

Next third down on their following drive. Similar idea. Fitzpatrick is mugged near the line of scrimmage pre-snap before bailing on the snap of the ball and getting his eyes to Boyd. Terrell Edmunds does the same on the outside. Fitzpatrick gets his eyes back to Burrow as Boyd breaks to the outside and away from his window. Burrow looks for Auden Tate on the sideline but Haden’s again there to make the play.

Lot of double-bracket coverage from the Steelers without a deep safety. Very similar to some of the things Bill Belichick and the Patriots have done.

This also shows up in Nick Saban’s playbook. He calls this coverage “55.” Photo comes courtesy of Cameron Soran. 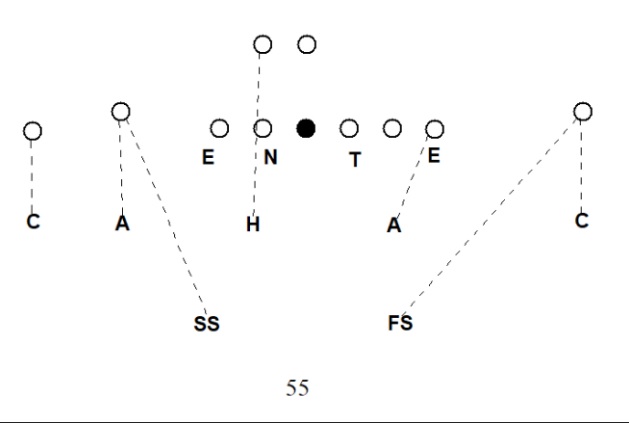 Last clip I’ll show from the game. Fitzpatrick again near the line of scrimmage pre-snap. Here, Cam Sutton bails to the deep middle to play FS. And Fitzpatrick shadows Boyd, forcing the ball elsewhere, thrown too high for AJ Green along the sideline. Another incompletion, another punt. 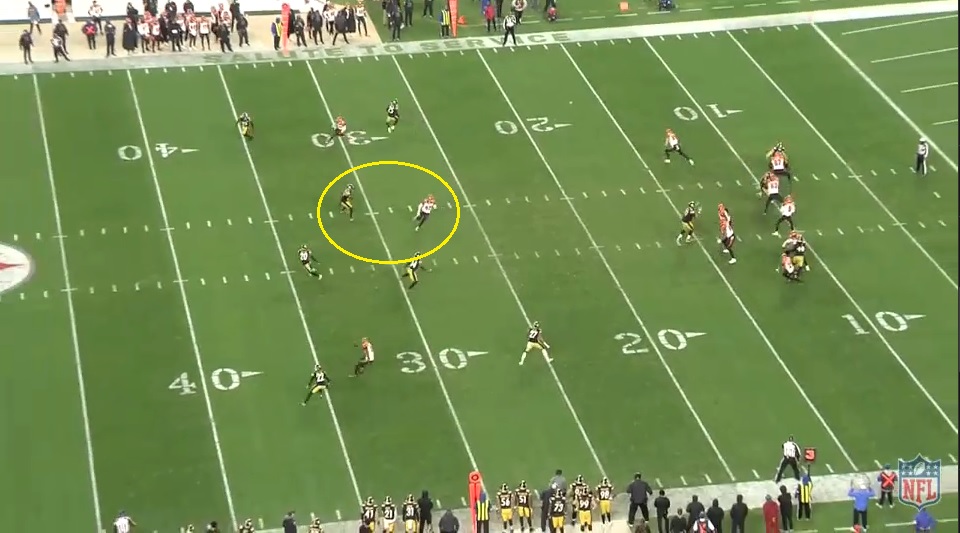 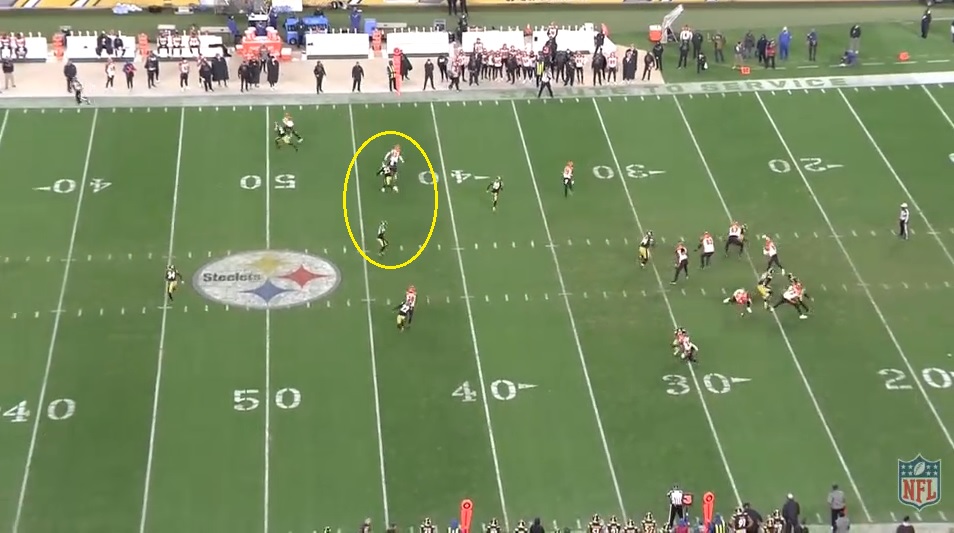 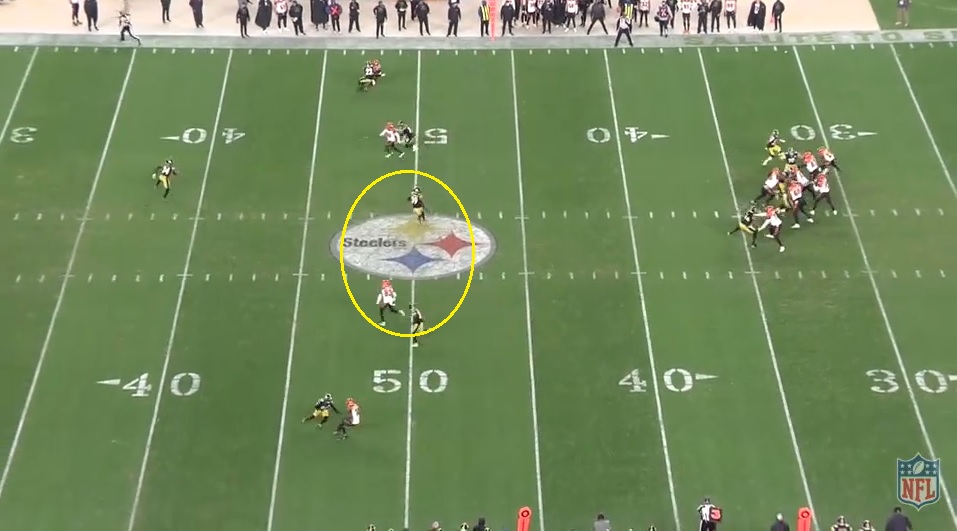 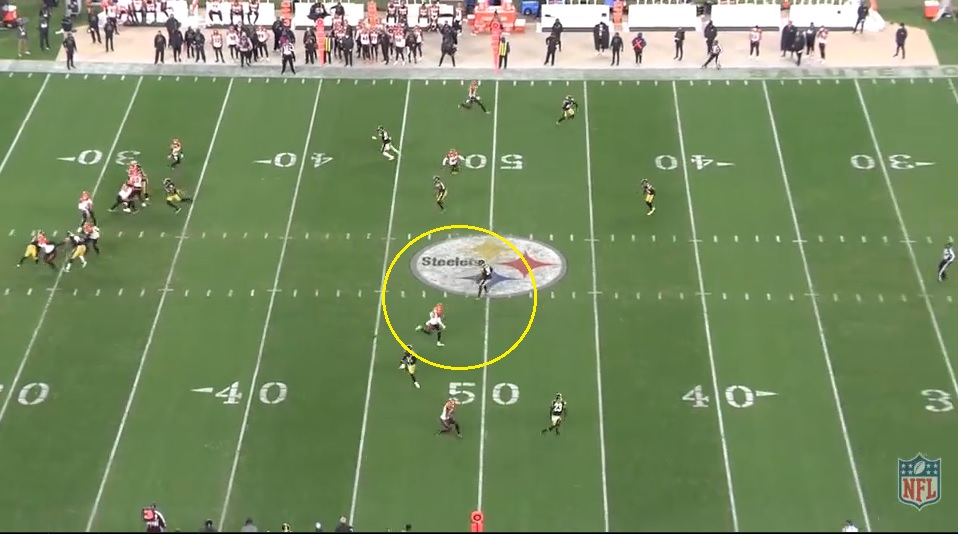 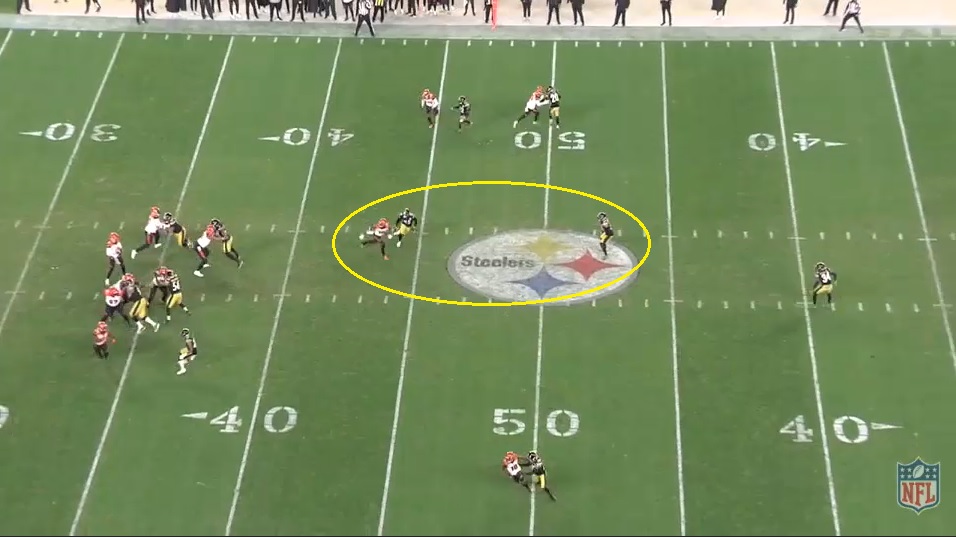 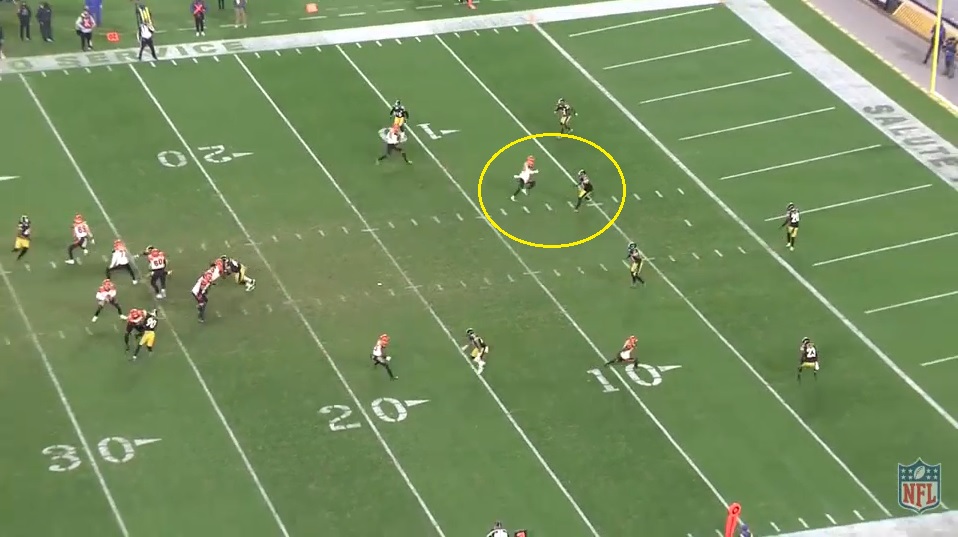 No QB wants to throw towards Minkah Fitzpatrick, even if that means avoiding their best offensive weapon like Boyd. So Fitzpatrick rolling down and robbing the MOF forced Burrow to go elsewhere and not work the middle of the field. It forced lesser talented wideouts like Auden Tate (two catches, 24 yards on four targets) and AJ Green (zero catches on five targets) to make plays on the outside, though rookie Tee Higgins did have a nice performance.

Taking away the middle also forced the rookie Burrow to work the sidelines. To make tougher throws from further distances and stress his lack of arm strength. You see some of these throws. They’re floating to the sideline, allowing CBs like Haden and Steven Nelson to jump and disrupt the catch point. So Burrow attempted throws he’s less capable of making to receivers less capable of making the play. That’s a great defensive plan and execution. Ended with a great result. Boyd had six catches for just 41 yards and the Steelers limited the Bengals to ten measly points.