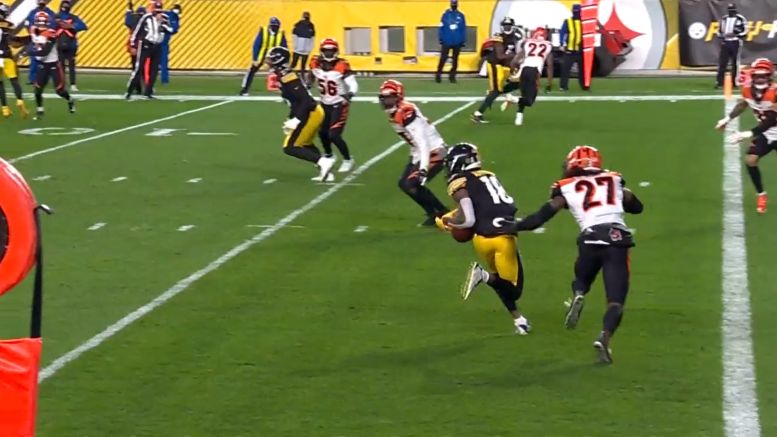 Coming into the season, there were very few who expected to see the type of production that Dionate Johnson has put up this season. Entering their week 11 game against the Jaguars, Johnson has caught 37 passes, for 426 yards and four touchdowns, all ranking third on the team. He has certainly become a favorite for Ben Roethlisberger, who has targeted Johnson 65 times, the second most on the team.

Teams are beginning to respect his speed and ability to stretch the field, and that respect is allowing Johnson to create natural separation. His rare combination of speed and route running devastates opponents, and creating mismatches all over the field.

Sunday against the Bengals was an exclamation point of a breakout campaign for Johnson. The way he attacked the leverage of his opponents and used his speed to his advantage engineered him to a six catch, 116 yard and one touchdown game.

Diontae Johnson is one of the league’s smoothest route runners, who deserves more buzz as the talent he is. His play with Big Ben this season solidified his ability to be more than a player that stretches the field vertically.

The way that Dionate Johnson creates even the most subtle of separation is a thing of beauty. His continued repetition of running full speed on every single route, even when he knows he won’t get the ball, gives him an easier chance to open the defensive back’s hips.

In this first play, Johnson has run plenty of fade and fly routes during the game, leaving the defensive back on his heels waiting to turn and run with him. Because of that threat, and Johnson’s ability to cut on a dime, he runs the slant route in a way where the window to throw in, is wide. Ben delivers a strike right on his hip as Johnson makes his cut. It was poetry in motion, and a sign of a wideout and quarterback being on the same page.

What I enjoy most about #Steelers WR Diontae Johnson's game is his footwork and nuanced route running. Because he threatens teams vertically with his speed, he opens this DB's hips, creating separation, and Ben hits him right as he makes his break. The two have a good chemistry. pic.twitter.com/6Wy7zNyQgy

This second play is a great example of Johnson setting up the Bengals defensive backs with a double move. On third downs or long downs, the Steelers line up Johnson to the field side of the hash, to run a deep out. This is a go to play for teams that like to work the sidelines, like the Steelers. Because, once again, there’s that threat for Johnson to go over the top, and corners respect his long speed, it allows Johnson to attack their leverage. With Johnson, he sells the post once he’s breaking down, forces his man to open his hips inside, and breaks outside to the sideline. This is an incredibly difficult route to cover, because if ran thoroughly, the receiver creates separation. Johnson constantly puts pressure on his opposition. On the next sequence, Johnson once again pushes vertical, gives a slight nod breaking outside, and plants on his next step, getting vertical. He doesn’t get the ball thrown his way, but it still is one pretty route.

#Steelers WR Diontae Johnson doesn't get the ball on these two reps, but because he runs all of his routes hard, and identically, DB's bite up.

Johnson runs a simple out route, doesn't get the ball but creates separation with speed. Next play, DB bites on dbl move, open again. pic.twitter.com/NgNF1FVoUU

The hardest thing about beating zone coverage is getting proper timing down between receiver and quarterback, and finding the soft spots. Part of that was compromised earlier in the season, and to some degree, due to the COVID-19 pandemic. Now, however, Johnson and Big Ben have seemed to find that connection. This play below is a perfect example. Bengals roll their coverage at the snap, as the man over Johnson rolls toward the middle of the field. It leaves Johnson alone on the edge, and instead of booking it down the sideline to try and catch a long ball, he settles his body. Johnson naturally stays wide and maintains his spacing, allowing Roethlisberger to drop it in between two defenders. Johnson understanding what he needed to do in a snapshot is showing his growth and maturity as a receiver.

Diontae Johnson is a freakish athlete. He has juice whenever the ball is in his hands, but my only knocks of him are concentration. There have been times where Johnson has dropped catchable balls, and made questionable decisions with the ball in his hands in the open field. In this second part of the clip below, Johnson just loses sight of the ball and it goes through his hands on the wide receiver drag, screen the Steelers famously run. It’s slight mental errors that keep him from being perfect at times.

A few missed opportunities here from #Steelers Ben Roethlisberger and Diontae Johnson. 1st play, DJ beats man off line, stacks him, but the ball needs to be back shoulder, or to back pie line

Other times, he and Ben have not been on the same page. In the first clip above, Johnson beats his man and stacks him, but Ben throws the ball way too far inside. It needs to be on the back shoulder, or back pie line. It was another rep that was won by Johnson, though.

As time wears on, you have to believe these minor details between the two get things ironed out. The more reliable Johnson becomes in this offense, the more targets he’ll receive, allowing him to showcase his unique skill set. If this trajectory continues, and Johnson continues to grow mentally, there’s no doubt he’ll be mentioned as one of the NFL’s elite receivers.