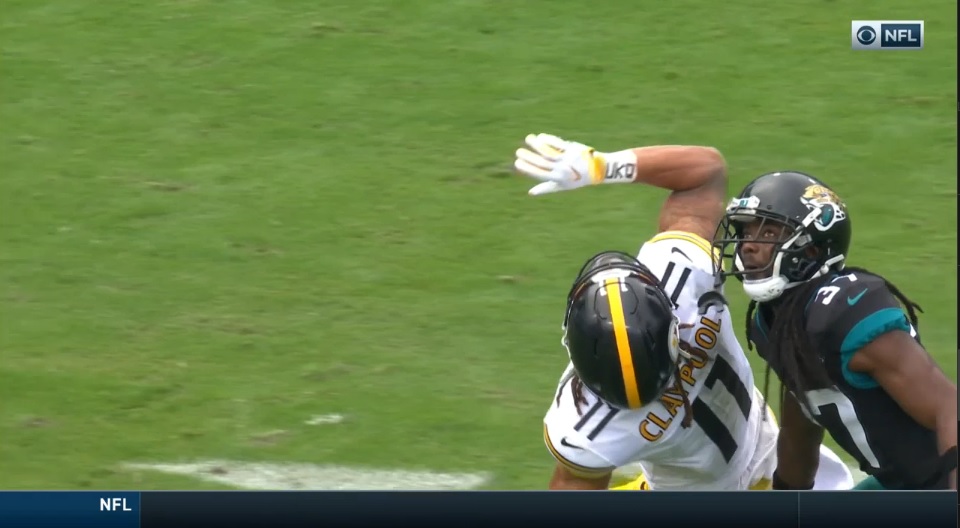 With another touchdown against the Jacksonville Jaguars, Steelers wide receiver, Chase Claypool, leads all rookies with 10 touchdowns (eight receiving, two rushing) this season. He is the first wide receiver in the Super Bowl era with at least 10 touchdowns in his first 10 career games. I wanted to take a deeper look at Claypool’s eight target, four catch day and see how the young receiver continues to win.

Claypool’s speed outs have almost become automatic between him and quarterback, Ben Roethlisberger. Claypool has been improving his route running week in and week out. Watch his rocker step at the top of this speed out, it helps create a violent change of direction without losing speed.

With that speed out being so effective for Claypool it was nice to see the Steelers play off of it with an out and up attempt. This is where you can see Claypool’s raw route-running ability resurface. When running a double move you aim to beat the cornerback twice. First with your initial route which will make the corner overplay it and take himself out of position to cover the second move. Here, Claypool doesn’t sell the out enough with a head fake or the urgency that he ran his actual speed outs. The cornerback, Claybrooks, was getting beat on this route all day and even he wasn’t sold this was an out.

Compare Claypool’s route to his teammate, James Washington, against the Browns. Washington sells the out with urgency and even a head fake that looks back for the invisible ball. Then, he violently sticks his foot into the ground and explodes upfield as the cornerback has already committed to the out. The result is an easy win for Washington for six

On his touchdown, Claypool again showed a small yet important detail to being a consistent deep threat in the NFL. Coming out of Notre Dame, while he had his fair share of deep catches there wasn’t much on film of him being able to use his speed to “stack” cornerbacks downfield.

Stacking forces the defensive back to work through the frame of the wide receiver to get to the ball. It also allows the QB a margin for error to the inside or outside of the wide receiver. While this is clearly not great technique from the cornerback, it’s still an impressive showcase of Claypool’s speed and growth at the position.

On this rep, Claypool again shows his ability to stack the cornerback. His problem on this play though is tracking the ball. You can see he starts to track it around the 20-yard line and it’s not until the 10-yard line that he begins to realize that the ball is going to land outside him.

Roethlisberger isn’t absolved from blame here either as there’s no deep safety help here. If he throws it inside with the corner already beat it would make it a much easier catch on the receiver. With that said, I still think this is a catchable ball if tracked sooner.

It’s hard to mention Claypool’s downfield productivity without bringing up the sheer amount of penalties he’s drawn this year. It feels like every week he draws at least one long pass interference call a game. Claypool currently leads the NFL in pass interference penalty yardage drawn with 135 on six penalties, two coming last Sunday. His size, speed, and physicality, combined with the ability to move around to create mismatches all over the field leave defenders simply tackling him instead of allowing big play after big play.

On top of all the penalties that could have added to Claypool’s stat line, there also were quite a few plays that didn’t come to fruition due to the quarterback targeting other receivers while he is open. This will happen to every receiver, but it’s fun to see just how many times Claypool is wide open for big plays in this offense.

In this play, the Steelers are in an empty formation with a bunch trips set to the right. The Jaguars come out in a form of Cover 3 and Claypool runs a corner. The cornerback to his side carries the out route from the #1 receiver and leaves Claypool running by himself. Unfortunately, Roethlisberger never makes it his way in the progression.

On the below slant route, Claypool again shows his improvement in the route running department. He shows great tempo with his footwork and patience at the line of scrimmage. The cornerback has to respect his speed down the sideline and opens outside, just as Claypool wants, before slapping the defender’s hands away and exploding inside. The defender’s baseball turn gives Claypool a good 5 yards of cushion. This is another case where due to progressions or presnap reads, the quarterback isn’t looking his way or it is likely another big play.

I apologize if these may be getting old, but this is just how badly Claypool was torching the Jaguars cornerbacks Sunday. This is actually the same stick concept that Claypool scored on in the first half. Claypool again shows excellent patience at the line of scrimmage, pushing the corner’s outside shoulder letting him commit that way before swimming inside for a free release down the field. If Roethlisberger isn’t pressured on this play it’s possible he lets it fly for another Claypool touchdown and some deja vu for the Jaguars secondary.

Okay, I promise this is the last big play that Claypool could have had. This occurred on Ebron’s touchdown that iced the game for the Steelers. He uses a speed release inside and bends it back around for a speed out. He is just so smooth when he runs for a man his size, it’s like he’s gliding. The cornerback is all sorts of out of shape trying to cover Claypool and if Roethlisberger chose to throw the out it’s likely six points as well.

For all the good Claypool did in the game, there still were a few points to his game that could have been cleaned up.

Running the comeback route is a play that Claypool really needs to add to his repertoire as cornerbacks are going to continue to get scared by his ability to beat them deep. Here, Claypool pushes off the line and does a great job of powering down and pushing the corner by before getting out. The problem is him taking far too long to get his head around and tracking the ball.

In the NFL a 15-yard comeback throw from the far hash is one that has to be anticipated or it will be picked off. This ball is out of the QB’s hand before Claypool even begins to power down. But there’s still plenty of time for Claypool to track this ball. While I’m sure it’s something he wasn’t exposed to much while at Notre Dame, it will come with experience with NFL quarterbacks. Is it a tough play? Yes, but it’s a play he can and should make.

The most disappointing thing that I saw from Claypool Sunday was his failure to block in the run game. The team wouldn’t put him in these spots if they didn’t think and know that he has the ability to make these plays. It comes with the territory of being a big, physical receiver, especially one that’s proven to be a quality special teamer.

The “want to” is there, however, he may be a little too overzealous as he continues to lunge at defenders instead of staying square, locking his hands inside and driving. In the following two plays Claypool has crucial blocks and doesn’t come close to making either.

The first one is definitely a tough alignment as the defender begins to creep inside before the snap. To make this tougher, Claypool begins to run upfield instead of horizontally to get an angle on the defender. He then lunges and whiffs leaving running back, James Conner, to fend for himself in the backfield.

The second is a similar block with a more advantageous alignment presnap. This play isn’t a designed outside run like the previous so the block isn’t as significant but due to Claypool whiffing again Conner is kept from bouncing this run outside and is bottled up for a short gain. This Steelers run game needs help from all 11 on the field to get that part of their offense rolling again, this won’t help.

The last thing I wanted to highlight was a wrong route ran by Claypool. I couldn’t tell watching the tape if this was a presnap check or not, but Claypool missed some sort of communication as he is also running the screen with Diontae Johnson. An extra blocker in front of Johnson certainly wouldn’t have helped. These are the sort of things you can expect from rookies, but just hope they don’t cost you in any big spots.

All-in-all Chase Claypool continues to exceed any sort of expectations I had for him coming into this year with hardly any preseason and being in an already crowded receiver room. He’s already proven to be one of the brightest young stars in this league. The fact he’s so successful while still being so far from a finished product is truly scary as his potential is through the roof. If he continues to work in the margins and clean up the minute details of his game, he’s so close to being a volume receiver who can have massive games week after week.