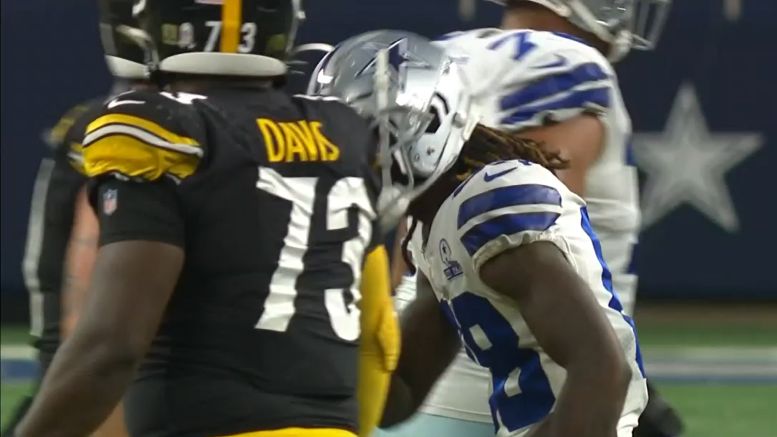 For the first time all season, every 2020 Pittsburgh Steelers draft pick was active and took snaps Sunday against the Dallas Cowboys. One of the rookies making their debut was Defensive Tackle Carlos Davis out of Nebraska. The 6’2”, 320 pound lineman played 16 defensive snaps on Sunday, splitting time with some of the other defensive lineman on the Steelers roster.

In college as a Cornhusker, he amassed 125 total tackles, 16 tackles for loss and 9.5 sacks as a four year starter, and was selected in the seventh round of the 2020 NFL Draft.

On Sunday, Davis made some nice plays defensively, despite not playing a large amount of snaps. His projection coming out of college was a rotational player that could produce in spurts, and he delivered on that projection against the Cowboys offensive line. Below are some of my takeaways from his game.

First thing I noticed is that he plays with tremendous effort. He doesn’t give up on a play, and was flying to the football even if he wasn’t in position to make the tackle, which you love to see from a young player. On this first play, he stays engaged with the center, rides the play down the line, and makes a tackle on his first NFL snap. The tackle was made on Ezekiel Elliot nonetheless, kicking off a solid start in his debut.

Nice job by 7th round rookie Carlos Davis, flowing down the line, making the play. Can always say his first stop was against Zeke. #Steelers pic.twitter.com/oyMOfN5CaG

This second play was easily his best of the day. Near the goal line, Davis recognizes the Cowboys are running a screen, and he has the presence of mind to redirect down the line, and ends up with the tackle for loss. Making a play like that shows that Davis has been doing his homework and remained prepared, despite being buried on the depth chart. This should be an encouraging sign for Steelers fans if Tyson Alualu can’t go Sunday against the Bengals.

He only played 16 snaps Sunday, but #Steelers rookie DT #73 Carlos Davis made a few splash plays.

Here, he does a nice job redirecting, and getting the TFL, also thanks to Cam Heyward.

Should be interesting to see if he will get more snaps going forward. pic.twitter.com/LQWKCD0rlS

Davis also did a solid job not getting swallowed up by double teams. In this rep, Davis does a nice job upon initial contact of keeping his body square.. The easiest way to lose a double team is getting your body or shoulders turned, allowing the second man on the double team to wash you down. However, Davis remains square, and maintains his gap responsibility, and doesn’t get moved by the double team. He doesn’t make the play, but still a solid rep from the rookie.

#Steelers rookie Carlos Davis does a nice job not getting blown off the ball and maintaining his gap responsibility and fighting the double team. He doesn't make the play here, but nice to see he's remaining gap sound. pic.twitter.com/kSGx3tPl30

There wasn’t too much to pinpoint negatively from his debut, but Davis has to do a better job of fighting against the wash down block. There were multiple reps, specifically in the running game, where Davis just simply gets blown out of the play because he slants too much upfield, or allows the offensive linemen’s momentum to move him. If he wants to continue to earn reps and remain in the rotation, he has to become more consistent in the run game in preventing that from happening.

My only major knock on #Steelers DT Carlos Davis is not fighting to remain in his gap, and getting washed out of the play.

He has to do a better job directing his body towards the play, and maintaining his run lane gaps. These two plays showcase him getting washed out of play. pic.twitter.com/oBReRfLS6E

The bulk of his snaps were from the second half, and with each play he began to play stronger and stronger. This was his first taste of the NFL, with no pre-season so he will need more time to develop. Although he is just a rotational body now, I could see an opportunity for him to potentially earn some big snaps down the road if he continues on a positive progression in terms of production. Time will tell if he becomes an integral piece to the Steelers defense.