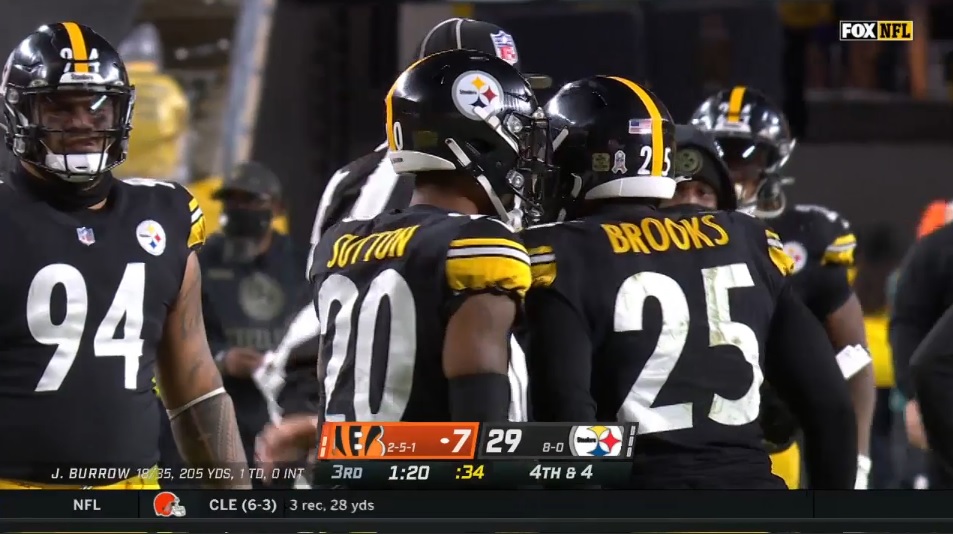 It was known coming into 2020 that Cam Sutton was going to have a larger role in this Pittsburgh Steelers defense after an impressive 2019. The question was always how much larger of a role, and would he be up to the challenge? In the absence of starting nickel cornerback, Mike Hilton, Sutton has stepped up, forcing forced fumbles in three-straight games and continuing his strong showing in pass coverage. There have only been eight longer forced-fumble streaks in the league over the past 21 seasons. Sutton also has 17 tackles, an interception, a sack, two tackles for loss, and a pass defended in the five weeks since Hilton went down.

It was known coming out of the University of Tennessee that Sutton was a smart football mind. This is a guy that during his meeting with the Steelers at the NFL combine, was able to walk through every player’s responsibility on the Volunteers’ defense for plays handpicked by the Steelers staff. Knowing this, there’s no surprise he’s also extremely versatile on this Pittsburgh defense as you can see him lined up at outside corner, slot corner, dime linebacker, and safety spots on a play-to-play basis.

Let’s take a dive into the Cincinnati Bengals game tape and see how Sutton excelled this week against the NFL’s #1 overall draft pick, Joe Burrow.

We’ll start with the easiest tackle for loss that Sutton will get in his career. Burrow flips it out to the running back on a check-down. It’s a short throw causing the back to fall to make the catch and Sutton taps him to get his TFL. The devil is in the details here though. Sutton wants Burrow to throw to the flat. He understands that if Burrow throws it there it’s a dead play. So what does Sutton do? Instead of charging the flat route, he powers down and baits Burrow into making the throw. Then as soon as Burrow commits, Sutton rallies to the ball. Great cerebral play that you may miss watching live.

We’ll go from one TFL to another. This time on a 3rd & 4 the Bengals hurried to the line and tried to quick-snap it out of a bunch quads formation. Naturally, this puts the defensive coverage in a bind especially in man as the concepts are ripe for natural pick plays. However, due to the coverage guys all being at different depths they ensure they won’t pick each other off, which was the problem with the 4th & goal touchdown from Burrow to Tee Higgins in the first half. Sutton sifts through the traffic and flies to the flat, laying a solid hit in Tyler Boyd’s chest just as he turns upfield. This is a play if you didn’t know any better you would have thought it was Mike Hilton. It’s a fantastic play to get the defense off the field again on 3rd-down.

The play everyone talks about for Sutton is the forced fumble. He’s always been a guy that has looked for that “Peanut Punch” made famous by former Chicago Bears cornerback, Charles “Peanut” Tillman. It’s just not until recently that Sutton has been able to see the fruits of his labor. This week though, he used a straight rip on Tyler Boyd to jar the ball free. You can see below, the TV angles have a great view of him fighting to find the ball and then using Boyd’s own momentum against him to help rip the ball out. It almost looks like he’s starting a lawnmower for his third forced fumble in as many weeks.

Here’s another example of Sutton’s football smarts showing up on the field. You can see him diagnose the route from the Bengals receiver right off the bat knowing he’s either going left or right, right around 5 yards. Sutton does what I call “tennis balls” on the balls of his feet waiting for the receiver to commit inside, then explodes to cut off the route and cause the incompletion. This is what they call “teach tape” for coaches.

I would be doing Steelers Nation a disservice if I didn’t dive into Sutton’s negative plays from Sunday as well. This is almost the same exact play as above. Sutton sits on the route from #2 at 5 yards. This time Boyd runs a whip route that fakes inside before breaking out and Burrow puts it right on him. Sutton shows his burst and acceleration too but JUST misses the pass breakup as his subtle move to the inside before going out is the difference between a completion and a knockdown in the NFL. In this spot, I’m not going to hate on Sutton’s aggressive mindset, Burrow just threw the perfect ball.

Next is one that you may have thought was a bad play by Sutton but actually wasn’t. On the 54-yard pass from Burrow to Higgins in the 2nd quarter, there’s a clear coverage bust on the play and it looks like Sutton doesn’t carry WR2 down the seam. In actuality, the Steelers are in Cover 3. What this means is Sutton was dropping into the right zone (curl/flat) while the cornerback, Joe Haden, has the deep right third. Instead, Haden tries to jump the hitch route by WR1 and leaves Higgins streaking down the field uncovered.

With the coverage bust, how are we so sure that this is cover 3? Well, the Steelers didn’t make us look too far. Look at the screenshot from the very next play below. The defense is in the same front, again playing cover 3 against another empty formation. The corners both play deep third and carry the #2 receivers vertical. 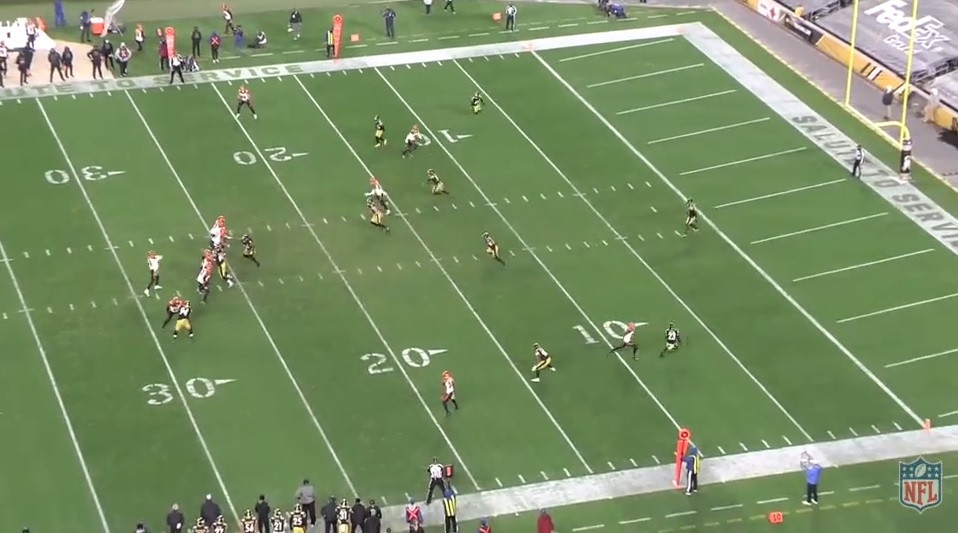 This was probably Sutton’s worse play in coverage all day. Again he was matched up with slot receiver, Tyler Boyd. Boyd stutters outside and gets Sutton to lean that way giving a clean go down the seam. With no safety help, it’s lucky Burrow never got to his backside progression because it would have been an easy pitch and catch on 3rd-down, and if Boyd catches it in stride, he has a chance for a crib call.

The last thing I wanted to discuss is the biggest difference between Sutton and Hilton at nickel corner. There’s a lot of talk about who the Steelers should resign at the spot between both the two. At this point, it really might be neither due to how the front office decides to spend their money, but if they do choose one over the other it’ll be interesting to see what skill set they choose. While I think Sutton is a clear cut winner in coverage and ball skills, I’ve never seen a corner blitz and play the run like Hilton. While Hilton is no slouch in coverage either, his skillset leans more so to being a mini-linebacker.

Sutton really struggles in the physicality part of his game as a blitzer and as a run stopper. The disappointing part is it really seems like a lack of “want to”. While it’s hard to expect any cornerback to throw his body around and play the run game like Hilton, Sutton often is up against receivers and shows no effort to try to shed blocks and make a play on the ball carrier. As seen below, here are a couple of the many clips I could have pulled from Sunday that were far from great.

While it wasn’t a perfect game for Cam Sutton, it certainly was one of his better games in the NFL. He continues to stand out on one of the league’s best defenses, which unfortunately for the Steelers and fans alike will likely mean that some NFL team out there will be willing to give him a nice payday come free agency time. For now, with Mike Hilton likely to be back this week against the Jacksonville Jaguars, Sutton will likely see his responsibilities return to that of the first quarter of the season.