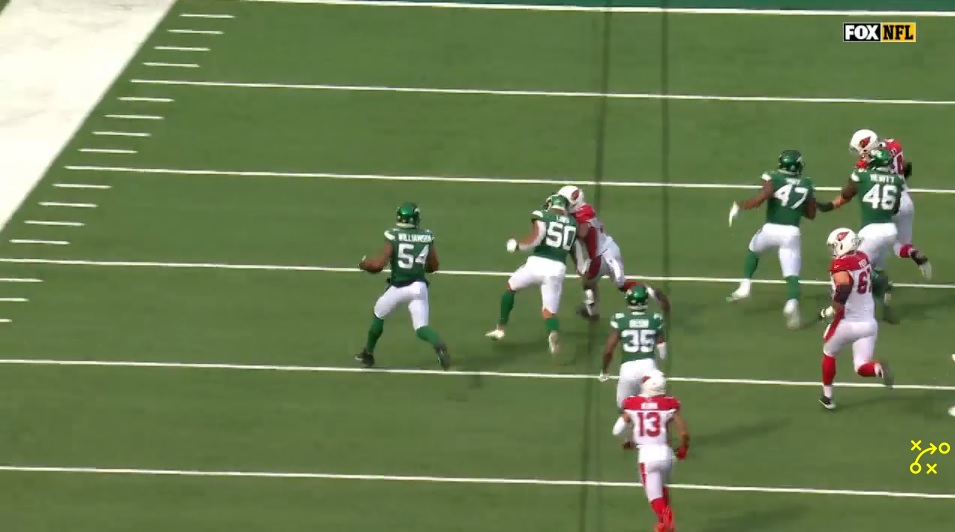 The Pittsburgh Steelers made some extra noise after beating the Baltimore Ravens Sunday night, hammering out a deal with the Jets for LB Avery Williamson. Pittsburgh’s hurting for linebacker depth after Devin Bush and Ulysees Gilbert III’s injuries so on that level on, a trade made sense ahead of Tuesday’s deadline.

So what are the Steelers getting in Williamson? Let’s take a look.

Williamson Vs The Run

Williamson is a solid linebacker against the run, similar to the guys they already have in Vince Williams and Robert Spillane. On tape, he’s a sound, fundamental tackler who gets off blocks, finds the runner, and finishes the play. Couple examples of that strung together in the clips below. They all show the same overarching idea. Williamson is #54 in all these clips.

Here, watch him take a good angle to the runner and flow down the line to make the tackle against the Colts.

You’re seeing someone who doesn’t overpursue, breaks down, and has enough pop to finish with some authority. He’s never going to kill you in the run game, even if he’s not going to make a ton of big plays. 59 tackles this season, zero for a loss, though the Jets are certainly a much worse defense and aren’t nearly as aggressive with their off-ball linebackers.

Again, similar dude to someone like Williams or Spillane. I don’t know if he’s quite as good of a processor but his use and skillset isn’t too different. This year, the Jets have used him often as a zone dropper. Hook zones and curl/flat. Keep eyes on the QB, tackle the catch. Williamson shows the same traits in the pass game as a runner. Reliable open field tackler who shows some pop in space.

But he’s far from perfect either. His 2020 stats have him down for an interception and couple pass breakups but none of them are individually impressive. His INT came off a defensive linemen’s tipped pass, one breakup came on a bad throw against Denver, and another came on a fluky bouncing ball in Week 5 against the Arizona Cardinals.

Here, this is a tough draw against Travis Kelce yesterday but Kelce makes quick work of him in a rare instance of Williamson in man/zone match.

One big draw of Williamson is his, to steal the Tomlin term, “all-situations” experience. He has plenty of work as an every-down linebacker. Over the past three weeks prior to this weekend’s Chiefs’ game, here was his snap percentage count.

In 2018, he played 99.5% of the Jets’ defensive snaps. And aside from that 2019 torn ACL (Adam Gase wrongly let him play deep into a preseason game and he blew out his knee), he’s been very durable. He never missed a game in his four seasons with Tennessee, played all 16 in 2018, and seven of eight games this season. So he’ll be available.

The skinny on Williamson.

– Plays the run hard and takes on blocks, good hand use and doesn’t get stuck
– Patient against the run, rarely out of position, plus vision
– Wrap-up, reliable tackler with good hit power
– Experience as an every-down, all-situations player
– Steady, consistent player who doesn’t get too high or too low
– Gets depth in zone coverage and closes on the ball, breaks down in space and limits YAC

– Average to below average athlete who does his best work in a phone booth, not in space
– Hard to trust in man coverage against tight ends and backs, will lose a lot of footraces
– Doesn’t make many splash plays in any area of his game

So big question. What is Williamson’s role with the Steelers? That seems up in the air. There’s little doubt in my mind the Ulysees Gilbert III played a role in the decision to deal for Williamson. UG3’s back injury may be an ongoing thing, dealing with it throughout college, getting shutdown because of it his rookie year, and now having it flair back up after playing just 42 total snaps this season. Behind Spillane and Williams, they had nothing. Next up was LB/S Marcus Allen who himself has limited playing time.

Is Williamson going to displace Spillane? It’s possible with time and I know the Ravens ran all over the Steelers Sunday, but Spillane has still played well and earned the respect of his teammates. Pittsburgh sending him to the bench isn’t generally how they do business, especially with Spillane being the signal caller.

What about dime? Again, possible and my initial thought. But Williamson is no great cover linebacker. Dime packages is when you most often get the Steelers playing dime defense, the ILB often taking the RB (or blitzing if he stays in). That’s not his game.

Is it possible Williamson is just straight depth? If I was Mike Tomlin, that would be my angle. Sit behind Williams and Spillane. In dime, use Marcus Allen or UG3 if/when he returns. Heck, I think I’d rather have Spillane in dime over Williamson. There isn’t a huge difference between the two guys but Spillane will only get better with more experience and playing time and had a couple of impactful plays in coverage against the Ravens (pick six and breakup on JK Dobbins). Williamson is maxed out at this stage of his career.

Williamson can be next man up if there’s another injury as a base/nickel run stopper. And of course, play special teams and as a sure tackler, will do well there.

Pittsburgh gave up next to nothing to acquire him. 2022 5th rounder in exchange for Williamson and a 2022 7th. By then, the Steelers will get a slew of comp picks from all their upcoming free agent losses (Bud Dupree, possibly JuJu Smith-Schuster, Mike Hilton, Alejandro Villanueva, James Conner, you get the idea) so that 5th year two years from now is totally expendable.

And if all Williamson becomes is comfortable, veteran depth, a good locker room guy, who doesn’t play much aside from a spot start if/when someone gets hurt while contributing on special teams? Fine with me. Williamson is protection against another injury that would really put Pittsburgh in a bind if they lost Williams/Spillane, even for half of a game. It’s hard for a trade like that to go bad regardless of what the rest of the season holds.