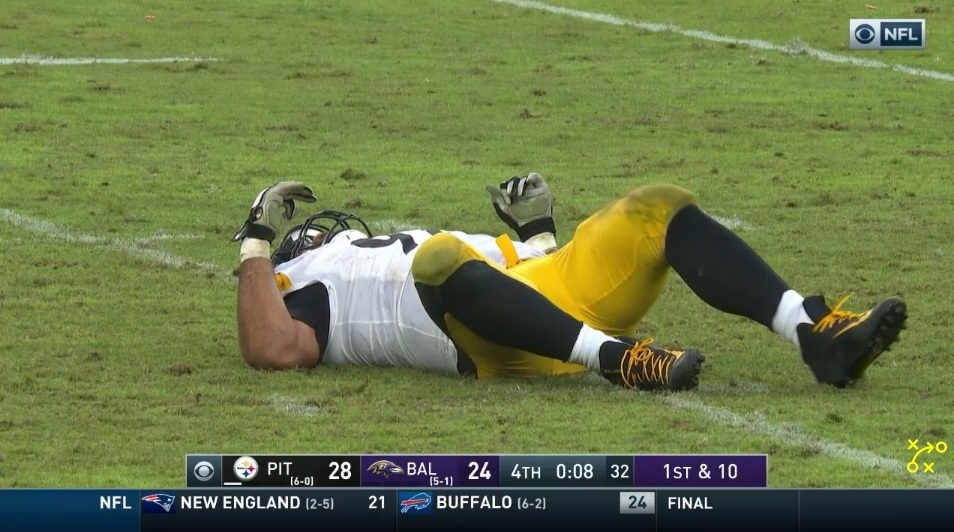 Cam Heyward gave all he had in Sunday’s win over the Baltimore Ravens, leaving the game twice due to a leg injury. Though he needed help off the field the second time, his injury isn’t considered serious, per the PPG’s Gerry Dulac. He tweeted the news a short time ago.

The nature or extent of Cam Heyward's injury that forced him from the game on the final drive was not detailed by Mike Tomlin. But Heyward is OK and his injury is not serious.

Heyward twice left the game in the final five minutes. He missed only a few plays the first time, possibly signaling cramping. His second injury seemed more serious, helped off the field by Jay Elliott and ??? with nine seconds left. He pointed to his left leg/knee before making his way to the sideline.

Mike Tomlin didn’t provide an update on his status after the game. Heyward was one of two Steelers’ defensive linemen injured Sunday. Nose tackle Tyson Alualu left the game after a nasty looking (but legal) cut block from FB Patrick Ricard.

I dont see where Tyson Alalu could have gotten hurt except here. This helmet to right knee could have swelled up. He play a few more plays after this till Buggs came in for him. He didnt return @Girlsurgeon @Alex_Kozora #steelers pic.twitter.com/ULYogBJi5P

Alualu remained on the sidelines for the rest of the game, also indicating his injury isn’t overly serious. But Tomlin didn’t provide an update on his status either. Pittsburgh finished the game with just three defensive linemen: Stephon Tuitt, Isaiah Buggs, Henry Mondeaux. Though that really amounted for just one play, Lamar Jackson’s heave into the end zone broken up by Minkah Fitzpatrick.

The NFL trade deadline is Tuesday at 4 PM. It’s possible the team makes a move if Heyward or Alualu are expected to miss time. It’s also possible they poach someone off a team’s practice squad, perhaps bringing back Daniel McCullers who is on Chicago’s taxi unit right now.

Sunday’s game produced injuries to both teams trenches. The Ravens lost RG Tyre Phillips early in the game and then lost star LT Ronnie Stanley. Stanley will miss the rest of the year with an ankle injury.