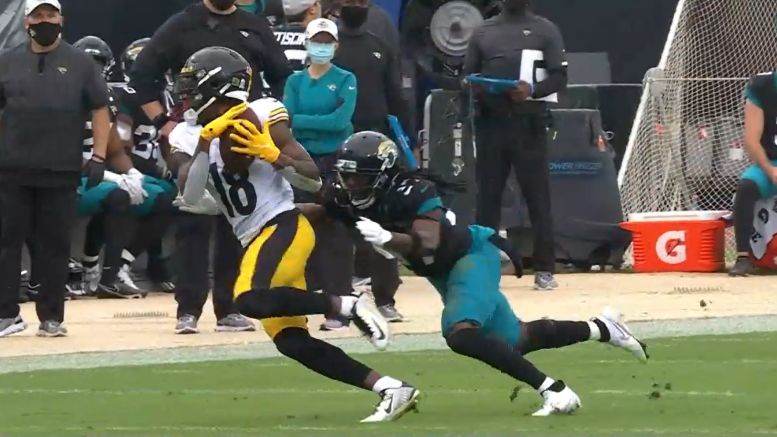 Second-year Pittsburgh Steelers wide receiver Diontae Johnson had a big game last week against the Cincinnati Bengals. Or perhaps it would be more accurate to say that he had a big half. In the first half of the team’s previous game, he caught six passes for 116 yards and a touchdown.

That was his first 100-yard game of his career, his previous career high coming back in week two of the season when he picked up 92 yards and a touchdown against the Denver Broncos. That would be the last complete game he would play for three weeks, but he looks to be up to full speed by now.

Johnson had another big half on Sunday against the Jacksonville Jaguars. On 10 targets, he caught eight receptions for 97 yards, nearly having a 100-yard half for the second week in a row after never going over 100 in a single game prior to that.

Of course, Johnson spent most of his rookie season lining up with Mason Rudolph and Devlin Hodges at quarterback, neither of whom had ever thrown a pass prior to the start of the 2019 season, so it wouldn’t exactly be surprising that he did not get off to a high-volume start.

He would go over 100 yards early in the second half, giving him his second straight game with 100 yards. Unlike last week, he would not be shut out during the final 30 minutes of the game. He would pick up another couple of catches on the next drive for the Steelers, including a nice extension on third and short, though he was ruled just short. Running back James Conner shook one tackle to easily get the edge for a nice gain to convert.

In all, he would finish with his first double-digit-reception game of his career, catching 12 passes on 16 targets for 111 yards. He didn’t have a hugely productive second half—the offense as a whole was somewhat lethargic, if we’re being honest—but the work he put in during the first half was big.

A couple of Johnson’s first-half receptions were critical in sparking scoring drives, though he himself is one score behind JuJu Smith-Schuster for the second-most receiving touchdowns on the team for the season. His four scores are one behind what he had during his rookie year.

His back-to-back 100-yard games are the first for a Steelers player since Smith-Schuster in weeks 11 and 12 in 2018. He caught 21 passes for 293 yards and a touchdown during that span. Over this two-game run, Johnson has caught 18 passes for 227 yards and one touchdown.

On the season, he is up to 49 receptions, 10 off of his rookie total, for 537 yards, and four touchdowns. He has six more games to add to his totals, and the most remarkable thing about it is the fact that this was essentially done over seven games, because he had a three-week span in which he played just 25 snaps, catching one pass for minus-two yards.