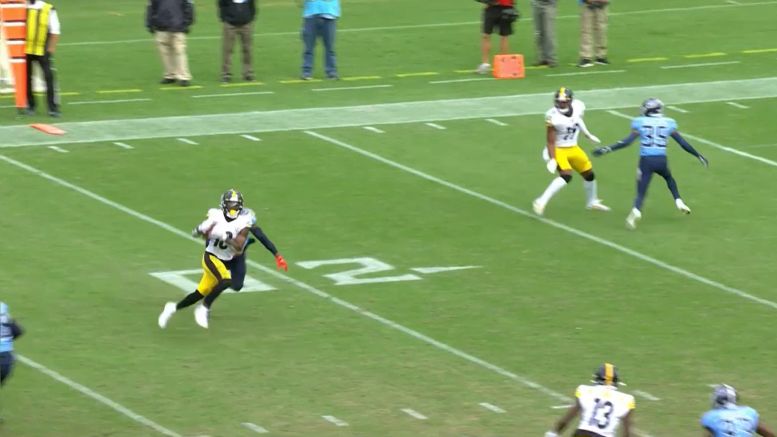 There is nothing more annoying when you’re trying to build momentum than dealing with nagging injuries. Just ask Diontae Johnson, who is trying to get himself up and running in 2020, his first full season with the opportunity to work with Ben Roethlisberger at quarterback for the Pittsburgh Steelers.

The second-year wide receiver has already suffered three separate injuries since the regular season began, starting with a concussion week three, a back injury week four, and an ankle/toe injury against the Titans. That doesn’t even include his injuries issues that he dealt with in training camp.

He just made it back from his back injury to play in week seven against the Titans and was having a big day, catching nine passes for 80 yards and scoring two touchdowns through the air, but he was tackled a bit awkwardly on his final reception, an eight-yarder converting on 3rd and 7, and left the game.

Fortunately, that injury did not prove to be serious, something that he said immediately after the game, and his week of practice confirmed it. He only missed the very tail end of the Steelers’ offensive snaps in Tennessee, so he doesn’t see this as a setback.

“Yeah, I feel like I’m on track”, he told reporters on Wednesday. “Like I said, injuries are a part of the game. I was happy to be back, coming off the little injury that I had. I’m just trying to look forward to this week, to be honest. It’s a great defense, and we’re going to be ready. We’ve just got to make plays for Ben and help him out and make him look good at all times and make sure we’re on our assignments. We should be fine”.

I like the fact that he is more focused on the game and achieving victory than he was in specifically answering the question about himself. Besides, he knows the importance of his own role within the team’s collective achievements.

Johnson caught five of eight passes for 27 yards last year in the Steelers’ first game against the Ravens, in which Mason Rudolph was knocked out during the second half and replaced by Devlin Hodges. He combined for nine receptions for 129 yards and two touchdowns in the two games leading up to it. He added four catches on seven targets for 54 yards in the finale.

Of course, neither of those games were with Roethlisberger. He was able to find some success against Baltimore’s top corners with lesser quarterbacks throwing to him, so I’m looking forward to seeing him work against Marcus Peters with a Hall of Famer under center.