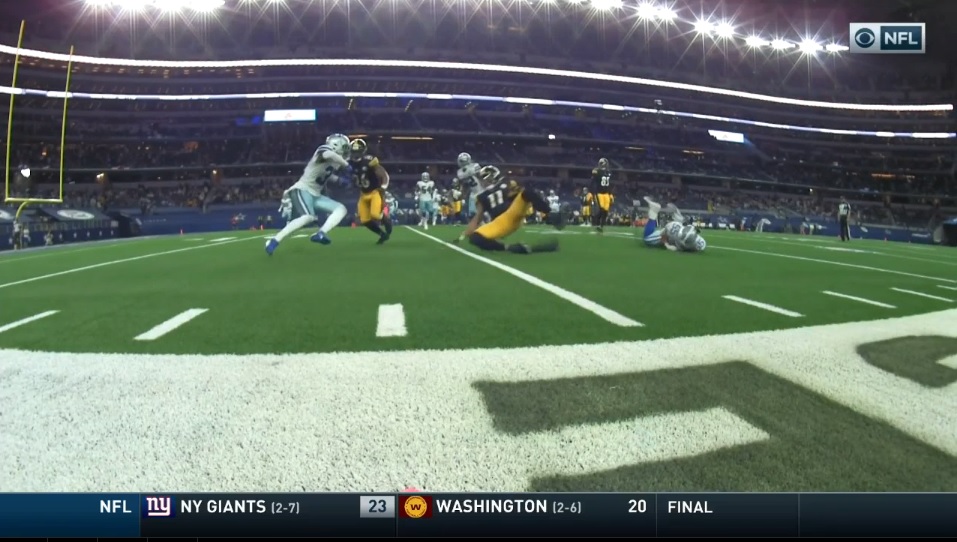 Mike Tomlin’s decision to go for it on 4th and 1 in the final minute of Sunday’s win over the Dallas Cowboys was controversial. Even moreso had Garrett Gilbert brought his team to victory on the final play of the game. Tomlin’s decision – and the Cowboys’ final drive – could’ve been avoided entirely had the Steelers converted on 3rd down. Chase Claypool took the handoff on a WR jet but slid short of the sticks in order to keep the clock rolling. That led James Conner’s failed 4th and 1.

He tweeted that shortly after the game too so clearly, it was on his mind. Here’s the play. Claypool took the handoff on 3rd and 5, coming up just short of the marker.

Credit to the Cowboys and LB Leighton Vander Esch for making the diving tackle. But it’s obvious Claypool was just as focused on getting down, sliding down awkwardly at the end as opposed to diving ahead for the extra yard. Clearly, the coaching staff put an emphasis on staying inbounds to keep the clock ticking. But at 6’4, 230 pounds, odds are good Claypool picks up the first down if he doesn’t give himself up, even if that meant going out of bounds. Moving the chains while getting knocked out of bounds still ends the game. Pittsburgh would just need two kneeldowns instead of one.

Claypool did the same under less intense circumstances in the Week One opening win against the New York Giants. He took the handoff on 4th and 1, picking up the first down, and then sliding inbounds to keep the clock rolling to finish out the game. Of course in that instance, he went down after getting past the first down line as opposed to yesterday, where he was committed to going down before it.

That led to a failed 4th and 1 run by James Conner. Dallas got the ball back with under a minute to go and marched down the field, able to throw a pass into the end zone on the final play that was luckily broken up (again) by Minkah Fitzpatrick.

There’s obvious risk/reward here. Tell your guys to pick up the first down no matter what and you can close out the game. The downside is you might fail to pick it up and get run out of bounds. James Washington foolishly did that at the end of the half a few weeks ago against Cleveland. But Claypool is capable of making the play, there’s a reason why you’re putting the ball in his hands as opposed to a plain jane dive up the middle, and that would’ve ended the game without any of the…let’s call it theatrics that followed.