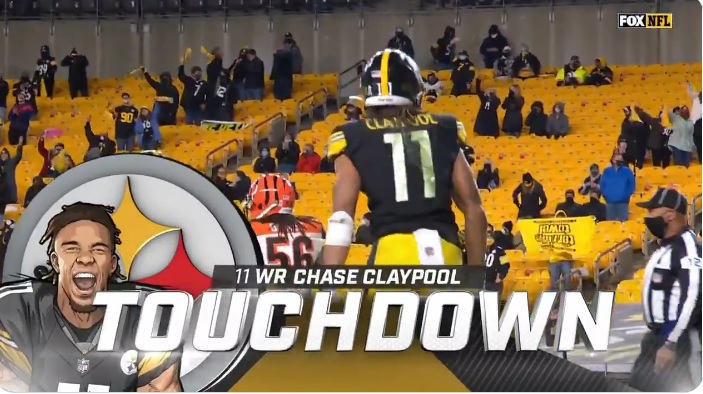 I doubt any of the numbers in this article will surprise you, given how well Chase Claypool has performed this year. But it’s worth putting his season into context. Despite all the obstacles of being a rookie in this draft class, Claypool may end this season owning several team rookie records.

The current Steelers’ record holder for rookie receptions is Troy Edwards’ 61 (ok, maybe that’s not impressive company) set in 1999. The rookie record for yards is held by JuJu Smith-Schuster’s 917 while the leader in rookie touchdowns goes to Louis Lipps’ nine.

Should Claypool finish with that prorated stat line, he’ll edge out Edwards for the receptions record, blow away Lipps’ mark for scores, and finish third in yards behind Smith-Schuster and Jimmy Orr. But all Claypool needs is another big game, connecting on a couple of deep balls that have narrowly missed lately, to finish first in yards too.

Hitting all three marks would make him the second Steelers’ rookie receiver since 1950 to set the record in each of the “big three” categories, joining Lipps’ 1984 season. Pretty incredible stuff.

And if Claypool hits the 12 touchdown mark he’s on pace to reach? That would threaten NFL history. Probably not first place, that’s held by Randy Moss’ 17, but twelve scores would tie him for fourth most all-time. He’d join great company like: Mike Ditka, Odell Beckham Jr, Mike Evans, and Bullet Bob Hayes.

Claypool has been so successful for a multitude of reasons. His maturity, NFL readiness, taking care of his body, getting and staying in great shape, and showcasing a high football IQ for someone in his first year. He’s also really impressed as a route runner, something we’ll highlight in a video later on in the week.