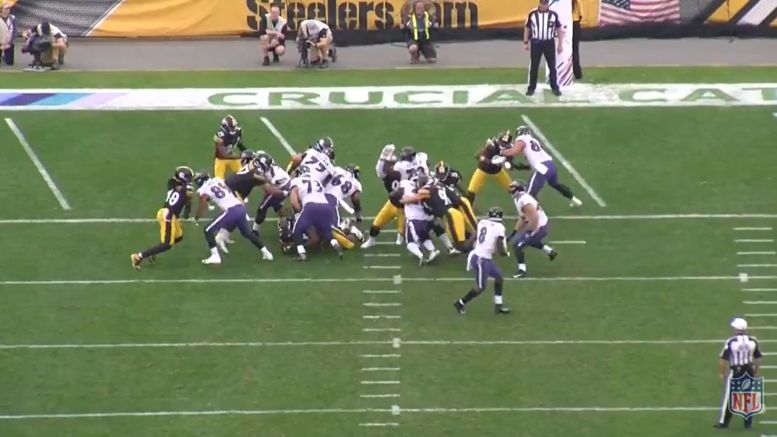 Topic Statement: The Steelers’ run defense will put the kibosh on the Ravens’ run game.

Explanation: The Steelers, when factoring in their opponents, probably have had the best run defense in the NFL, and their numbers improve dramatically by removing the one outlier run by Miles Sanders. The Ravens have one of the best rushing offenses in the NFL, but the Steelers just handled a couple of the best.

Everybody thought the Browns’ running game would give the Steelers fits. They entered that game averaging 188 yards on the ground per game. They managed 75 yards. Then it was the Titans and rushing leader Derrick Henry. He managed 75, and the team 82. This is a defense that has already answered the bell against elite rushing attacks.

And the Ravens aren’t even as good as they were last season on the ground. While they did allow Jackson to run a bit on them a year ago, in that first game, they held Mark Ingram to 44 yards on 19 attempts, and Gus Edwards had 17 yards on five attempts.

Jackson’s carries in that game were more of a nuisance than a problem. Most were on 1st and 10, and his longest gain was eight yards. He converted just once on the ground on third down.

The difference between the running games of the Browns and the Titans is that it really didn’t incorporate the quarterback position. The Ravens’ running game is unlike any other except perhaps for the Cardinals, maybe the Patriots and the Bills. But outside of Kyler Murray, Jackson is obviously the undisputed top rushing threat from the quarterback position, and runs a run-first offense, of which he is a significant part.

Even last season, Jackson did manage to run for 70 yards against the Ravens despite throwing three interceptions and getting sacked five times when he drops back. As long as Baltimore doesn’t fall behind, the run game is going to be a 60-minute headache with a platoon of effective rushers running behind one of the top offensive lines in the league.