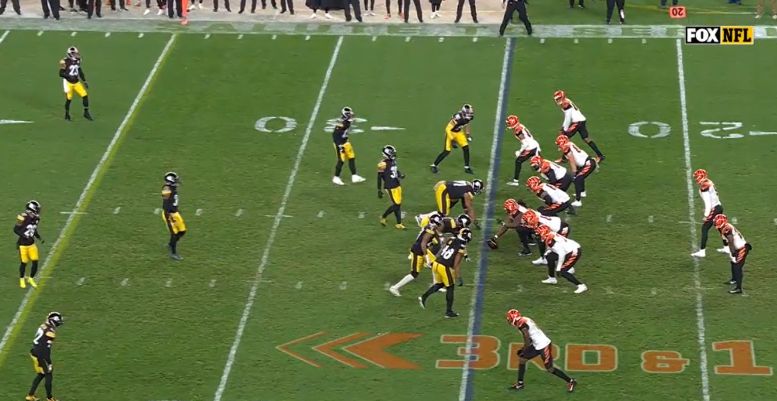 Topic Statement: The Steelers will continue to expand their use of the ‘dime’ defense that features Marcus Allen as a linebacker in addition to six defensive backs.

Explanation: The Steelers have, to our data, played 129 snaps in a ‘dime’ defense this season. Of that number, 34 have featured Marcus Allen as the dime ‘linebacker’, who has played in addition to six defensive backs, and they have come over the past three games. Of those 34 snaps, 20 came on Sunday.

While the 20 snaps against the Cincinnati Bengals was surely game-plan specific based on what they anticipated that the Bengals would do offensively, the past three weeks have clearly established this as their ‘dime’ package, with either six or seven defensive backs on the field depending on how you want to classify Marcus Allen, whom the team has consistently listed as a linebacker this season.

Allen is a player whom the team has described, like rookie Antoine Brooks, as half a linebacker, half a safety. He gives them a more diverse look as somebody who can be more adept in coverage than a linebacker, but stronger against the run than your average safety.

Given that they’re generally in dime in passing situations, and Devin Bush and Ulysees Gilbert III are not available, Allen is their best option as a coverage linebacker. That’s why he has been out there for the past three weeks, and defensive coordinator Keith Butler has basically said that this is their plan.

But Allen’s role in this alignment has also coincided with the absence of Mike Hilton. When Hilton returns, a defensive back who is strong against the run, they may feel more comfortable putting a different linebacker on the field, and Robert Spillane has played a fair number of snaps in that role already.

The other factor here is Avery Williamson. There is a sense that the Steelers want to get him playing time, and this would be the package to get him on the field, especially with Hilton back. Gilbert was briefly the dime linebacker before his injury. They presumably acquired Williamson because they thought he could offer something in coverage (whether that proves to be the case or not).