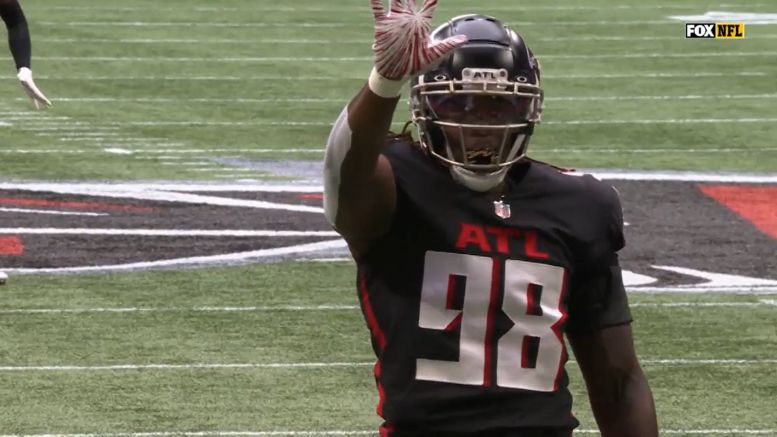 There were a couple of Pittsburgh Steelers fans this week who were hoping to see the Pittsburgh Steelers submit a waiver claim for former first-round edge defender Takkarist McKinley, who was recently released by the Atlanta Falcons after three and a half seasons. They did not.

Even if they did submit a claim and were awarded the player, he would not be able to be on the field this week because of the Covid-19 protocol that requires that players go through a five-day testing cycle. But he will be a part of the team that they will be playing on Sunday, because the team awarded the claim was the Cincinnati Bengals, who just leg go of Carlos Dunlap.

The Falcons selected McKinley, out of UCLA, just a few picks ahead of the Steelers in the first round that year, who used their selection to add T.J. Watt. Atlanta has clearly come to regret the decision, and Jerry Jones, the owner of the Dallas Cowboys, also recently acknowledged that they erred in taking Taco Charlton over Watt as well.

Of course it’s an easy call to make when you have a player as great as Watt. The only edge defender in that class who could even compare is Myles Garrett, and he was the first-overall draft pick (rightly so, based on talent and college resume).

Heading into 2020, the Falcons declined McKinley’s fifth-year option. He personally revealed that he had previously requested to be traded after the trade deadline passed last week. He had only played in four games so far this season in rotational work, accumulating eight tackles and one sack, unblocked in week one against the Seattle Seahawks.

For his career, he has posted 79 tackles with 22 tackles for loss. He has recorded 17.5 sacks, with two forced fumbles, one recovery, and two passes defensed. This all came over 49 career games, of which he has been credited as starting 25, over 1650 defensive snaps.

According to the team’s website, the Bengals were high on McKinley coming out that year, and considered a trade-down scenario from the ninth spot in order to select him, but they ended up staying put and drafting John Ross. Frankly, they might as well have just drafted McKinley at nine considering what they have gotten out of Ross, who is also unhappy.

At the moment, Carl Lawson is the team’s leading edge defender. Sam Hubbard has been on injured reserve. He has been designated for return, but it is no clear if it’s anticipated he will be activated to the 53-man roster in time to play against the Steelers on Sunday.