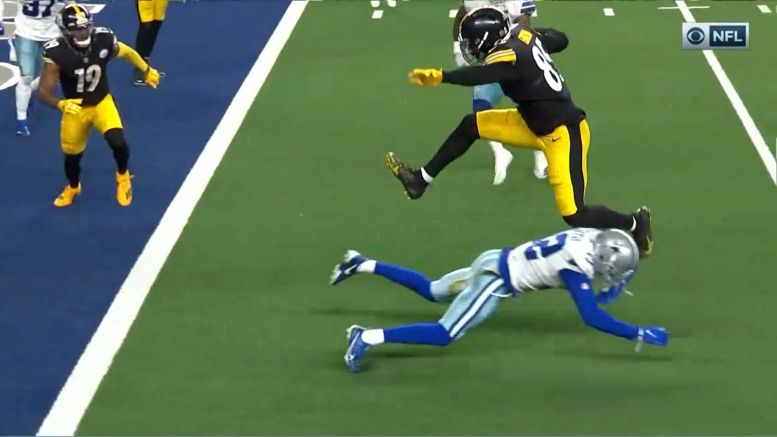 The Pittsburgh Steelers didn’t have a lot of financial wiggle room for ‘splash’ in free agency this year, but they did manage to land a Pro Bowl tight end coming off of a down year, and as the season progresses, he is beginning to look more and more valuable on that two-year, $12 million contract.

Eric Ebron finished the game with just three catches for 22 yards, but all of them were big, and his third reception put the Steelers on top late in the game, giving them the margin for victory to close out the game and send them to an 8-0 record through the first half of the season.

“He’s one of the guys [that I’m referring to] when I say ‘the skill guys’”, Ben Roethlisberger said after the game, referring to Ebron, “and I’m proud of him. I’m moving him around. I mean, he’s playing outside spots, he’s playing inside spots”.

The veteran tight end’s three catches all came on critical drives. At the end of the first half, he made a big nine-yard reception on 3rd and 6 that put the ball into field goal range at a time that the Steelers were trailing 13-0. He made another significant five-yard catch that one play later led to James Washington’s 17-yard touchdown for their first points of the evening.

He wouldn’t land another catch until late in the fourth quarter, taking a flat route on 2nd and 5 into the end zone from eight yards out to put the Steelers on top, 24-19, leaping over a defender near the goal line in order to do so, for his third touchdown of the season and second in as many weeks.

“On that play, when I called it, really, it was more of a thought that he’s gonna run a flat and maybe pick up five or six yards, same thing as usual, get the ball out of my hands and get it into the playmakers’ hands”, Roethlisberger said about the touchdown. “As soon as he caught it, he turned it up, and I was excited that we were at least gonna pick up yards”, he said. “The next thing you know, he’s being a freak athlete and jumping people and scoring, so I was happy for him”.

On the season, through half of the year, Ebron now had 29 receptions for 285 yards and three touchdowns. That would put him on pace to finish the season with 58 catches for 560 yards and six touchdowns, given that we are on the halfway point of the year, but there is plenty of reason to believe that the pace of his production can pick up in the second half of the season.

The most important thing is that Roethlisberger has been giving him opportunities to make plays in important spots, and he has been making them. While he has some dropped passes this year, overall, Ebron has been reliable when called upon, and has been the sort of athlete that they signed up for.