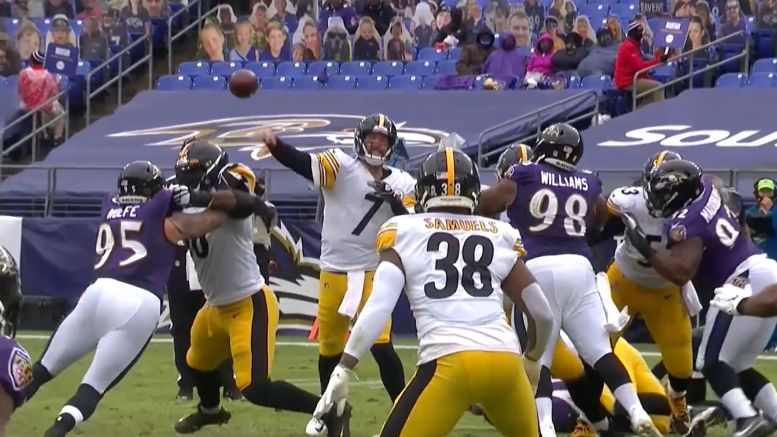 It was a tale of two halves for the Pittsburgh Steelers, particularly with respect to the passing offense, which was dead in the water for the first two quarters. It wasn’t exactly explosive in the second half, either, and some of their biggest plays were drawing pass interference penalties, but it was an effective possession-control offense, and it helped to turn things around.

After completing just four of 10 passes in the first half for 24 yards, Ben Roethlisberger picked up the pace in the second. At the time that they retook the lead in the fourth quarter, he had gone 16-for-21 for 152 yards and touchdown passes to Eric Ebron and Chase Claypool, pushing his passer rating north of 100.

“In the second half, we kind of just went to a no-huddle with a personnel group that was newer. We’ve got to get guys in matchups”, Roethlisberger said after the game. Roethlisberger stressed matchups heading into the game as well, so the approach that they took in the second half actually shouldn’t be surprising for those who were paying attention.

That grouping was a four-receiver, no-running-back, empty set, that featured Ray-Ray McCloud as the fourth wide receiver in addition to JuJu Smith-Schuster, Diontae Johnson, and Chase Claypool, who has seemingly already cemented his status as a full-time player (and scored his seventh touchdown of the season as a game-winner yesterday).

“I know throughout my whole career, people say I always play playground backyard football”, he added later. “Today, it was in its truest form. That’s why I tip my cap to all of the skill guys. I basically would tell them, ‘here’s the protection, and everyone else do this’. There were plays when I would say, ‘hey, JuJu, you run this. Ray-Ray, you run this. Ebron, you run this’”.

Considering how poorly everything was working in the first half—and to be clear, it wasn’t just a matter of play-calling, the offense, particularly in the passing game, was simply not executing plays—the change of pace of the no huddle coupled with the novelty and unpredictability of the formations and route combinations proved to be effective enough to move the ball when necessary.

What does this mean going forward? I would think, not much. They are probably not going to be in this situation again, considering that the Ravens have the best and most aggressive quarterbacks in the league and were facing them coming out of a bye week.

Roethlisberger will of course get his no-huddle action and call his fair amount of plays, but that has long been true, especially since Randy Fichtner took over as offensive coordinator. Perhaps the biggest takeaway from this was McCloud’s further emergence into the offense—and at the possible expense of James Washington, who in the past two weeks has only played 28 snaps.