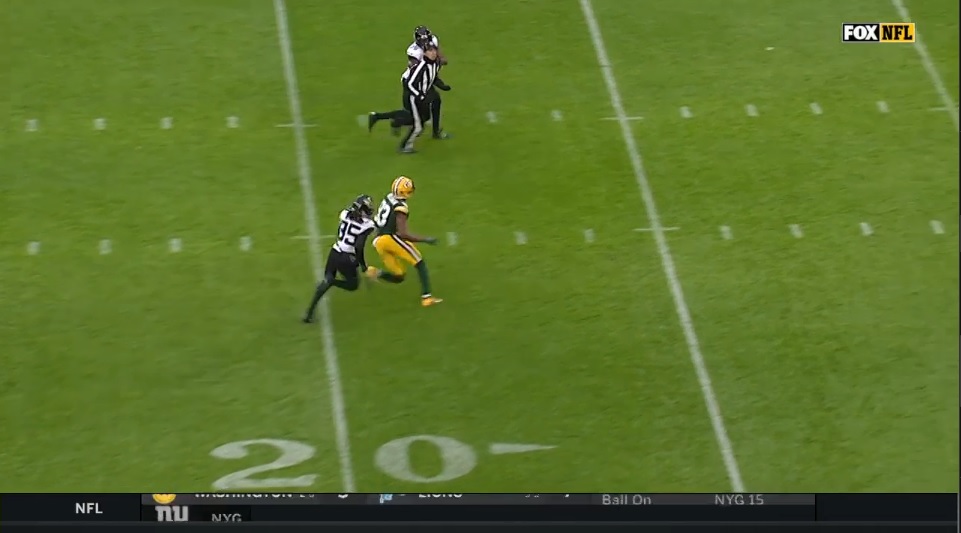 The Packers line up with two tight end to the left on the end of line and two receivers to the right in tight splits.  The running back is flanked to the right of the quarterback.  The Jaguars counter with a base 4-3 look with a safety near the linebackers giving them 8 in the box.

At the snap safety Daniel Thomas (20) who was in the box will rotate to the deep safety in the middle along with the corners to make it a Cover 3 look. Underneath it looks like a matchup Zone coverage with linebacker (44) Myles Jack, safety Jarrod Wilson (26) and Edge K’Lavon Chaisson (45) dropping into coverage.

For the Packers tight end Robert Tonyan will run a Go routed from the left wing and tight end Marcedes Lewis will run a curl route to the middle of the field.  The Go route takes the corner deep with him and the curl route in the middle of the field takes Chaisson with him and he positions himself in the pathway of Jack. Underneath the curl route Davante Adams (17) will run a shallow crossing route through an area that was cleared out by these two routes.  Adams takes a three yard pass turning it into and 18 yard gain.

Steelers Scenario – This would fit in what the Steelers do as they use this offensive alignment and like the shallow crossing routes. Eric Ebron would likely run the Go route with Vance McDonald run the curl/rub routed in the middle.  Hit Diontae Johnson on the shallow cross and let him create after the catch.

With the Packers driving late in the second quarter the Jaguars have seven defensive backs on the field.  They will drop two safeties deep and play Man coverage underneath. The Packers have 3 receivers split to the right, one to the left and a tight end on the left as well.

To the left the Packers have WR Marquez Valdes-Scantling (83) in a tight split to the left and he’ll run a corner route with C.J Henderson (23) covering him. Tonyan will run an angle route with safety Andrew Wingard (42) guarding him.

To the right on the outside they have split running back Jamaal Williams (30) wide to the right and he runs a quick In with Jack in tow.  Inside they have Adams in the tight slot and Equanimeous St. Brown in the slot and the will run tandem skinny Post routes. Adams is shadowed by Sydney Jones (35) and Tre Herndon (37) trails St. Brown.

QB Aaron Rodgers (12) will read the deep route to the left first before stepping to his right to avoid the rush. The corner route to the left pulls the safety that way. The tandem Post routes to the right both press to the outside and give little head fakes to the outside before angling inside and this helps widen the safety to that side. With both defensive backs in Trail man coverage and only one safety over the top it gives Rodgers a chance to drop a throw in over the top.

The fake by Adams to the outside is the most effective freezing Jones for a split second allowing him to open up a little space and the safeties are too wide to provide help. Rodgers makes an accurate throw high and behind Jones for a 22 yard touchdown.

Steelers Scenario – The Steelers would likely use four or five WR’s on this play. The key routes here are the deep routes and you want size on these routes for jump ball scenarios and the Steelers have three WR’s who are good on contested catches. Send James Washington on the Corner route and Johnson on the In route. On the Post routes you’d want to use Chase Claypool inside and JuJu Smith-Schuster on the outside and have Ben Roethlisberger have some solid options.

The Packers are trailing by three and are just over midfield. They have three wide receivers in tight splits to the right and a tight end inline to the left. The quarterback is under center and has a lone running back deep behind him.  The Jaguars are in their Nickel defense with a safety in the box as the third linebacker.

The Packers have St. Brown, Adams and Valdez-Scantling to the right.  Before the snap Valdez-Scantling will go in jet motion to the left and Rodgers will snap in time to show him the ball to hold the linebackers for a beat. He will instead push the ball to the running back Aaron Jones (33) breaking to his right. The Packers execute a series of effective blocks to open up a lane for Jones.

Starting from the left the tight end Jace Sternberger (87) and left tackle David Bakhtiari (69) perform cut blocks in unison to take down the backside of the defensive line.  Center Corey Lindsay (63) gets a solid reach block on DT Daniel Ekuale (99) who ends up on the ground. St. Brown and Adams perform down blocks on DE Dawuane Smoot (94) and nickel corner Herndon. The two guards release to the second level and disrupt the paths of linebackers Jack and Joe Schobert (47) and finally you have the right tackle Billy Turner (77) pulling out in front.

Steelers Scenario – Big runs are so hard to get these days and it’s all about the execution of the blocks. If this play isn’t in the Steelers play book, it should be.  Smith-Schuster, Washington and Claypool are your best blocking receivers. The first two have been used in motion but have never been handed the ball so Claypool is the motion man as he will draw the most attention.  Washington and Smith-Schuster become the blockers to the inside.  If they block it this well any RB could will get a nice gain but Anthony McFarland gives you the best chance to make it a big play.