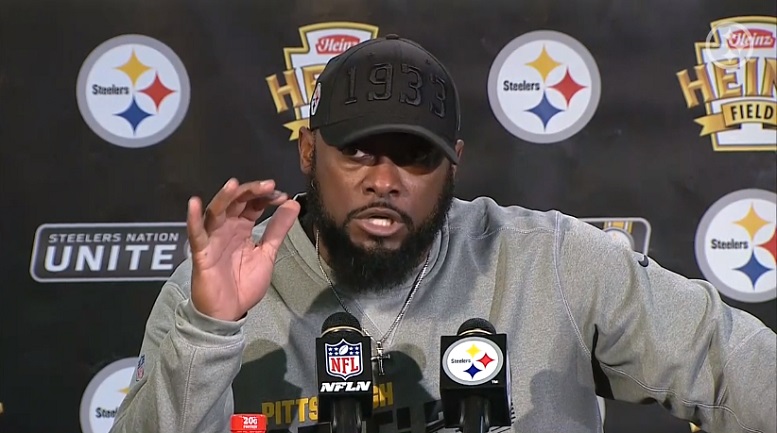 Mike Tomlin may continue to tote the “we do not care” line and at the end of the day, the Pittsburgh Steelers don’t have any say in their schedule. Thursday night, Sunday afternoon, Tuesday at 3 AM. Wherever, whenever the NFL asks them to play, they’ll play. But even the generally even-keeled Tomlin apparently couldn’t help but be upset by the news of the NFL’s decision to postpone the Thanksgiving game between the Steelers and Baltimore Ravens.

Linebacker Avery Williamson offered a brief window into Tomlin’s reaction after hearing the news of the change of plans.

“He was upset,” he told 93.7 The Fan’s Andrew Fillipponi and Chris Mueller. “Everybody’s amped up, ready to go.”

For the second time this year, the NFL has significantly impacted the Steelers’ plans. In Week 4, the team had their matchup against the Tennessee Titans pushed back to Week 7. That eliminated Pittsburgh’s originally scheduled bye week, giving them a Week Four “bye.” In practice, it wasn’t much of a vacation. Pittsburgh spent most of the week preparing for a game they thought they were going to play.

To make up for that lack of a bye, Tomlin reportedly planned to give his team a mini bye-week after the Thanksgiving game against Baltimore, giving them Friday through Tuesday off before preparing for Washington on Wednesday. That plan is out the window, too. So Tomlin’s reaction is like his players. An understandable level of frustration about the situation.

True to Tomlin, Williamson said his next reaction was to shift the team’s focus and get them ready for Sunday’s game. The approach hasn’t changed, even if the date has.

“But he just expects us to be ready and just doesn’t want it to be a distraction. Just go about our business and just to make sure that we’re ready to go, you know, get this W on Sunday.”

Former Steelers’ offensive linemen Trai Essex, who played under Tomlin from 2007 to 2011, shared his thoughts on how he assumes Tomlin is handling the news.

It’s f’d up. This was going to be the only semblance of a bye week the Steelers would have after tomorrow’s game. I understand their angst. But as I know Coach T will say, get all your bitching out NOW. Tomorrow, it’s time to move on. Control what you can control. #HereWeGo

Williamson said Tomlin did do the team a favor, giving them Thanksgiving off so they could spend it at home instead of being at the practice facility. A small silver lining to a disappointing course of events.

As Tomlin’s said all season, his mindset was to expect the unexpected. And his mantra since being named head coach is to have a plan but be light on your feet. Pittsburgh’s been forced to be as nimble as any team in football and it’s a testament to Tomlin’s unwavering mentality at the top. You can bet whatever happens on Sunday, Tomlin won’t use the change of schedule be an excuse.