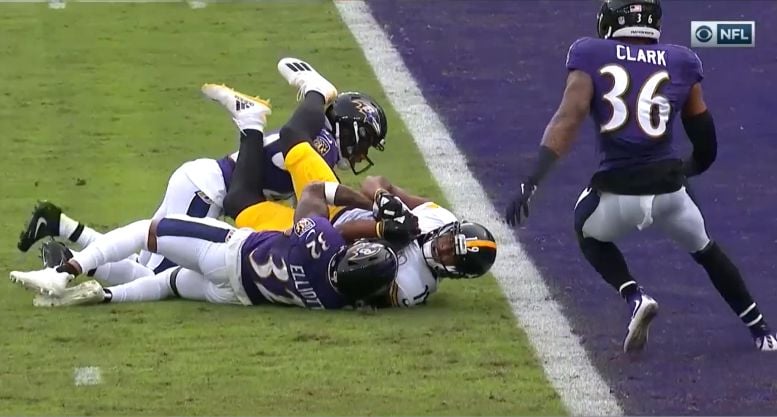 Reasoning: His stat sheets may not be screaming Pro Bowl, but the actual plays sure are making the difference on the field as the fourth-year wide receivers has transformed himself into a short-yardage, possession-downs pounder for an unselfish offensive unit.

Two years ago, JuJu Smith-Schuster was the hot new name at wide receiver in the league, and people were starting to put his name in top-10 lists for the position. He caught 111 passes that season for 1426 yards, and that was already after having a successful rookie year with 917 yards in somewhat limited work as a third receiver for much of the year.

This season? Let’s just say he’s not going to hit those numbers. Through seven games, he has 39 receptions for 346 yards and three touchdowns. He is on pace to catch 89 passes this year for 791 yards and 6-7 touchdowns. Averaging under 10 yards per reception for a wide receiver is always a head-scratcher.

And yet the plays Smith-Schuster are making are big. He didn’t even get targeted in the first half but opened the second with a 24-yard reception. On the Steelers’ next drive, he converted on 3rd and 4, then on 2nd and 13 from the Ravens’ 15-yard line used his physicality to get down to the one.

Before the game-winning Chase Claypool touchdown, Ben Roethlisberger threw four consecutive completions to Smith-Schuster (broken up by a DPI call) for 4, 5, and then 2 yards to convert, then for an 11-yard gain from the Ravens’ 11 to set up first and goal.

This doesn’t even factor in the things that he does without the ball. He has always been a willing blocker, but that has been raised in importance even more this season, especially as he seemingly becomes even more and more fixed in the slot as a mismatch presence.