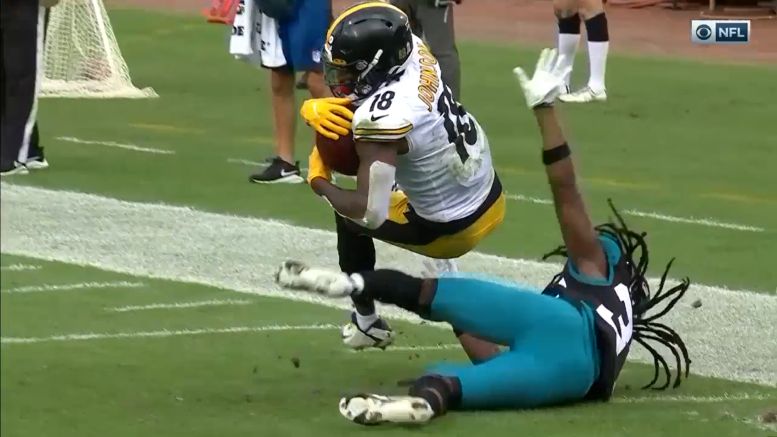 Reasoning: After missing the better part of three games earlier this season due to injury, the second-year wide receiver is back on track and continuing to build his rapport with ‘his quarterback’, Ben Roethlisberger, as the two have put up some significant numbers heading into Thursday’s key showdown with the Baltimore Ravens.

Diontae Johnson has reached personal firsts in each of the past two weeks. Against the Cincinnati Bengals two games ago, he recorded the first 100-yard game of his career—and in fact did it entirely in the first half. This past Sunday against the Jacksonville Jaguars, he recorded his first game of 10-plus receptions, his previous high being eight, now 12.

He has 18 receptions on 27 targets over the past two weeks for 227 yards and one touchdown. He nearly had another touchdown against the Jaguars, but he was ruled down at the one-yard line making an impressive double-catch that required him to reorient himself, essentially tipping the ball to himself as he played through a defender.

Of course, it might be somewhat disingenuous if we did not acknowledge the important fact that the past two teams the Steelers have played consisted primarily of backup cornerbacks. These numbers have come playing against an equivalent of Justin Layne and James Pierre, or at least Cameron Sutton.

But the numbers are the numbers, regardless, and he has been producing since he returned to health, outside of a one-catch aberration. Over the past five weeks, he has 34 catches for 390 yards and three touchdowns. Prorated over a full season, that would translate to 109 catches for 1248 yards and 10 touchdowns.

I think that’s a reasonable statline that we could expect from Johnson in the future if he should ever get a full season working with Ben Roethlisberger. He still has 49 catches for 537 yards and four touchdowns in what is essentially just seven games, given the time that he missed.

If we prorate his numbers over a seven-game average for the final six games, he should be expected to add another 42 receptions for 460 yards and three or four more scores. So we could see a final stat line for 2020 that looks something like 91 receptions for 997 yards and 7-8 touchdowns, in spite of the time missed.