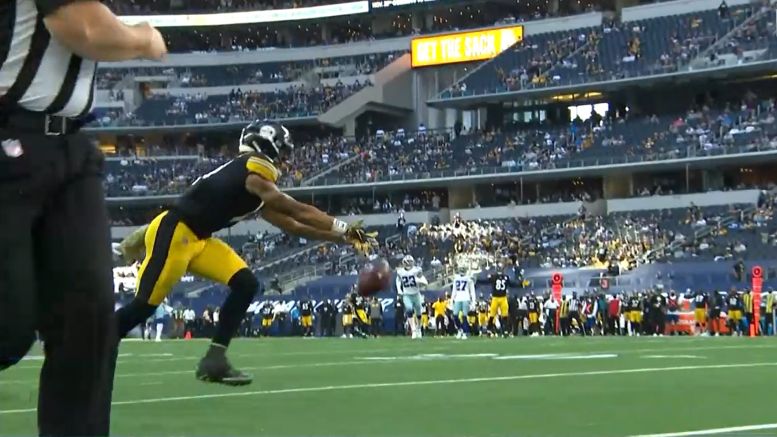 Reasoning: Even though he put up reasonably solid numbers in the end, Chase Claypool left a lot of plays on the field on Sunday in a reminder that the second-round pick is still a rookie.

Prior to yesterday’s game, Chase Claypool had only been targeted 10 or more times once before in his young career, and that was 11 times in his lone 100-yard game. On Sunday in Dallas, he set a new career high with 13 targets. He only caught eight of them for 69 yards—and some of his misses were pretty significant.

The biggest one was arguably his first miss of the day. While many fairly argue that the play could have, possibly even should have, drawn a pass interference penalty, the reality is that Ben Roethlisberger’s long pass in his direction on 3rd and 7 at the end of their opening drive was huge. If he caught that pass, he probably scores, and the Steelers never fall behind 13-0, giving Garrett Gilbert a jump start in his first start.

Even some of the catches that he did make he failed to maximize. On his first reception, going for 14 yards on 1st and 10, he slipped and fell without being touched running laterally to try to get an angle and pick up more yards. He pounded the turf in frustration.

A stern grader could argue that the rookie dropped three passes in this game, including on 2nd and 10 on the go-ahead drive late, which only a roughing the passer penalty on 3rd and 10 spared them from suffering from. He also could not reel in the two-point conversion attempt late that would have given the Steelers a seven-point lead.

That’s not to say that he didn’t make key plays. He converted on third down a couple of times, and got a lot of work on short routes that allowed him to use his size and speed to get upfield in run-game-extension-type plays.

Part of this evaluation, make no mistake, is based on the fact that he has already set high standards for himself, so he is being judged against his own body of work. This is some of the heaviest exposure that Claypool has seen in his entire career, and the truth is, he could have come out of this better.