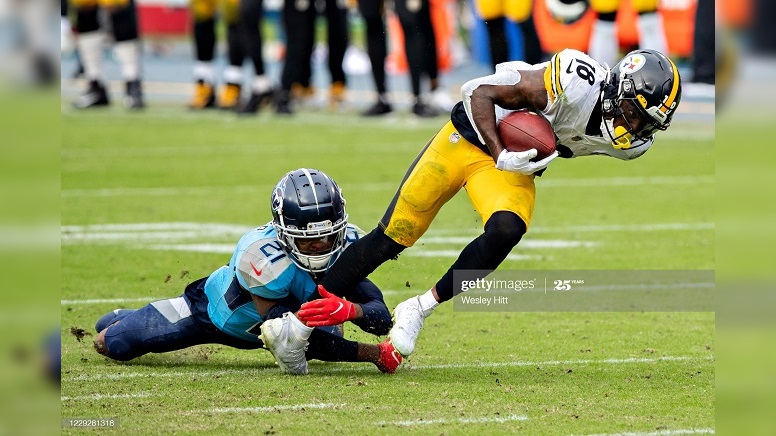 Specifically, Johnson said Thursday morning that the ankle he inured late in the team’s Sunday road win against the Tennessee Titans feels good and that he expects to practice later in the day. He went on to say he feels like he’s “back on track” after dealing with injuries the first couple weeks of this season.

Diontae Johnson said his ankle feels good and he expects to practice today.

WR Diontae Johnson said he feels like he’s “back on track” after dealing with injuries the first couple weeks. (Cc: fantasy managers)

Johnson has been banged up quite a bit so far this season and it’s led to him missing on full game and multiple parts of others. The list of injuries he’s had includes foot, toe, ankle, concussion, and ankle. He’s been on the team’s injury report every week so far this season

Johnson has played in 193 of a possible 428 offensive snaps so far this season after playing 652 total offensive snaps as a rookie in 2019. He enters Week 8 coming off his best game of the season against the Titans as registered nine receptions for 80 yards and two touchdowns in that contest.

While Johnson sounds very probable to play on Sunday against the Ravens, it will be interesting to see if he’s allowed to continue punts again. He didn’t against the Titans as fellow wide receiver Ray-Ray McCloud was tasked with that job and he did it well. McCloud also retuned both kickoffs and punts against the Cleveland Browns in Week 7, a game that Johnson missed due to a back injury.

“It’s going to be a great matchup going against these guys,” Johnson said of the Ravens.” I mean, you’ve got [Marlon] Humphrey, [Marcus] Peters and they’ve got two safeties that are great players back there. It’s going to be a matchup against those two guys or whatnot because obviously they’ve been playing for a little minute. Just because we’re young, I dont want to say we’re not going to get into no competition or whatnot.

“We’ve got a lot of weapons on the offensive side. We’ve shown that we can play with anybody we go up against. And we’re going keep that same mentality no matter, whoever it is in front of us. But were not taking them lightly. Like I said, that’s a great defense and we’re playing against a great team. It’s a rival game or whatnot. We’ve just got to go in there and do what we do and make plays and just get the W.”