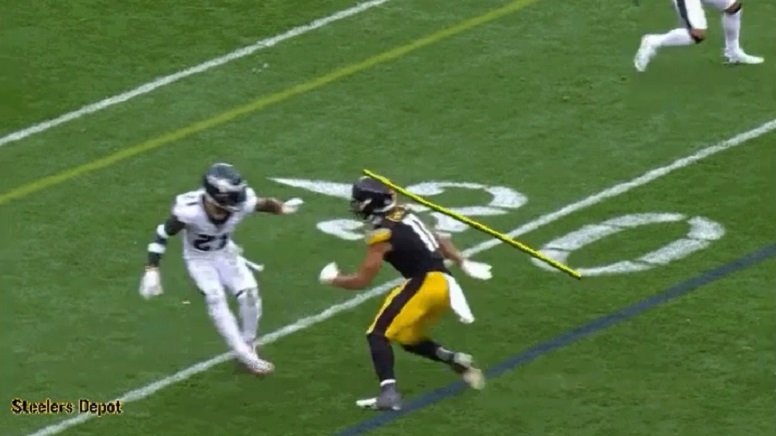 Pittsburgh Steelers rookie wide receiver Chase Claypool had a fantastic Week 5 game against the Philadelphia that included him scoring four touchdowns. So, which one of those four touchdowns was the most impressive? It probably depends on who you ask. In the case of former NFL quarterback Dan Orlovsky, who is now a football analyst for ESPN, Claypool’s second touchdown against the Eagles, a 32-yard catch and run on a slant from the left side in the second quarter, was likely his.

Orlovsky, who you should be following on Twitter, sent me a short video on Monday in which he broke down all that Claypool did well on his second quarter 32-yard touchdown reception from quarterback Ben Roethlisberger.

First, below is the television version of Claypool’s touchdown for you to watch:

Now, here’s Orlovsky’s breakdown of that Claypool touchdown that he kindly sent along for our readers to see.

With Orlovsky’s breakdown now digested, below is a better look at that route by Claypool on that play from the FOX tape.

What’s interesting is that we’ve got college tape on Claypool running that slant for a touchdown inside the deep red zone against Boston College. It’s not against as tight of coverage, but he still managed to spend that defensive back around with a nice jab step to the outside.

Please make sure you follow Dan on Twitter as he was exceedingly kind to send this video breakdown to us with permission to post, unprovoked. We hope to have him on the podcast soon to talk more about the Steelers and Claypool.