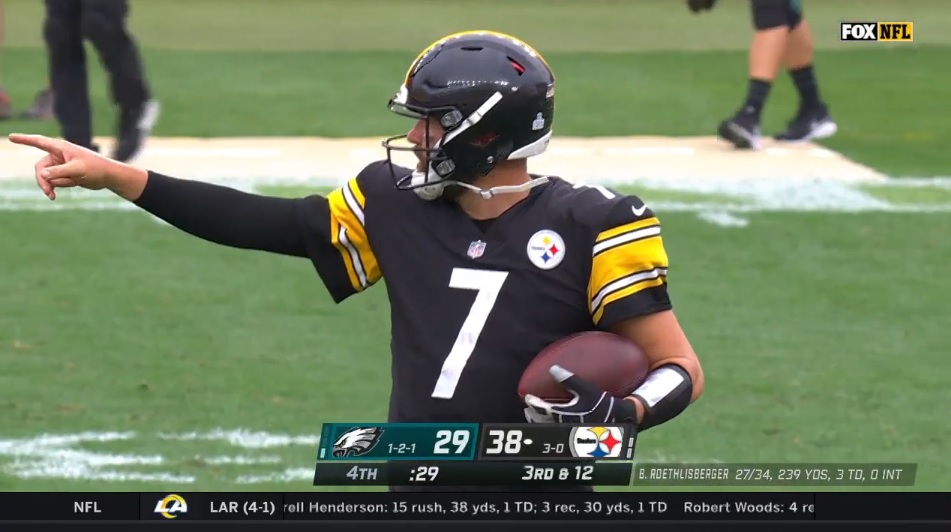 1. Spread Offense – The offense is still evolving and it was good to see them end the thirty point drought. The early drives showed the diversity they are promoting and also how just about everyone is involved in the offense. On the first eight offensive plays there were seven Steelers other than Ben Roethlisberger that touched the ball. An interesting aspect to that are the first three players to touch the ball (Ray Ray McCloud, Anthony McFarland, and Eric Ebron) were not Steelers last year. This group seems very team oriented and don’t make a stink, at least publicly, about a lack of touches.

2. Plenty of Pie to Go Around – To follow up on point number one if you’re an offensive player you better be ready when you get your chance. Six different players rushed the ball. Eight different players caught passes. Trey Edmunds and Jaylen Samuels also made their way on the field. And it’s not limited to the guys touching the ball.  If my eyes were correct there were eight different offensive linemen to get on the field. Stay loose and stay close because your number could be called at any time.

3. Chase Banking in on Opportunities – Chase Claypool was aided with more playing time when Diontae Johnson was injured (again) and he did capitalize. He had eleven targets. That is two less that the combined thirteen of the other four wide receivers. He won inside, he won outside, he won short, he won deep and he ran for a touchdown.  It really looks like he has been working on his release to help him separate and it is showing.  If this game is any indication of what is ahead the other WR’s may be looking at competing for the number 2 spot.

4. Embarrassing Coverage – If the goal was to stop Zach Ertz in the passing game, they succeeded. However, allowing the vaunted group of Travis Fulgham, J.J. Arcega-Whiteside, Greg Ward and John Hightower to have 17 receptions on 25 targets for 233 yards and 2 touchdowns is awful. And Hightower would have had another touchdown if the ball weren’t overthrown.  The DB’s allowed completions regardless of coverage and Fulgham’s 10 receptions and 152 yards came in 3 quarters as he wasn’t targeted in the first.  I know they aren’t good in Zone coverage but they need to really start to pick it up.

5. Third Freakin’ Down – In reality neither team played well on third down with the Eagles allowing 10 of 14 to be converted. This goes along with the previous point but allowing 11 of 15 third downs to become first downs is troublesome. Again this week they allowed several long conversions. Other than on big run the run defense was on point again so it’s not hard to see where the issue is. This defense is too talented to play like this.

6. I Believe What Vance Says – Last Thursday Vance McDonald said that he would rather block than catch passes and I think he made it a point to prove that this week. He did have one reception but what he was doing as a blocker really stood out.  He had a key block on McCloud’s big run.  He was out in front of Claypool on touchdown number three.  He made several slide blocks to kick out defenders for James Conner and had a nice hinge block for Benny Snell’s 8 yard run inside of two minutes.  He is a key factor in the Steeler running game.

7. Je Te Vois Pierre – That translates to “I see you Pierre”. If you’ve been following along with the Rookie Report each week you’ll know the James Pierre was showing steady improvement on special teams and this week may have been his best performance so far. He had a tackle on a punt in the third quarter and nearly had one on a kick off as well.  His blocking on punt return has gotten much better and if Johnson or McCloud end up taking one back his blocking of the gunner will be paramount.

8. Stephon His Way to Big Things – Stephon Tuitt was a disruptive force on Sunday versus the run and passes and after a slow start is starting to step it up and it shows in his production. He had 1.5 sacks giving him 3.5 through four games.  In the first two games he had 2 tackles and has 9 in the last two.  For the third consecutive game he had 3 quarterback hits. He was on pace for career numbers last year before his injury and is on pace for big numbers again.

9. Welcome Back, Steeler Faithful – It was so good to see some fans back in the stands. This has been a trying year for so many and as a nation we are not out of the woods yet but to see a few thousand people get to form fan gear donning groups among the yellow seats was encouraging.  I am sure the players appreciate having fans back and I will live vicariously through those lucky to attend.

10. First Quarter Synopsis – Based on the team’s record we couldn’t be happier. Undefeated and alone in first place is a bit surprising. Some positives include the return of Ben with just over 1,000 yards passing, 10 touchdowns and one pick. He has looked healthy with no ill effects after the surgery.  The play of rookies has been above par on the average.  Contributions from five of them so far with lots of positives. Improvement in the diversity of the offense adding motion and getting everyone involved is evolving from week to week.  The pass rush has been superb and the run defense has been impressive.  The negatives include pass coverage on all levels, the injury bug biting at David DeCastro and not holding on to leads but at least they are winning the games they should. More positives than negatives are what we want to continue to see. Let’s see what the next four weeks bring us.