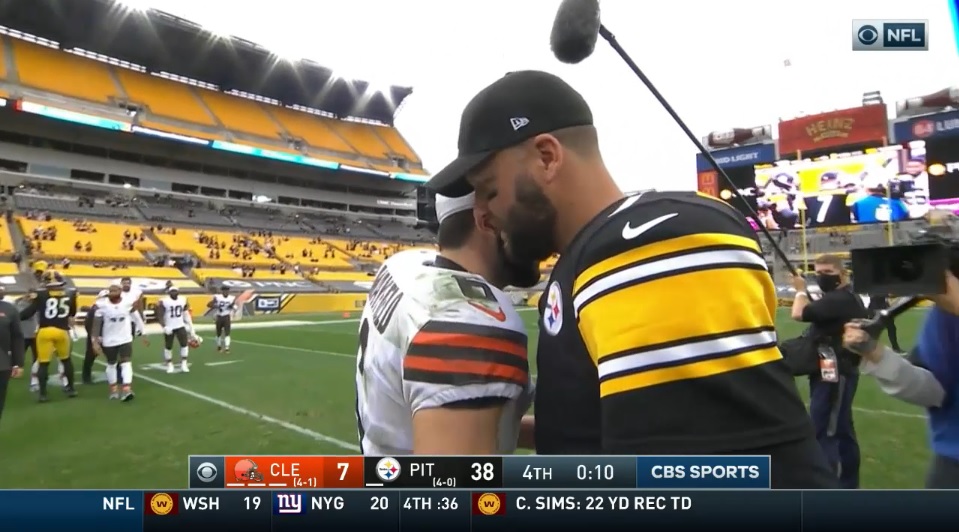 1. “Come Together” – The Beatles – For this undefeated team, so far this year there have been good things and bad things. Things to praise and things that need work. I honestly didn’t know what to expect from them coming into this divisional battle. This game however everything came together.  This was the most complete football game the Steelers have played in a long time.  I’m sure I could find something to nitpick about and may later in this list but overall an outstanding performance on offense, defense and special teams.

2. “Hold the Line” – Toto – What a difference a week makes. After last week’s awful performance on third down the defense stepped it up in a big way this week. They held the Browns, whose offense was clicking coming into this game, to one third down conversion on twelve attempts and zero for three on fourth down.  Name a player and he was a part of making those stops lead by the trio of Cameron Heyward, Stephon Tuitt and Tyson Alualu up front. Incredible performance by the whole defense.

3. “Pressure” – Billy Joel – I don’t know what Baker Mayfield was thinking about but this was the song that was going through my head when he was dropping back. That frenetic beat matched up well with the frenetic pace of the pass rush. The defense recorded four more sacks and seven quarterback hits.  And give Mayfield credit for avoiding the pressure or the sack number would have been higher and showing a lot of toughness taking some big hits back there. Keith Butler has been dialing the right numbers all season.

4. “Country Strong” – Gwyneth Paltrow – In such an unusual off season many players had to alternate ways to work out and James Washington did his work on his farm. Whatever he was doing out there looks to have contributed (maybe) in his hand strength. In his earlier years it looked like he would fight the ball at times in the air but not anymore.  He has great confidence in his hands and everything looks to be clean and smooth. No bobble, no movement, the ball just sticks. Good to see him get involved in the action today.

5. “Wrap It Up” – The Fabulous Thunderbirds – How many fewer tackles do you think would be missed if defenders used their arms instead of just hitting a player with their shoulder? I think this is the result of the ESPN highlight culture. Big hits make the highlights, form tackles do not. I want to see a stat of how many yards are gained after a player misses a tackle with a shoulder bump.  These NFL guys are too big and strong to not use everything you have to bring down a ball carrier.

6. “Here Comes the Boom” – Nelly – We’re all hoping the injury to Devin Bush isn’t serious but those noncontact injuries usually don’t end up well. Let’s give credit to Robert Spillane being the next man up. He was not tentative at all flying to the ball and making several tackles with authority. Despite not starting the game he finished with six tackles and one tackle for a loss. If Bush is out going forward, Spillane will have some big shoes to fill but he showed he was willing and should be ready going forward.

7. “Runnin’ Down a Dream” – Tom Petty and The Heartbreakers – Through five games the Steelers running game has been a positive. The offense has had no less than 109 yards rushing in any game.  They have had four one hundred yard rushers including three for James Conner.  Against Cleveland he showed elusiveness in the backfield to make defenders miss, the ability to set up defenders no the edge with quick cuts and straight power to lower his shoulder and get some extra yards. The offensive line is doing a nice job controlling the line of scrimmage and giving runners a chance.

8. “Centerfield” – John Fogerty – The line in the song says, “Put me in coach, I’m ready to play today”. I’ve already talked about Spillane but there were a lot of players who for whatever reason got some reps today. On offense you had J.C.Hassenauer (he got two snaps late last week), Mason Rudolph, Deon Cain and Derwin Gray all got essentially their first snaps of the year. Anthony McFarland and Ray-Ray McCloud got some extra snaps with the big lead. And I have to check the tape but I thought I might have seen Justin Layne get a snap when Mike Hilton went down for a play. Don’t underestimate the value these snap can have over the course of the season. More blowout wins would be nice to make this possible.

9. “Bodies” – Drowning Pool – I’ve talked about the offense and the defense and now some love for special teams. Bodies were hitting the floor as there were some big hits a very good coverage throughout the game.  Alex Highsmith had two big hits and three tackles. Jordan Dangerfield was also a big part getting in on two tackles. Chase Claypool, Spillane, James Pierre and Benny Snell were more of the youth movement making stop on special teams. In the off season there are those that argue “he’s nothing but a special team’s player”. Good teams need those guys.

10. “Wheels of Confusion” – Black Sabbath – I’ve commented on the defensive backfield when they’re bad so I have to give them props when they are good. They had the wheels turning inside Mayfield’s head and had him confused for three quarters.  Minkah Fitzpatrick finally made a splash play (predicted by our Dave Bryan) to get things started. Cam Sutton made the other interception on a poor decision. Terrell Edmunds close on the ball to break up a pass and Joe Haden led the way with three breakups.  So we’ve seen the bad and we’ve seen the good. They are likely somewhere in between and hopefully will lean to the good side the rest of the way.