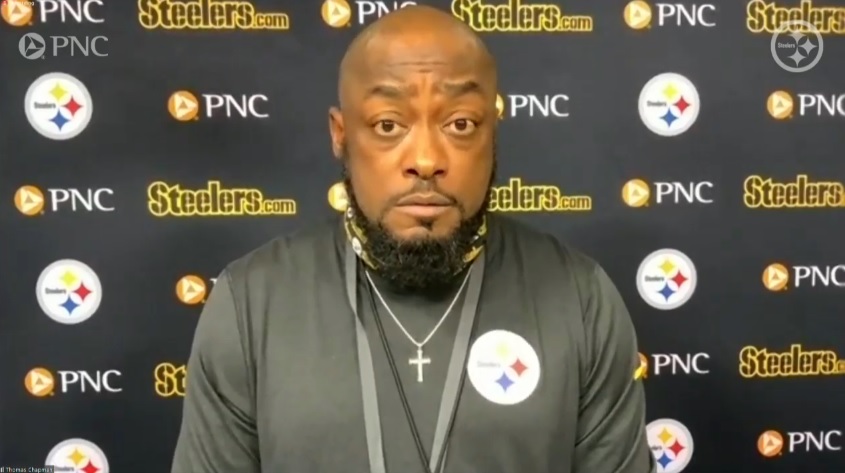 Just how comfortable are the Pittsburgh Steelers at the inside linebacker position on the heels of starter Devin bush suffering a season-ending ACL tear in Sunday’s win over the Cleveland Browns? Comfortable enough that it doesn’t sound like the team will make any free agent 53-man roster acquisitions or trades this week.

In summation, head coach Mike Tomlin indicated on Tuesday during his weekly press conference that for the team’s Week 7 game against the Tennessee Titans that the inside linebacker position that Bush has been playing will mostly be manned by Robert Spillane, who took over for Bush after he was injured late in the first half against the Browns.

So, what about the possibility of the Steelers making a trade or free agent acquisition at the linebacker position past Sunday’s road game against the Titans? He was essentially asked that on Tuesday during his press conference.

“I can’t see past lunch, to be honest with you,” Tomlin said. “We’re just focused on doing what it is that we need to do to win this game. They’re going to be things that happen in this game that could change whatever potential plans we might have anyway. That happens every time you step in the stadium. We’re singularly, professionally focused on the Tennessee Titans, the mix of guys that we have to meet this week’s challenge, and when that’s done, we’ll move forward.”

In short, barring another injury happening at the inside linebacker position or Spillane and others laying huge eggs with their play these next few weeks, don’t count on the Steelers making any significant moves. Obviously, injuries are very unpredictable so that could of course change the Steelers thinking.

On Tuesday, Jeremy Fowler of espn.com suggested on Twitter that the Steelers might investigate trading for veteran inside linebackers Avery Williamson of the New York Jets or Denzel Perryman of the Los Angeles Chargers. Its important to point out, however, that that’s mere speculation by Fowler. It’s also important to point out that this year’s trade deadline is November 3, which is now exactly two weeks away.

Steelers could evaluate trade market after Devin Bush injury. Jets might look to unload contracts and Avery Williamson ($4.75M cap hit) goes off books in 2021. Same with Chargers' Denzel Perryman, who isn't getting significant snaps and would likely welcome a fresh start.