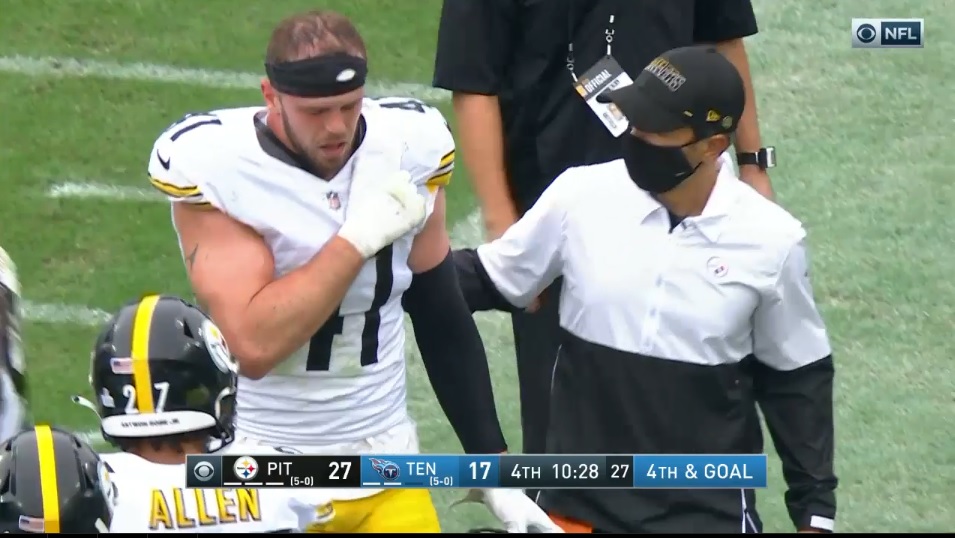 Mike Tomlin calls it “residue.” Robert Spillane probably calls it “my shoulder really, really hurts.” But that’s life in the NFL and life when you collide with a 250 pound back like Derrick Henry, as Spillane did on a goal line stop in the second half of Sunday’s win over the Titans. That moment is emblematic of who Spillane is as a player, an old-school, thumping linebacker and Tomlin was happy with his performance.

“I thought he played well,” he told reporters during his Tuesday press conference. “His shoulder is fine. I’m sure there’s some residue if you will, but I don’t think it will limit his participation or preparation in any way as we prepare for Baltimore. And I think it’s reasonable to expect him to get better with each outing. Because he is a hard working young man and with physical reps and muscle memory should come more consistent performance. And so those are all encouraging and exciting things to discuss.”

Spillane finished his first career start with three tackles, two solo, though none were bigger than his stick on Henry along the goal line. Unfortunately, the Titans still found the end zone two plays later but it was a grown man moment for a player stepping into big shoes, filling in for Devin Bush.

Spillane was part of a Steelers’ run defense that minimized Derrick Henry to one of his least productive games of the season, averaging well under four yards per carry. A far cry from what he did to the Houston Texans the week prior, rumbling for over 200 yards, including a 94 yard race to the end zone. His style of play reminds me of Larry Foote. Guys who weren’t the biggest or fastest but intense as hell and willing to sacrifice their body to make the play.

He played about 75% of the defensive snaps, logging work in the team’s base and nickel defense. He was removed in dime packages for the more athletic Ulysees Gilbert III, who also replaced Spillane in the two snaps he missed after his shoulder bruise. That’s likely to be how the division of labor will go the rest of the season, barring injury or terrible performance. Spillane and company will be tested again this Sunday against the Ravens more wide-open attack.