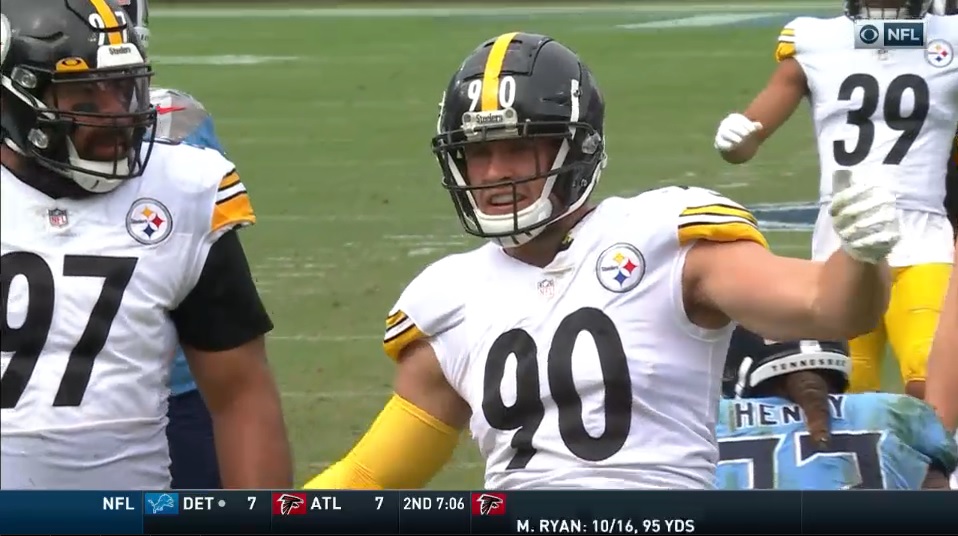 No one – and I mean no one – has been as active in opposing backfields as TJ Watt and Vince Williams. The pair of Steelers’ linebackers are tied for the league lead with 12 tackles for loss this season. No one else in the league comes close. Here’s the top four in football.

Keep in mind Williams and Watt have done it in only six games. Graham, Smith and almost everyone else with seven tackles for loss did it in seven games. So let’s look at this list a little differently. Here are the top five players in TFL, ones who have played no more than six games.

An even larger difference between Williams, Watt, and everyone else. It shows the level of dominance both men are experiencing and the ability to play to their strengths in the Steelers aggressive, downhill scheme.

Williams has had at least one tackle for loss in every single game this season. He had six in the first two weeks alone and last week against the Titans, he picked up two more. Here’s his non-sack TFL, tackling Derrick Henry for a two yard loss on a screen.

Watt has also had at least one TFL in every game. He’s turned it on lately with seven over his last three games, including a trio of them in the win over Tennessee. Here’s Watt’s two non-sack TFLs.

Those two players come from two different paths. Williams was a 6th round pick, billed as a two-down player and below average athlete coming out of Florida State. Watt was a budding star in Wisconsin and first round pick, labeled an excellent athlete from a top football family. But as the Steelers say, they don’t care how you got here. And the common thread between these two guys, Williams and Watt, is their work ethic. Both guys have incredibly high football IQs and watch a ton of film. They read and diagnose as quickly as anyone and it gives them a jump to fly into the backfield. For Watt, it means timing and jumping the snap before the tackle can get out of his stance. For Williams, it’s shooting the gap before the center or guard can get off his block.

Both players will have the chance to make (relatively recent) Steelers’ history this season. Pro Football Reference has been tracking TFL stats since 1999. Here are the team’s top five leaders since then.

First of all. Wow Kendrell Bell was really good and I’m extra bummed injuries cut his promising career so short. Second, Williams and Watt are more than halfway to the team record with more than half the season to play. They’re already four off from getting into the top five. Given their talent, the overall skill of this defense, and Keith Butler’s foot-on-the-floor mentality, there’s a good chance one – or both – guys break Bell’s mark.