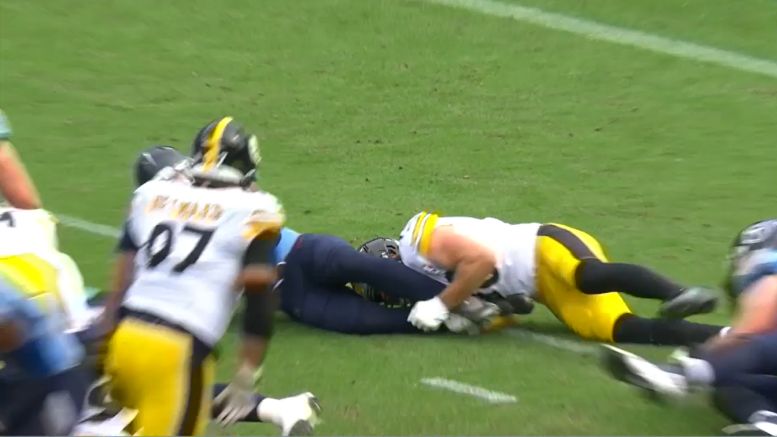 When you hold a running back who is averaging 117 yards per game and 4.8 yards per carry, with six rushing touchdowns in five games, you’re going to feel good coming out of a winning contest in which you limit him to 75 yards at 3.8 yards per rush—even if he did manage to get into the end zone, and only after a third-down stuff, made by a linebacker making his first start.

That is what the Pittsburgh Steelers managed against the Tennessee Titans’ Derrick Henry, who entered today’s game leading the NFL with 588 rushing yards, after totaling 1540 rushing yards last season. His 75 yards were the second-least total of the season so far, with the Bills holding him to 57, but he also scored twice in that game in a blowout win.

Henry was coming fresh off of a 212-yard effort with another two touchdowns in an overtime win, including a 94-yard touchdown run, when he ran into the Steelers’ defense, which has been among the very best against the run this season.

And Pittsburgh wanted to have done a lot better. “There was too much splash. We have goals so high for ourselves because we know what we can do when we feel like we can be a truly special defense”, T.J. Watt said after the game, via transcript.

“And that’s why no one’s really satisfied after today”, he went on. “We need to do a lot better job, especially in the second half. But it starts with the run. And even though we did a good job in the first half, we got to continue and roll it over into the second half”.

The Steelers allowed 17 unanswered points in the second half, allowing the Titans to close to within three points. Tennessee missed a 45-yard field goal that would have tied the game with under 20 seconds to play, all but assuring an overtime adventure, and on the eve of playing the Baltimore Ravens, coming fresh out of a bye week.

As you might recall, this was supposed to be Ravens week. Because of the Titans’ outbreak, the Ravens had third week eight bye moved to week seven, and their game against the Steelers moved from week seven to week eight. Things certainly broke well for them.

Pittsburgh still has plenty of problems for a 6-0 team. But as long as they find ways to keep winning while resolving their issues, that is all that anybody could ask for. Their run defense did enough against arguably the toughest back in the league, and after Baltimore, their schedule gets considerably lighter.