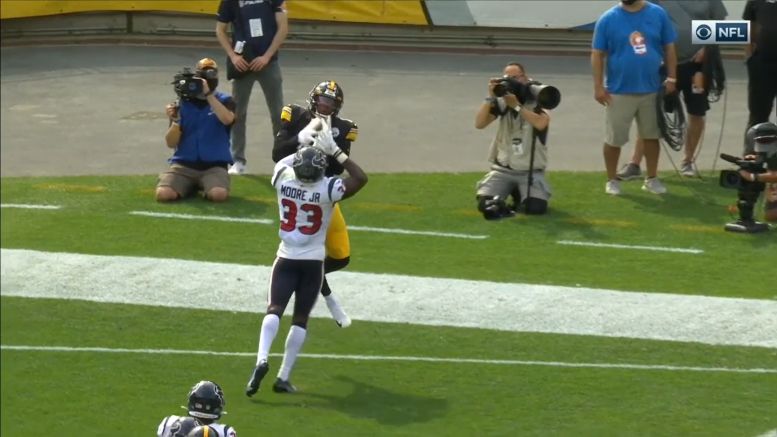 The Pittsburgh Steelers entered the eve of the new league year substantially above the salary cap. It took some heavy maneuvering, from releases, restructures, and even a retirement, seemingly just to get compliant. But in spite of that, they still managed to sign three players in free agency, all of whom have contributed so far this season.

The biggest signing, of course, was that of veteran Pro Bowl tight end Eric Ebron, who came in on a two-year, $12 million contract. We got our best glimpse yet of what he could deliver for this offense in the team’s last game with his five-catch, 52-yard performance, which was highlighted by an impressive touchdown grab in the back right corner of the end zone.

During training camp, the defensive players, particularly the defensive backs but also the linebackers who had to cover him sometimes, were consistently raving about Ebron and how difficult he was to cover.

This has transferred some to games. He does have nine catches so far for 113 yards, and we’ve seen him running away from defenders and making significant catches, for example, on third down. And I think players like Steven Nelson are just grateful that the regular season is here, since it means they don’t have to work against him so directly.

“Ebron, he’s on the starting offense, so we don’t get to see him that much during the week”, he told reporters yesterday when he was asked how Ebron helps prepare them for other athletic tight ends they might face. “But the scout team guys are doing a great job week in and week out of presenting that role. Ebron is a great player in what he does”.

The Steelers have faced some talented tight ends already so far this year, such as Evan Engram with the New York Giants, although he struggled, and Noah Fant, who caught four passes for 57 yards and a score, plus a two-point conversion.

This week, they will have to deal with one of the best in the business, Zach Ertz of the Philadelphia Eagles. Although the Eagles are a rough-looking team so far this year, Ertz already has 19 receptions on the season, and they use all their tight ends. Dallas Goedert has 13, for example, for 138 yards. Richard Rodgers is another tight end, with five receptions.

In other words, the tight end position is going to be a factor in this game. Both sides of the ball have a pair of starting tight ends that they like to use in the passing game. The Steelers were just getting things in line for their own tight ends against Houston when the pandemic got in their way and forced them into a premature bye week.