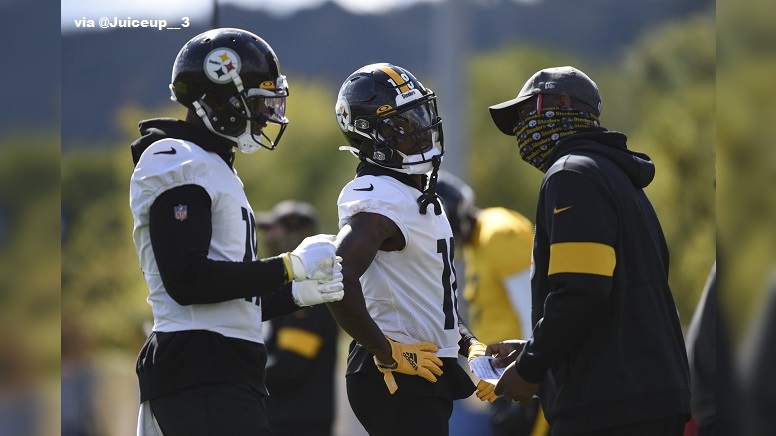 Thursday wasn’t all bad news when it comes to the Pittsburgh Steelers. Sure, the teams Week 4 game against the Tennessee titans was postponed early Thursday morning but that didn’t stop the team practicing after the news had broken. Within that Thursday practice comes the good news that wide receiver Diontae Johnson was able to participate in some sort of capacity.

According to pictures posted on the Steelers official website following the team’s Thursday practice Johnson, who began the week in concussion protocol after leaving Sunday’s game against the Houston Texans in the first half after getting knocked woozy on an end-around play, was wearing a helmet during the team’s session. Johnson also posted a picture of himself in helmet and jersey on his Twitter account after practice was over with.

Diontae Johnson (concussion) with a helmet on during the team's Thursday practice per epesphotography #Steelers pic.twitter.com/E48PpexxLJ

The fact that Johnson is already back participating in practice in some form is a great sign that he’ll be able to play in the Steelers Week 5 home game against the Philadelphia Eagles. in fact, it will be surprising if he doesn’t.

As for how the Week 4 bye will impact the Steelers two other players currently dealing with injuries, fullback Derek Watt (hamstring) and inside linebacker Marcus Allen (plantar fasciitis), it’s hard to speculate as Thursday winds down. That said, a post Thursday practice picture on the Steelers official website clearly shows that Allen, who played 14 special teams snaps against the Texans this past Sunday, didn’t participate in the session.

As for watt, who left Sunday’s game in the first half with a hamstring injury, I have failed to find any pictures of him from Thursday’s practice. In all likelihood, Watt was inside the Steelers facility getting treatment on his injured hamstring while the rest of the team practiced on Thursday.

The Steelers first injury report of Week 5 won’t be released until next Wednesday’s practice is over with. In the meantime, we’ll need to wait and see if Tomlin offers up any news on the conditions of Watt and Allen during his Tuesday press conference.