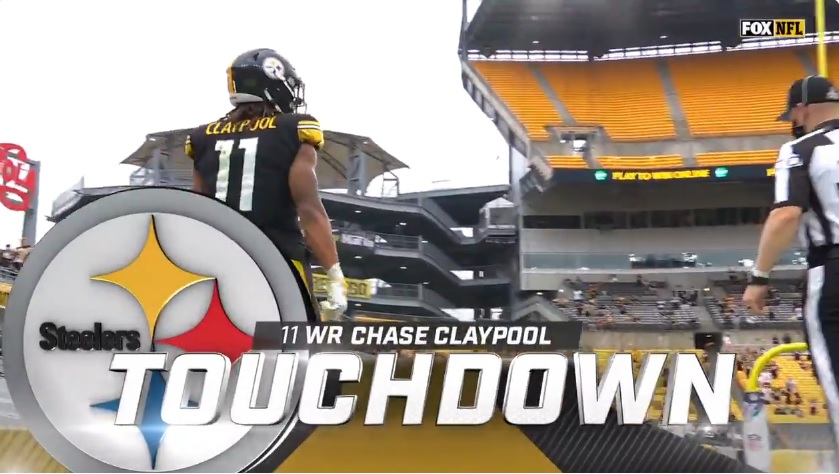 Your winners and losers from the Pittsburgh Steelers Week 5, 38-29 win against the Philadelphia Eagles.

Chase Claypool – Claypool was a one man wrecking crew Sunday. He found the end zone four times, three receptions, one rush, and was Ben Roethlisberger’s go-to target on third down. He again saw his snap count expand following Diontae Johnson’s injury but even when Johnson returns, Claypool has cemented a major role in this offense. Breakout game for the rook. And that’s an obvious understatement as you’re ever going to see.

Ben Roethlisberger – Of course, someone has to feed Claypool those TDs too. Roethlisberger was crisp, efficient, and probably out of his comfort zone with all the motion added to the offense. Not exactly been part of the team’s wheelhouse the last decade. He finished the day 27/34, 239 yards, with three touchdowns and no interceptions.

Matt Canada – If there was any question before, Canada has a major influence on this offense. Pittsburgh’s scheme was unlike anything we’ve seen from this team before. Extremely college-like with a wide range of motions, shifts, and misdirection that worked more often than not. They pulled plays out of Kyle Shanahan’s playbook, like Ray-Ray McCloud’s long 58 yard run.

Stephon Tuitt – Another strong performance. Finishes the day with four tackles and a sack. If Jonathan Vilma is to be believed on the FOX broadcast, his 4th quarter sack saved a go-ahead Eagles’ touchdown. We’ll have to check the All-22.

Third Down Offense – The Steelers’ third down offense was as equally good as the third down defense was bad. 10/14 on offense, impressively stringing together drives and controlling the clock for most of the game. Goal was to get into 3rd and manageable and hit receivers with short crosses to negate the Eagles’ pass rush.

Steelers’ Secondary – Bad. Everyone. Joe Haden. Steven Nelson. Mike Hilton. Little-known Travis Fulgham carved up Pittsburgh, sometimes left uncovered, but even when he was, completely Moss’d those guys. Credit to Haden for a 3rd down breakup late in the game but too often, the secondary wasn’t competitive at the catch point, only helplessly tackling after the pass was hauled in. Minkah Fitzpatrick missed more tackles than usual, there was miscommunication within this unit, and aside from two easy picks by Nelson (one miscommunication/bump, one 4th and 20 prayer), there wasn’t enough splash.

Third Down Defense – About as bad as it gets. It’s not even just the percentage of conversions they allowed, though that was an unacceptable number. It was the third-and-forevers given up. 3rd and 17. 3rd and 10. 3rd and 8. Frustrating to no end. Some of that was with the Steelers playing zone, which isn’t the defense’s strength, but things weren’t a whole lot better when they called man either. Eagles finished the day 10/14 on third down.

Tackling – If the Steelers tackle this game, it’s not close. Mike Hilton missed a tackle on Miles Sanders’ 3rd and 9, 75 yard escape to the end zone. Bud Dupree missed a sack on Carson Wentz that led to an Eagles’ third down conversion (plus Vince Williams’ roughing the passer) which led to another Philadelphia score. That’s Steelers beating Steelers. The tackling overall wasn’t terrible today but when they missed, it proved costly.