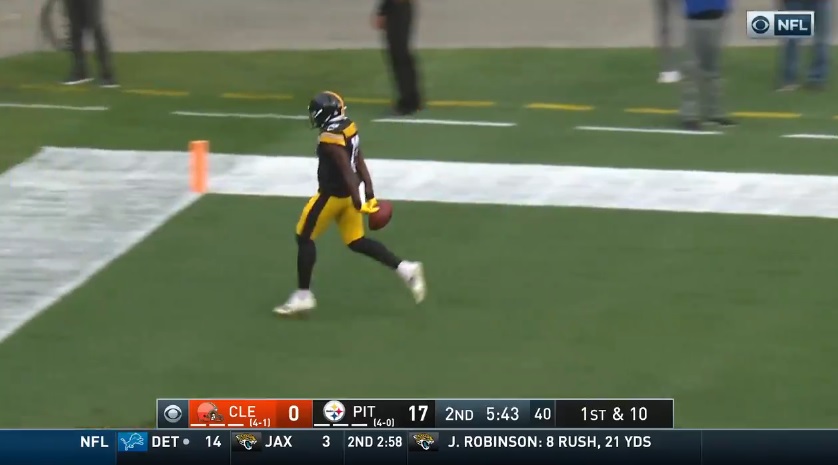 Lots of winners from Pittsburgh’s 38-7 blowout win against the Cleveland Browns.

Run Defense: Big hat tip to the whole defense. Cleveland came in with the game’s top rushing attack and Pittsburgh shut them down. Bottled up Kareem Hunt, didn’t let Baker Mayfield make plays with his legs, and stuffed Cleveland on 3rd and 4th and short. That’s a team defense thing but kudos to the d-line for being stout, overwhelming a Browns’ line missing guard Wyatt Teller, with guys like TJ Watt, Vince Williams, and Mike Hilton run blitzing on their way to the quarterback. Absolutely dominated at the line of scrimmage. Especially Cam Heyward, who bullied the Browns’ interior.

Stephon Tuitt: On a defense that has a stupid amount of talent, Tuitt might be the top defender. Neck and neck with Watt. He was one of the main guys repeatedly winning the line of scrimmage. Cleveland couldn’t run a draw because of this guy. Tuitt also chipped in a half-sack that probably would’ve been full had he not been held.

Bud Dupree: Dupree got in the backfield as much as anyone today, finishing Sunday with a team-high two sacks. He plays the run hard and with great physicality, a key edge setter to spill help to that ox-strong Steelers’ interior. His sack two plays out of the second half helped seal this game.

Robert Spillane: Kudos to Spillane for coming in cold after Devin Bush’s potentially serious knee injury. Spillane wasn’t spectacular but as advertised. Physical who can definitely stick you and he had the green dot on his helmet, taking over communication duties.

Minkah Fitzpatrick: Search for splash plays no longer, Steelers’ Nation. Fitzpatrick got the party started with a pick-six of Baker Mayfield on the first drive, robbing a slant and taking it to the house. That should quell any concerns about how well he was (or wasn’t) playing.

Alejandro Villanueva: Roethlisberger was sacked twice Sunday but both came on the right side. Neither fell on Villanueva’s shoulders. He didn’t face Myles Garrett all game, Garrett got a sack on a stunt splitting Chuks Okorafor and Kevin Dotson but when he faced Villanueva, not much happened.

James Conner: Conner’s best game of the year. He created behind the LOS, making defenders miss, with great feet and an effective spin move. He ran hard, punished the Browns, and took care of the football. Finished the day with 20 carries for 101 yards and a rushing score.

James Washington: Washington broke free on a double-move for a walk-in 28 yard score. Also had a key catch on third down, snatching it over the CBs shoulder, on the first drive that setup a field goal. Just a solid game from Washington today with some splash mixed in.

Anthony McFarland: Not many losers when you win by the margin Pittsburgh did today. These are far from serious offenders. McFarland did have a miscommunication on a called draw that forced Ben Roethlisberger to scramble for four yards. McFarland was taken off the field the next play. He got involved on the final drive of the game but he’s going to have to be more attentive to earn the coaches trust.

JuJu Smith-Schuster: Again, not painting with the harshest criticism here. But Smith-Schuster has been quiet on the stat sheet for a couple weeks now. Steelers have a ton of weapons to spread the love to but JuJu hasn’t been one of those guys. Two catches for six yards today as Claypool and Washington made the passing game’s biggest plays. McFarland had as many receiving yards as Smith-Schuster did today.