The Pittsburgh Steelers have now released their second official injury report of Week 8 ahead of their Sunday road game against the Baltimore Ravens and the Thursday offering shows that several players are moving in the right direction with two others going the wrong way.

After sitting out on Wednesday, Steelers cornerback Mike Hilton (shoulder) is listed as being a limited practice participant on Thursday on the injury report. Hilton missed the Steelers Week 7 game with a shoulder injury so Friday figures to be big day for him when it comes to determining if he might play Sunday against the ravens.

Fullback Derek Watt (hamstring) was limited on Thursday after being listed as a full participant on the team’s Wednesday injury report so he’s moving in the wrong direction midweek. Watt, like Hilton, missed the Steelers Week 7 game due to injury.

Not practicing on Thursday for the Steelers were safety Jordan Dangerfield (quadricep) and defensive end Chris Wormley (knee). Both also sat out Wednesday, so they are looking real questionable to play on Sunday right now.

Steelers inside linebacker Ulysees Gilbert III was added to the team’s injury report on Thursday after failing to practice because of a back injury. It will now be interesting to see if he can practice on Friday. 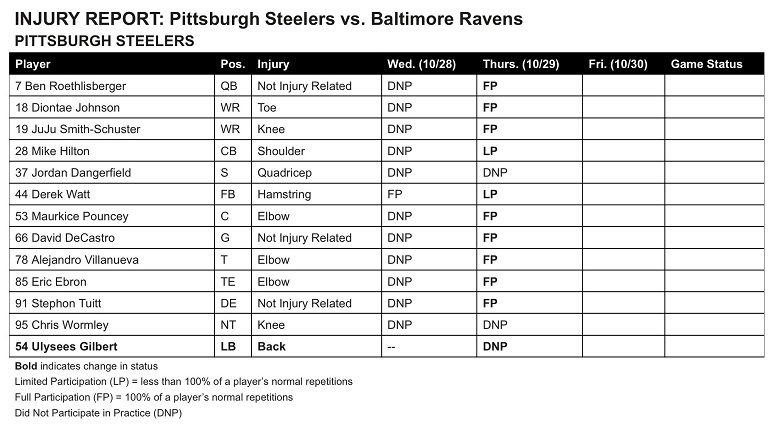