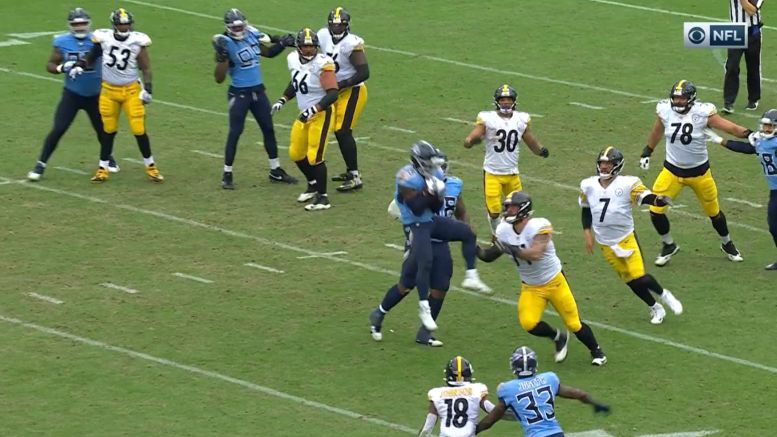 Ben Roethlisberger entered the Tennessee Titans game playing the most secure football of his career. He had thrown just one interception in the first five weeks on 165 pass attempts, and only a couple other passes were ever even in harm’s way.

The Titans had other ideas of the Pittsburgh Steelers’ 17-year veteran quarterback, as they were consistently getting into Roethlisberger’s throwing lanes throughout the game, getting a hand on the ball several times. He had already thrown a meaningless interception at the end of the first half, but Tennessee got a second and more significant interception late in the third.

Just after recording a third-down conversion, Roethlisberger had another pass batted, this time up in the air, and it was intercepted by Jayon Brown. That put the Titans just inside of field goal range, which they eventually had to settle for, which at the time cut the Steelers’ lead to 27-17.

He nearly threw another interception on third and 10 on the subsequent possession, throwing the ball to Smith-Schuster, but into the back of the defender. Again, the ball bounced up into the air, but mercifully fell incomplete.

The Titans entered the game with a league-leading plus-six turnover differential, taking the ball away nine times in five games with only three giveaways. The Steelers were nearly identical with nine takeaways and just four giveaways. They had only one giveaway in their last three entering the game.

Thanks to Roethlisberger, you can add three more to the season total, up to seven, as he quadrupled his interception total on the season, including some bad decisions. The most egregious was the last one, firing into double or triple coverage in the end zone on third and 12 within field goal range in a three-point game.

He attempted 49 passes on the day, completing 32 for 268 yards, averaging a mere 5.5 yards per attempt. He did have the two touchdowns, butt three interceptions is going to lose you the vast majority of games, especially when you defense doesn’t give any back to you.

Mike Tomlin said last night that the turnover battle would be critical in today’s game. Even though the team with the minus-three differential won, it still was, because those turnovers made what might otherwise have been a blowout a close game that came down to a missed field goal in the final 20 seconds.

I don’t know exactly why Roethlisberger struggled particularly today with ball security, including failing to read passing lanes, but it’s something that needs to be cleaned up in a hurry as he prepares to face the league’s leading defense in points allowed, who just added another quality pass rusher.