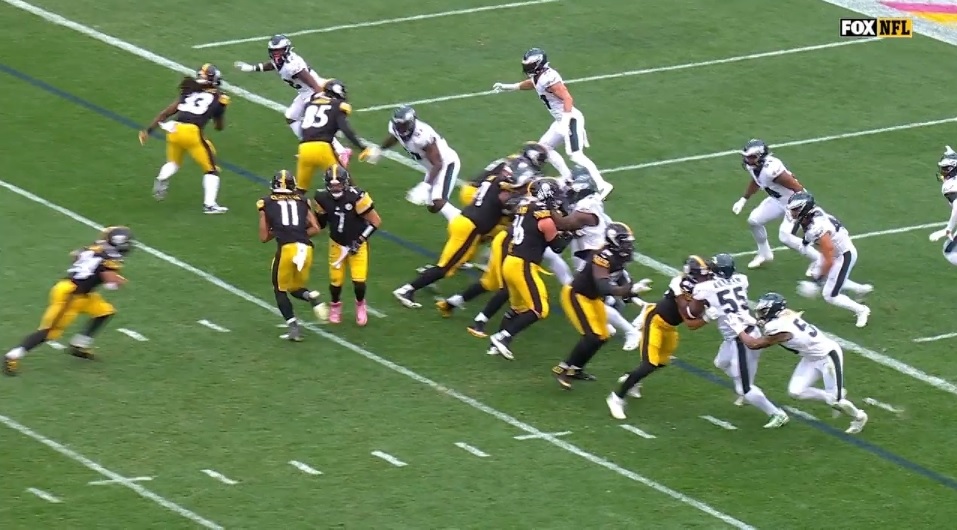 The Pittsburgh Steelers’ offense put up its most points since Week 10 of 2018. And though Ben Roethlisberger stuffed the stat sheet with three touchdowns, the plan of attacked looked much different than what fans are used to seeing. Undoubtedly influenced by new QBs coach Matt Canada, the Steelers used more motion, sweeps, and receivers in the run game than ever before. And though there were ebbs and flows, there were big payoffs. Chase Claypool found the end zone on a sweep with Ray-Ray McCloud racing down the right side for a 58 yard gain.

After the win, Mike Tomlin talked about the decision to add a new look to the offense.

“We’re just trying to move the ball around and make everybody defend the entire field, both vertically and horizontally,” Tomlin said speaking to reporters. “And that’s just a component of our attack. We brought it to the stage today and that’s why we thrive to be diverse. To keep people off balance. To be able to go to personalities and utilize those personalities and effort to win football games.”

Claypool finished the day with three carries for six yards and a touchdown. McCloud had two for 63. All without Diontae Johnson, whose ability to make people miss is an asset for these types of situation. But like their offensive identify, they adapted with personnel, and kept the Eagles’ off-balanced.

What fans saw Sunday looked much closer to something you’d see from Kyle Shanahan and the 49ers. In fact, McCloud’s 58 yard run was the exact same concept as something the 49ers have run. We’ll be breaking that down in the morning.

Pittsburgh’s use of motion will vary throughout the season. It’s certainly on tape now. It succeeded today where it hadn’t in past weeks because of their willingness to get the motion player directly involved in the play. Giving them the ball as opposed to using them solely as window dressing for defenses to not take seriously. Now the Steelers can build off that and continue to keep defenses off-balanced, ahead in the cat/mouse game the best offenses in football are able to do.