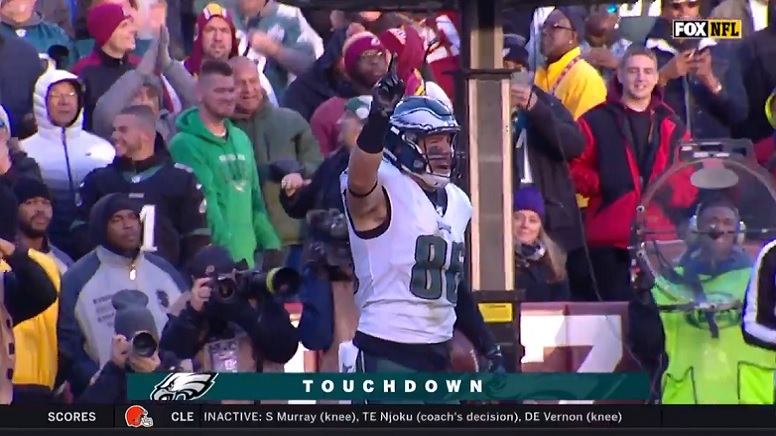 While the Philadelphia Eagles might not have several of their top wide receivers for their Sunday road game against the Pittsburgh Steelers, they will have tight end Zach Ertz, who currently leads the team in receptions with 19 for 139 yards and a touchdown. Steelers head coach Mike Tomlin made it known on Tuesday that Ertz will surely have the attention of the team’s defense on Sunday at Heinz Field

“[Zach] Ertz at tight end creates major, major issues,” Tomlin said of the Eagles top tight end. “He’s a matchup problem. He’s often too big and strong for defensive backs. He’s too fast and agile for linebackers. We have to be thoughtful about the people we employ to match him up against, particularly in situational ball, possession downs, red zone. This guy’s significant just about in all circumstances. It’s reasonable to expect him to be significant in the heavy moments. He has been for those guys not only in 2020, but over a large number of years. We have a lot of respect for him.”

Of Ertz’s 19 receptions this season, four of them have come on third downs and three gained the desired result. The Eagles obviously move him around in their formations and as Tomlin indicated, he presents a matchup problem when matched up against linebackers or safeties and even undersized cornerbacks.

In their first three games of 2020, the Steelers have faced a few very athletic tight ends in Evan Engram and Noah Fant. In total, the Steelers defense has allowed opposing tight ends to catch 11 passes for 124 yards and a touchdown. Fant registered four of those 11 receptions for 57 of the 124 yards and the lone touchdown. Two of his four receptions were explosive plays of 20 yards or longer and both came with Steelers linebacker Devin Bush covering him.

With the Steelers already facing two quality tight ends so far this season in Engram and Fant, Tomlin was asked on Tuesday if that somewhat helps his defense formulate somewhat of a plan on how to defend Ertz on Sunday art Heinz Field

“You know, as you mentioned, they’re very different guys and not only are they different guys, but their different guys within the responsibilities of the offense that they play in, Tomlin said. “And I think it’s probably even more so of an issue in Philadelphia because of the lack of availability of some of the core receivers that we’ve mentioned. So, you know, this is going to be a big challenge.”

This will mark the first time that the Steelers have played against Ertz as the Stanford product and former second-round draft pick missed the 2016 Week 3 game against Pittsburgh in Philadelphia with a rib injury. The Eagles didn’t miss Ertz any in that game, however, as quarterback Carson Wentz threw for 301 yards and two touchdowns in an easy 34-3 road win. In case you’re curious, Eagles tight ends combined to catch five passes for 80 yards in that game.

“We’re not looking for comparables, to be honest with you, we’re just going to have to formulate a quality plan to work to minimize Ertz’s impact on this football game,” Tomlin said of Ertz on Tuesday.