The Pittsburgh Steelers have now released what will likely be their final injury report of Week 8 ahead of the team’s Sunday road game against the Baltimore Ravens and the Friday offering shows that three players have now officially been ruled out for that contest with two more being questionable for it.

After not practicing again on Friday, safety Jordan Dangerfield (quadricep), inside linebacker Ulysees Gilbert III (back), and defensive end Chris Wormley (knee) have all been ruled out for the Steelers Sunday road game against the Ravens. Dangerfield and Gilbert are both big special teams contributors. Last week, Gilbert saw a few snaps on defense as a sub package linebacker.

With Wormley out for Sunday, both Henry Mondeaux and Isaiah Buggs are likely to get helmets against the Ravens and play backup roles.

Limited on Friday for the Steelers and ending the week listed as questionable are cornerback Mike Hilton (shoulder), fullback Derek Watt (hamstring). Both players missed the team’s Week 7 game with their injuries. The word Thursday night on Hilton is that he isn’t expected to play against the Ravens. 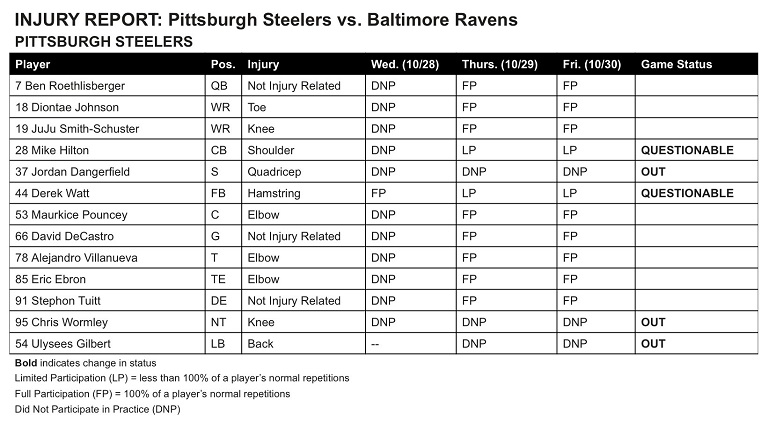