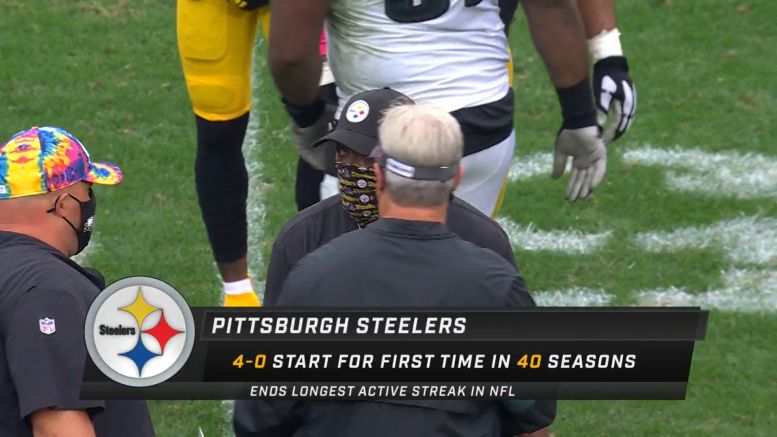 It hasn’t been perfect, and it certainly hasn’t always been pretty, but the Pittsburgh Steelers are 4-0. They are, in fact, one of the league’s few remaining unbeaten teams, after the Kansas City Chiefs lost today. And two undefeated teams will play later this week, with the Seattle Seahawks playing later tonight. The Green Bay Packers are on a bye.

So far, nobody has managed to go 5-0, though the Seahawks will have a chance against a bad Vikings team tonight, and the Buffalo Bills will be playing a 3-0 Tennessee Titans team. But the Steelers are now one of five teams this season that have managed to go 4-0 (with the Titans having a chance to join them).

This is more significant for the Steelers than for most, because it’s rare that they get off to such a fast start—and they are successful when they do. In fact, they haven’t gotten off to a 4-0 start since 1979—having also done it in 1978 and 1973. They won the Super Bowl twice in the three previous times that they got off to such a good start.

Their all-time record for the most wins to start a season was set in 1978 when they won their first seven games, ultimately finishing 14-2, which was the best record they ever had until the 2004 team went 15-1, winning their final 14 games.

It was 40 seasons between the 1979 season, the last time they started 4-0, and this 4-0 start, which marked the longest draught in the NFL. Of course, the Steelers have also been one of the very best teams in the NFL during that span as well, so getting off to a white-hot start isn’t the be-all and end-all, even though wins are always preferable to losses.

The longest stretch the Steelers have managed in recent years was in 2010, coincidentally enough without Ben Roethlisberger while he was serving a four-game suspension, during which they won their first three games. They nearly won the fourth, but allowed the Baltimore Ravens to march down the field for a fourth-quarter comeback.

The Philadelphia Eagles threatened the same today, but it ultimately would not be enough, and the Steelers put up 38 points, including four touchdowns from rookie wide receiver Chase Claypool, who caught three touchdowns passes and ran in another one.

This is far from a perfect team, but there is a lot of talent up and down the roster, and that individual talent has shone in the right moments frequently enough to stave off defeat four weeks in a row. The most important thing is that they have closed games. If they can continue that pace through the final 5-10 minutes of the fourth quarter, it bodes well for more victories.

Up next is an interesting challenge against the seemingly soon-to-be 4-1 Cleveland Browns. If they want to keep ahead in the division, they need to stretch their streak up to 5-0.