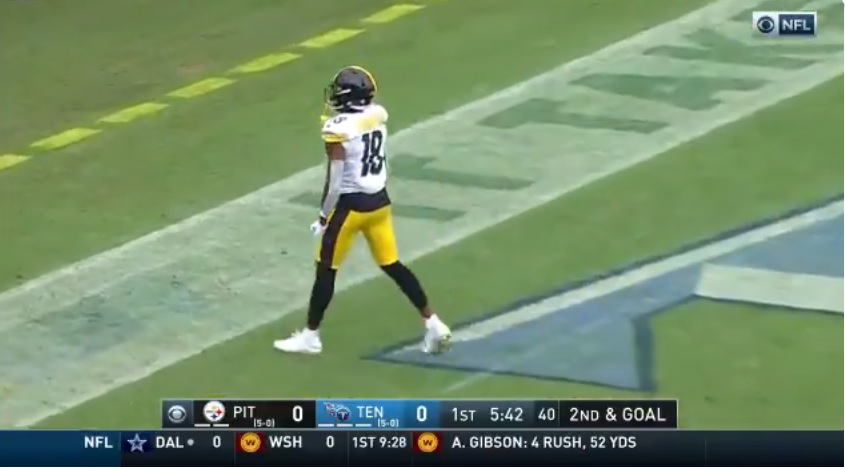 It’s not how you start, it’s how you finish. The Tennessee Titans almost proved that to be true today. Almost. A Stephen Gostkowski 45 yard field goal that would’ve tied the game sailed wide right, allowing the Pittsburgh Steelers to hang on to a wacky 27-24 win. Pittsburgh built a big enough lead, once up 24-7, and move onto 6-0 for the season.

Pittsburgh found the end zone on its opening drive for the first time in 24 games, Week 15 of the 2018 season against the New England Patriots. They did it in impressive, methodical fashion. A 16 play, 75 yard drive. Ben Roethlisberger and the offense came out throwing and converted on third down against the Titans’ worst third down defense. The Steelers went 4/4 on third down and capped things off with Roethlisberger fitting a bullet pass to Diontae Johnson for an 11 yard score.

It was more of the same the next drive. After the defense forced a three and out, Pittsburgh again marched downfield. 13 plays, 61 yards, Again, the offense kept things going on 3rd and long. 22 yards to Eric Ebron on 3rd and 14, another 21 yard completion to JuJu Smith-Schuster on 3rd and 12. Benny Snell ran behind FB Henry Mondeaux for a one yard score off left side to make it 14-0.

Tennessee fought back the next drive though had plenty of luck on their side. A third down completion bounced off a Titans’ receivers hands into the falling arms of Adam Humphries, picking up 19 yards on 3rd and 9. Later, Vince Williams popped Ryan Tannehill and the ball came out but recovered by Tennessee. The next play, Tannehill hit Corey Davis for a four yard score.

Pittsburgh added a field goal and their third touchdown of the half the next drive. Ray-Ray McCloud raced back 57 yards on a punt return, setting up Diontae Johnson’s second touchdown three plays later. It was Johnson’s first game back after missing last Sunday with a back injury and it was by far his best game of the season. Pittsburgh had the chance for more points at the very end of the half following a bad snap to Titans’ punter Brett Kern but Ben Roethlisberger’s heave into the end zone was intercepted as time expired. Pittsburgh took a 24-7 lead into the break.

In a rare switch-up, Pittsburgh elected to receive the first half kick, meaning Tennessee started with the ball in the third quarter. Their hopes of resetting the tone and pace of the game were dashed. TJ Watt sacked Tannehill on 2nd down, Terrell Edmunds broke up a third down pass over the middle, and the Titans were forced to punt. The Steelers turned the ensuing drive into a Chris Boswell 30 yard field goal.

Credit to Tennessee, who showed life the next drive. Tannehill hit WR AJ Brown for a 73 yard score over the middle. A poor angle and tackle attempt by Minkah Fitzpatrick gave Brown daylight to run roughly 60 yards to the end zone. A second Roethlisberger interception off a tipped pass let Stephen Gostkowski connect from 51 yards out, making things 27-17 and a ballgame again.

For the rest of regulation, it was all Tennessee. Pittsburgh went five plays and punted. In return, the Titans mounted a 12 play, 70 yard march to the end zone. Robert Spillane stuffed Derrick Henry on the goal line on 3rd and goal but Minkah Fitzpatrick was penalized on 4th down. Henry dove over the goal line the next play. Ben Roethlisberger put together an impressive looking drive to grind the clock but on 3rd and 12 with the Steelers in field goal range, forced a throw over the middle for JuJu Smith-Schuster. Safety Amani Hooker picked it, giving the Titans the ball with two minutes left and down just three. Roethlisberger finished the day with three interceptions.

Tannehill led the offense on a 12 play, 52 yard drive. Gostkowski lined up for the 45 yard attempt but pushed it slightly right, their comeback big falling just short. Tennessee falls to 5-1 on the season. Pittsburgh will take on Baltimore next Sunday at 1 PM/EST.

NOTES: The Steelers are 6-0 for the second time in team history….Diontae Johnson (leg) and Robert Spillane (left shoulder) suffered injuries in the win….James Conner led either team with 20 carries for 82 yards…Derrick Henry was held to 75 yards and 3.8 per carry…TJ Watt’s 40 sacks are the most through the first four years of any Steeler…Vince Williams paced the defense with ten tackles..