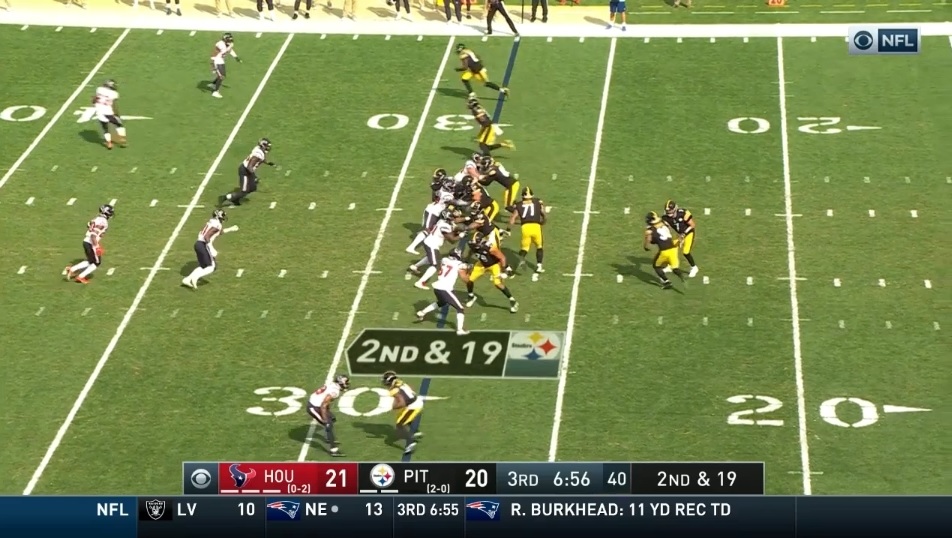 Back in May, I wrote a disappointing headline to an article: Steelers Among Most Likely Offenses To Run On 2nd And Long.”

In it, I wrote that with Ben Roethlisberger under center, the Steelers would no longer be so counterproductive in those situations.

Through the first three games, that hasn’t happened.

Ben Baldwin of The Athletic compiled the data for teams who most frequently run on 2nd and long. The Steelers rank 6th in run rate. Check out the numbers below, the second tweet (because I can’t get the top one to unembed. Worth noting the Steelers do rank much better in the early-down pass rate category).

Which teams are the best at avoiding rushing on 2nd & long?

Falcons, what. are. you. doing. pic.twitter.com/CYXWhPGbiI

The only teams who run more on 2nd and long than the Steelers are: Miami, Denver, Cincinnati, the Jets, and Atlanta. Not exactly a list of the best teams in football. It’s no surprise to see teams like Seattle, Kansas City, Baltimore, and San Francisco near the top.

Ben Roethlisberger has been sacked three times on 1st down this season. Randy Fichtner has called a run play two of those three games, runs that resulted in gains of three and five yards. Pittsburgh punted both times. The drive where they threw it didn’t result in another first down but did end with a field goal.

To be fair to Pittsburgh and Fichtner, a couple things to consider. They’ve held leads late in all three of their games, all victories, providing an obvious incentive to run in otherwise pass situations. Grind clock, keep the other offense off the field.

And the Steelers are relatively successful running in these situations. They average 4.9 yards per carry on 1st/2nd down runs of 7+ yards to go. That’s eighth best in football and a respectable number, up from four yards per carry a year ago.

Still, this is a team with Ben Roethlisberger at quarterback. The offense is at its best when he’s running the show, as evident by all their success in two minute situations. Running on 2nd and long significantly increases the odds of punting on 3rd down. Teams who have studied the data, like the Chiefs, like the Ravens, like the 49ers, have adjusted, and have among the most potent offenses in football. Teams who aren’t as data-heavy, like the Bengals and Steelers, rank near the bottom.

Three games is a small sample size and the Steelers’ run rate is likely to increase as they get in more competitive games and ones where they’re forced to catch up. But if that rate doesn’t rise, it’ll be tough to win shootouts against the AFC’s most potent offenses.