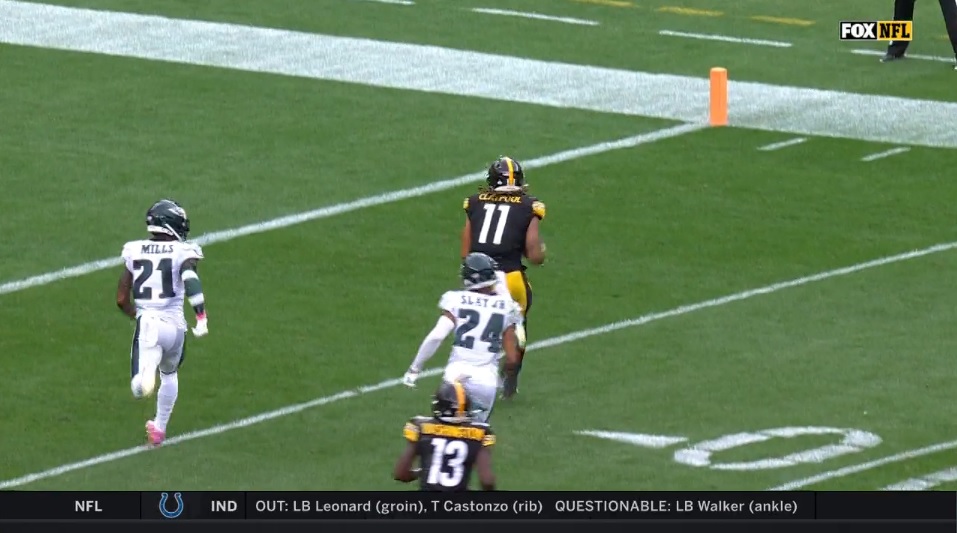 Let’s just retitle this to “Chase Claypool Stats Of The Weird.” Cool?

– Let’s start with Claypool because we have a long list of weird to throw at you guys.

– The first Steelers’ rookie in team history with four touchdowns in a game.

– Only the third Steeler ever with for of them. He joins WRs Roy Jefferson in 1968 and Ray Mathews in 1954 to accomplish that feat for the black and gold.

A handful of other rookies with four TDs include: Emmitt Smith, Earl Campbell, Gale Sayers, and Jim Brown. Awfully good company to keep.

– He’s the first Steelers’ rookie wideout with a rushing TD since Louis Lipps in 1984.

– And funny enough, this isn’t his first four-touchdown game. He had four receiving touchdowns as a senior against Navy, a 7/117/4 performance.

Ok, how about some non-Claypool stats of the weird?

– Carson Wentz completed 20 passes. Half of them went to Travis Fulgham, who entered today with two career catches.

– Miles Sanders’ 74 yard run was the longest given up by the Steelers’ defense since Leonard Fournette’s late 4th quarter 90 yard score in 2017.

– McCloud is the first Steelers receiver to lead the team in rushing since DHB had 60 yards in a 2016 loss against Miami.

– The Steelers’ defense has regained the NFL’s sack lead. They have 20 while the Eagles have 18. Through the first quarter of the season, Pittsburgh remains on pace for an 80 sack season. The NFL record is 72, set by the Bears in 1984.

– Both third down defenses sucked today. The Eagles went 10/14. The Steelers 11/15. It’s the first time since 2015 that both teams had at least ten third down conversions. And the last time both teams had 10+ conversions and at least a 60% conversion rate was the year before, a 38-10 Ravens win over the Panthers. That day, Baltimore went 10/13 whereas Carolina went 10/15.

Pittsburgh hadn’t allowed double-digit third down conversions in a game since a 22-20 loss to the Ravens way back in 2013. Baltimore went 10/17 that day.