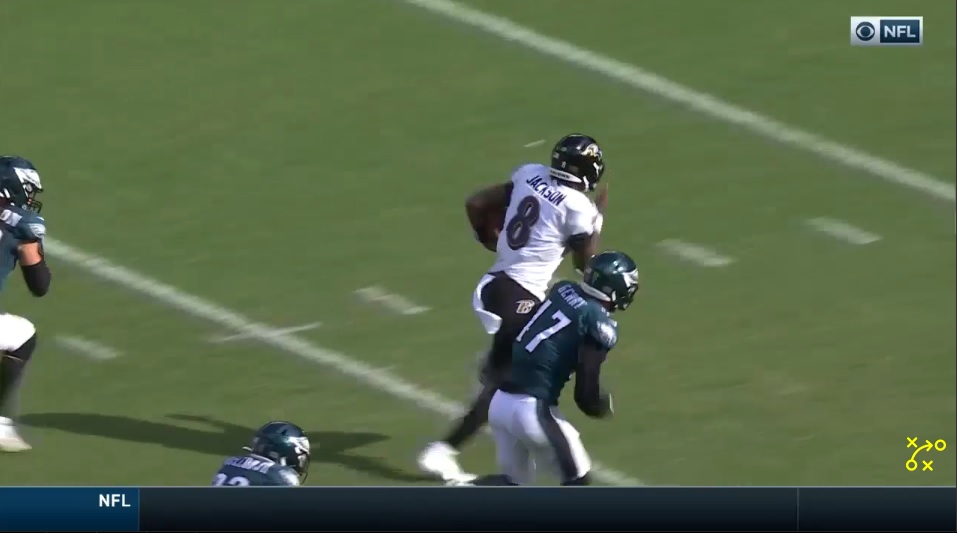 Here’s our analysis of the Baltimore Ravens’ offense.

Just like last year, this is a potent running game. They now have the NFL’s top ranked running attack. First in yards, 164.3 per game. And first in yards per carry at 5.4. There’s a pretty even split in terms of division of labor. Mark Ingram and Lamar Jackson are tied for the team lead with 50 carries each. Gus Edwards is right behind them at 48 with rookie JK Dobbins at 25. Ingram, Jackson, and Dobbins have each found the end zone twice while Edwards has crossed the goal line once. Jackson is averaging nearly seven yards per carry while Dobbins is just over six. Big plays from this offense. Again, not a surprise, and that’s why they’re 3rd in the league with 30 runs of 10+ yards. Pittsburgh has allowed the second fewest runs of 10+, just ten of them, so this will be a great battle.

So it’s hard to key in on one guy because there are so many pieces in the backfield. Rookie wide receiver Devin Duvernay also has a 42 yard carry, too.

Schematically, they’re as varied as anyone. Reminds me a bit of what the Eagles do though the Ravens’ run game is much more potent across the board. Quarterback, running back, offensive line. They run the read option, which a lot of teams do, but they couple that with a TE arc block. Read the base end/OLB and have the TE run off his hip and take on a second level DB. In the second clip I’ll show, they’re running inverted veer. Typical read option has the QB keeping outside and the back inside. Invert it and the RB goes outside and the QB inside.

Like the Eagles, they’ll run Bash too. RB runs backside of the sweep.

Just like last year, the Ravens will load up the line with multiple TEs and FBs. Patrick Ricard plays as much fullback as almost anyone in football. On the field 35% of the time. So Steelers will be in base quite a bit and we’ll see their over front some too, I’m sure. Many of their runs come out of pistol, allowing for playaction coupled with a downhill run action you won’t get out of traditional shotgun with the back sidecar.

Some other offensive stats. Their offense has statistically taken a step back but most teams would love to have the Ravens’ regression. 29.8 points per game, 8th in football, down from their league-leading 33.2 a season ago. In the passing game, they’re averaging 7 YPA; that’s tied for 22nd. Ten pass touchdowns are also below average, tied for 20th, while they’ve been sacked 15 times, also below average. Ditto with third down (42.1% – 19th) while they are slightly above average in the red zone at 63.2%, good enough for 13th. Where they are winning is TO differential. +6 this season, largely because they’ve turned it over only five times.

Lamar Jackson still playing well even if this offense isn’t humming the way it was before. Josh will talk about him in the individual section below but I’ve seen Jackson take steps forward as a thrower. And he’s still got great zip and ability to throw off-platform.

Jackson is completing 63% of his passes with ten touchdowns and only two picks. As I noted above, he’s been sacked a bunch this year. At least once every single game and 2+ in four of six games.

Biggest two pieces of the pass game are Mark Andrews and Hollywood Brown. Brown has taken a big step forward in his sophomore season, bulking up and staying healthy. Those two have combined for 47.2% of the team’s targets, 44.2% of the receptions, and 60% of their touchdowns. Pass game runs through those guys. Rookie JK Dobbins is tied third on the team with 11 receptions; rare for a rookie, he’s the guy in no-huddle and two minute drills.

Conceptually, their Spot/Snag is a popular look. Three man combination with a flat, curl (the spot/snag) and corner. Easy triangle read for the QB to make.

They love divide routes that stress safeties. Dagger and Milles are popular concepts to stretch the middle of the field and put the safety in conflict. Seam/dig, post/dig combinations downfield. In the first clip (Mills, Post/Dig combo) you see the safety take a step down on the TE running the dig. End zone helps him squeeze the throw but it opened up the post to Brown. Second look against the Eagles is dagger. Seam/dig combo.

With that comes another tough test for the undefeated team in black and gold, this time against division rival Baltimore at the big crab cake in Maryland.

Fresh off of a physical matchup with the Titans, the Steelers have to adjust slightly for a more misdirection offense that has speed to burn at all skill positions.

Headlined by reigning MVP Lamar Jackson, the Ravens aren’t as explosive as the 2019 version, but they’re consistent, having put points on the board in every quarter this season.

Jackson continues to set the tone offensively with his arms and legs. This year, he’s extending plays more outside of the pocket and has some ridiculous arm strength and accuracy when throwing off platform.

Fortunately for Jackson, second-year receiver Marquis Brown has learned to play Lamar ball this season, working in sync with his quarterback on extended plays, working himself open for big chunk plays.

Baltimore uses a lot of play-action – just like Tennessee did – to scheme up easy throws for Jackson, especially on the move. I’m betting this one was designed to go to Nick Boyle delayed on a crossing route over the middle, but that’s covered. Jackson does a great job extending the play towards the boundary, which gives time for Brown to slip inside his defender for the 33-yard pitch and catch to the Washington 1-yard-line.

It’s hard for corners to cover for a long time in today’s NFL. It becomes near impossible when you have a quarterback who is mobile like Jackson that can extend plays and flick the ball to his receivers downfield with his.

Brown isn’t producing a ton this year, but he’s hit some downfield throws.

The go-to guys for Jackson are tight ends Mark Andrews and Nick Boyle as of late.

Andrews has an argument for a top 3 TE in the NFL. He’s a vertical threat that knows how to stretch the seam, makes a ton of tough catches, is physical with the football in his hands and is a very good blocker.

Against Washington in Week 4 he really stresses them vertically.

Again, play-action here to draw eyes to the run game, which gives Andrews just enough time to slip up the seam, and gives Jackson just enough of a window to fire a dart into his go-to TE for six.

With such a successful run game, the Ravens can lean heavily on play-action, giving defenses so much to worry about.

When Jackson keeps the ball? Look out.

He’s an absolute blur with the football in his hands.

Fortunately, the Steelers won’t have an edge defender like Washington’s Ryan Anderson screw up on these types of plays.

Patrick Ricard seems to be the secret weapon for the Ravens in the run game. He’s a strong lead blocker as a fullback and gets some occasional work in the passing game.

Lately, I’ve seen the Ravens line him up as a tight end and motion him across the formation for a kickout block while running something on the backside.

Watching this touchdown by Gus Edwards in Week 6 against Philadelphia. Also, keep an eye on the masterful job center Matt Skura does climbing to the second level to pick up the linebacker, clearing the lane for the touchdown.

Just a fantastic job all around here. I expect we’ll see these types of runs on Sunday.

In the backfield it looks like it will be a combination of Edwards and rookie JK Dobbins on Sunday with veteran Mark Ingram battling an ankle injury.

Edwards will be the downhill thumper while Dobbins will see the off-tackle and passing game work, most likely.

The offensive line really makes this system hum. By no means is it an elite group, but man it works well together.

Stanley and Brown Jr. are an elite tackle duo. The interior is where I have questions. Skura has played well this season and looks good in the run game, while Phillips is turning into a mauler and Bozeman thrives on the move.

The problem is Bozeman, Skura and Phillips will have their hands full with guys like Stephon Tuitt, Cam Heyward, and Tyson Alualu. It could be a long day for the interior of the Ravens’ OL.

On special teams, there’s not much more to say about kicker Justin Tucker and punter Sam Koch. Tucker is likely destined for the Hall of Fame, while Koch certainly has the credentials. They’re nearly flawless for the Ravens.

This is a John Harbaugh-coached team, so don’t be surprised to see a punt fake on Sunday. They’ve pulled it out at least once this season and had success. It’s definitely in his back pocket.

In the return game, the Ravens entrust rookies James Proche II and Devin Duvernay to return punts and kicks. Both have looked solid in the role, taken on the roles and running with them.

This is such a well-coached team that it’s hard to find real flaws.