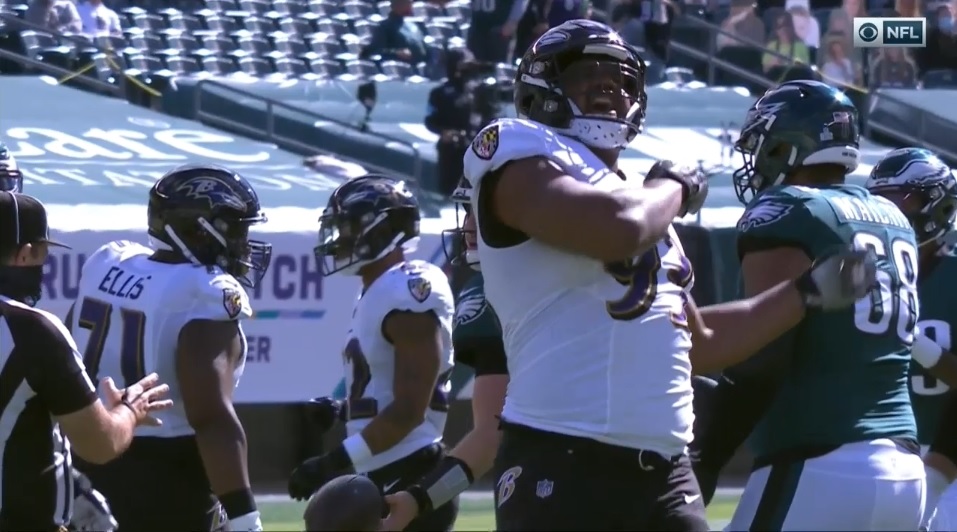 On paper, the run defense is a little up and down. 20th worst YPC, allowing a healthy 4.6 YPC, but teams haven’t found the end zone against them. Just four rushing touchdowns in their first six games. They don’t play a lot of base 3-4 defense, only utilizing it against 6th offensive linemen. Of course, that’s something the Steelers do a decent amount of. Jerald Hawkins is averaging about ten snaps a game.

Still, this is a stout run defense that holds the point of the attack well and slants and penetrates against zone runs well.  It’s hard to find an area, inside or perimeter runs, to exploit. Trying some of the Steelers’ WR sweeps may not work. Baltimore defenses them well.

Rookie LB Patrick Queen is starting his career similar to Devin Bush, not playing in dime, but is still leading the team with 44 tackles. Colorful stat line overall: 44 tackles, 4 TFL, 2 sacks, 2 FF, 1 pass deflection. Some other defensive stats. No defense is allowing fewer points per game than the Ravens’ 17.3. That stat is slightly deceiving though. In three games, they’ve allowed 17 or fewer. In the other two, they’ve given up 34 and 28. Their third down defense is excellent, 6th best at 34.7%. The red zone defense is oddly suspect, 30th, allowing offenses to find the end zone 76.9% of the time. This defense is good at taking the ball away with 11, 7th most in the NFL.

A talented, improved unit. Their 6.7 YPA is tied for the 5th best mark while the eight touchdown passes is tied fourth in football. Rush and cover go together and you’re seeing that in Baltimore. They have 22 sacks, tied for fifth in the NFL and second most of teams who have played just six games (only trailing Pittsburgh’s 26).

And the pressure’s coming from a ton of different sources. Twelve Ravens have at least one sack. Compare that to Pittsburgh who have *just* ten. No team is blitzing more than the Ravens at 46.1%. That’s even slightly more than the Steelers (44.3%). Get this. Their defensive backs are responsible for eight of those sacks, showing they’re successfully sending anyone and everyone. And they just traded for Yannick Ngakoue. Rich getting richer.

Secondary is strong, too. Led my Marlon Humphrey, who should shadow JuJu Smith-Schuster in the slot. He did on Tyler Boyd against the Bengals in Week 5. Humphrey is a rare dude. He’s tied with Myles Garrett for the league lead with four forced fumbles. And Humphrey is a cornerback. Crazy. Knocked the ball out of JuJu’s hands in OT last year. Watch out for #44.

As Keith Butler alluded to, they’re an aggressive bunch that will play true and blue Cover 0. No safety help over the top. All-out pressure here vs empty leads to a Peters’ INT.

Overall, they play a solid mix of man and zone. Not too heavy in either direction.

Big tendency alert. Watch out for the third down DB blitz from the boundary. #36 safety Chuck Clark and #32 DeShon Elliott. See it all the time. Here are all the down/distances I have it marked down in my notes.

Sense a theme? Here’s a look at it.

Play a ton of sub-package. Often one defensive linemen in passing situations. 1-4-6 groupings. Put their top pass rushers on the field and force the o-line to figure out who’s coming and who’s dropping. Not easy. 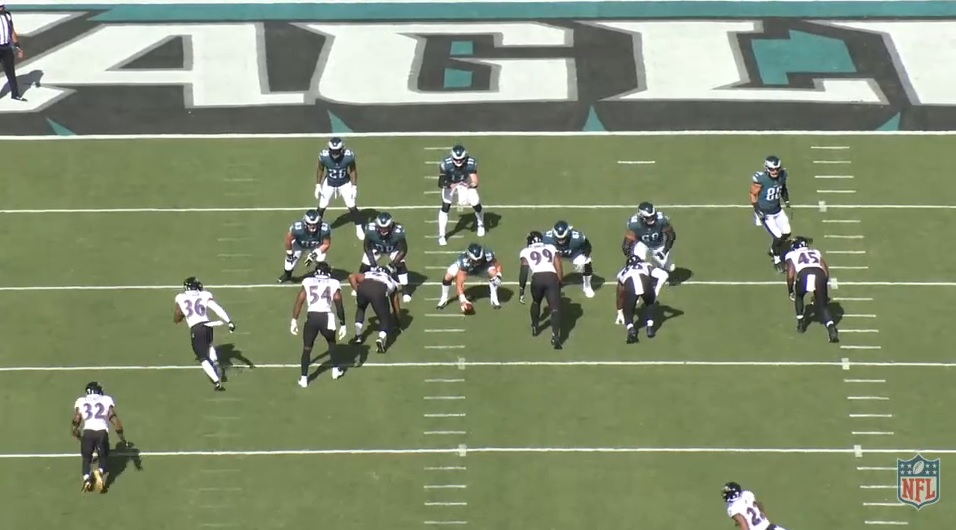 Travelling to Baltimore is never and easy trip and the Ravens have added a lot of new faces to the defense. Through the draft, free agency and the trades they have added players on all three levels. They heavy rotation on the defensive line and at linebacker and will use any player on the field to blitz.

Let’s start with maybe the biggest player out there Calais Campbell. The former Jacksonville Jaguar was brought in this year for a fifth round pick.  He will line up everywhere from the 0 tech over the center out to the edge. He’s 6’8” and is athletic and agile mixed with strength and length and is very disruptive. Brandon Williams is coming off the Covid list and tough to move, has a good anchor and uses his hands well while doing his best work against the run. Derek Wolf is coming off a concussion/neck issue causing him to miss the last game but the former Bronco adds to their pass rush, has solid agility and plays with his eyes in the backfield.

Here is sack and show of strength by Campbell (93). He is lined up over the right tackle and when the line slides to the right he uses his right arm to thrown the right guard aside on his way to the sack.

Jihad Ward is on his third team and is playing well at defensive end. He has good strength and sets the edge well. Another new face is Yannick Ngakoue who was traded to Baltimore this month and he is a fantastic pass rusher. He has 42.5 sacks in 4+ years has very good quickness, an array of pass rush moves and can win with power or speed.  Backing up inside they have a couple of rookies and a veteran. Justin Madubuike can play in any scheme has strong hands, good play strength and diagnoses plays well.  Broderick Washington is an athletic, high motor player who can play outside as well. Justin Ellis is the veteran and is a clogger in the middle with very good strength and can handle double teams well.

At linebacker they have another rookie Patrick Queen.  He’s a true sideline to sideline MIKE linebacker who works through traffic well and has the speed to cover RB/TE’s. Next to him is former Steeler and WILL linebacker L.J. Fort who likes to play downhill attacking gaps, shows good pursuit and is used to cover backs. Pernell McPhee is their rush backer he plays with good leverage and uses his hands well and has a good bull rush. Matt Judon is the SAM linebacker who will play on the outside and inside in sub packages and has active hands and solid quickness off the ball.

Rookie Malik Harrison plays on the inside and processes well is good in the short area and is strong filling gaps. Chris Board got a few snaps two weeks ago and flows to the ball well and aggressively takes on blockers.  Tyus Bowser is and outside linebacker use primarily to rush of the edge. He has good athleticism to play the run, has some bend and is most effective as a speed rusher.  Another young rusher is Jaylon Ferguson who is better using power with bull rushers and likes to use push/pull move on tackles.

Here is nice rep by Bowser (54) on the right edge reading the play quickly, attacking the blocker to the outside and shedding to make the tackle.

The cornerbacks are a strong group led by their top three.  Marcus Peters is another player brought in via a trade. He’s usually the left corner was a first team All-Pro has good size and very good ball skills. On the other side is Jimmy Smith who has even better size at 6’2”, is solid in Zone coverage, closes on the ball well and is a strong tackler.  They’ll move him around to the slot and safety as well.  Marlon Humphrey is a very good Man cover corner who plays in the slot and outside.  He has good awareness in Zone coverage, supports the run and loves to try and punch the ball away from ball carriers.

In this clip, Smith (22) will switch from over the slot to a deeper/safety position over the inside slot and will take the drive route across the field and show good ability to close and break up the pass.

At safety the Ravens have Chuck Clark and DeShon Elliott. Clark will play in the box and in Cover 2 deep plays the run well and is a strong tackler. Elliott can handle the Cover 1 deep safety position, will play in the slot on tight ends and has good awareness in Zone coverage.

The Ravens are going to bring both safeties on this rep and drop two linebackers in coverage and Elliott (32) has a clear bath to the QB.

The backups are limited due to injuries and they may need to bring someone up. Khalil Dorsey is a rookie corner who fits best as the nickel.  Jordan Richards is a former second round pick of the Patriots who has bounced around a bit. He doesn’t have any defensive snaps yet but fits as a box safety.  On the practice squat they have Geno Smith a big hitting safety and DB Nate Hairston who was with the Jets earlier in the season and has 13 starts in his career.