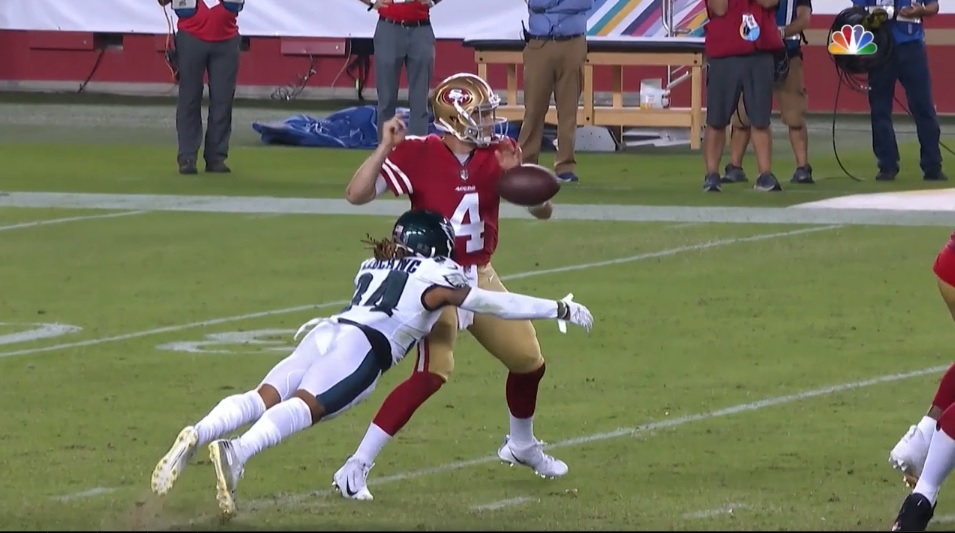 Philadelphia has one of the NFL’s better run defenses. They’re allowing just 3.9 YPC, that’s top ten in football, though they have allowed six rushing scores, which is on the higher end of things. So running in the red zone may be the way to go. They’ve also given up 12 runs of 10+ yards, 12th best in football over the first month. Led by DC Jim Schwartz, they’re running a 4-3 defense.

I’d define this front as a “fast flow” defense. They want to limit the ball on the perimeter to the front side. Their defensive line is aggressive, penetrating, with linebackers who get downhill in a hurry. There’s a clear upside to that. It’s hard to run outside zone or tosses to the frontside.

But it comes with a consequence too. Because of that aggressive nature, they don’t have great backside contain and often times when backs bust off big runs, they’re bringing the run back. An example.

The Eagles play a variety of fronts. They can play an under front and spin the SS close to the LOS. 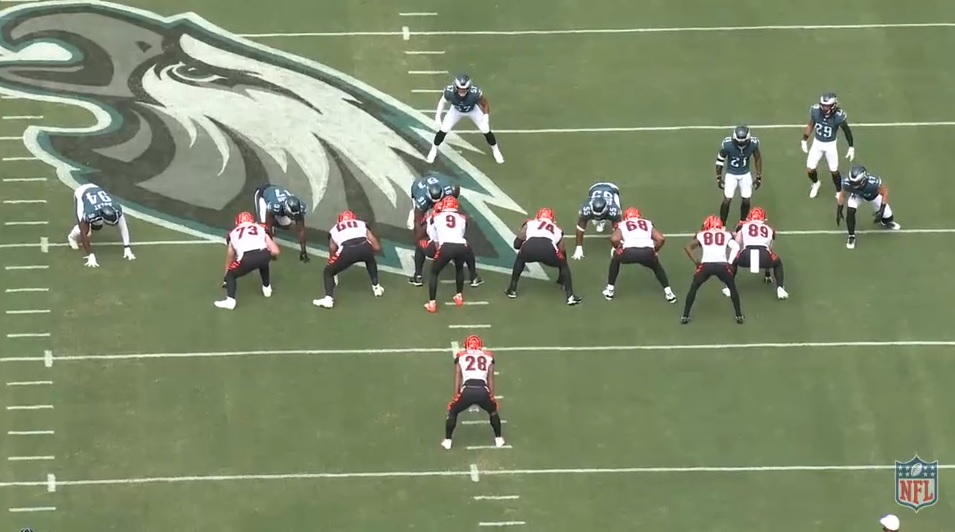 They can go wider with their DTs, aligning each as 3 techs. 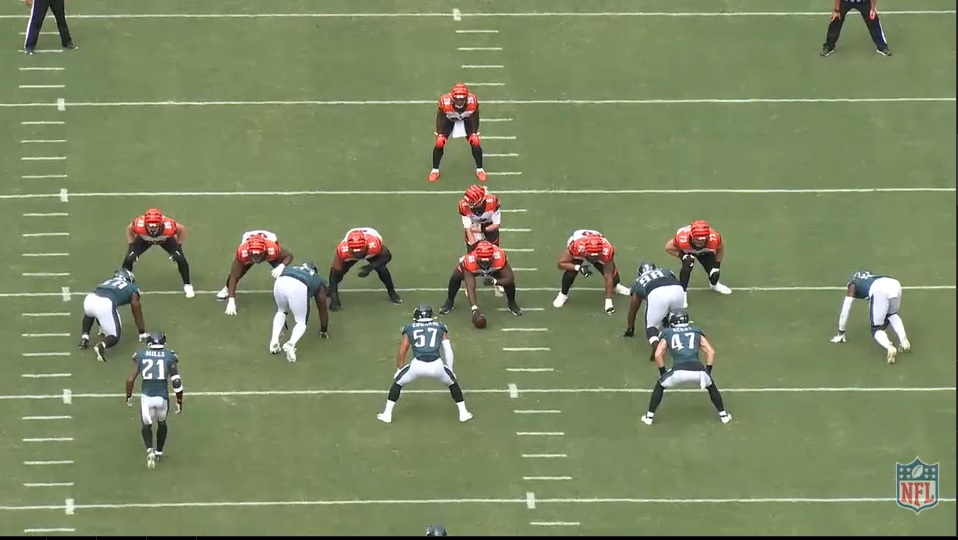 They’re a defense that throws a lot of looks at you and have a deep d-line rotation that keeps guys fresh. That always stresses communication and mental/physical readiness.

Couple other stats. They’re 20th in points per game allowed at 26.8 per game. They’ve allowed at least 20 points in all four of their games. They have a top five 3rd down defense, opposing offenses converting just 37% of the time. But they’re 23rd in red zone defense, allowing TDs at nearly a 70% clip.

The strength of this Eagles’ team is their front four, as we touched on above. They have an excellent group of pass rushes. Great depth, not just one guy. They’re the only team with more sacks than the Steelers, recording 17 this season. It’s not by blitzing either. They blitz just 23.2% of the time, bottom third in football, meaning they rush four and drop seven. 13 different Eagles’ players have at least a half-sack through four games. Eight have at least a full sack. And ten different defensive linemen have logged 15+ snaps. I’m betting that’s most in football. Watch out for Malik Jackson. While he has just a 1/2 sack this season, he leads the team with nine QB hits. Josh Sweat has had a Bud Dupree-like breakout season, three sacks already after having four his first two seasons.

This d-line likes to finish their checks too. They get a chance to put the QB on the ground, they’ll take it, even if it’s a little late.

From a pure coverage aspect, they haven’t been nearly as impressive. They allow a decent amount of completions of 20+ yards – 12 of them, squarely in the middle among defenses – and have intercepted just two passes this season despite not facing a murderer’s row of QBs (Haskins, Goff, Burrow, Mullens/Beathard).

Ok, let’s talk coverage. The Steelers were burned by their “Zombie” call against the Giants to open the season. A post/over coverage check where the safety cuts the over and the backside corner replaces to become the FS. Joe Haden didn’t get there in time and Darius Slayton cashed in a big touchdown. Eagles have the same coverage check. Hope Pittsburgh can take advantage of it in their favor this time.

Eagles do a nice job holding and disguising their coverages. Show two high looks and spin down pre-snap. They also invert coverages, running as much Inverted Cover 2 as I’ve seen from any defense lately. This is an example or pre-snap rotation. Two high to Cover 1.

This was against Joe Burrow so maybe they were testing a rookie QB but the Eagles aren’t afraid to get exotic and dial up different pressures and looks against empty sets. Here they are with five down linemen. 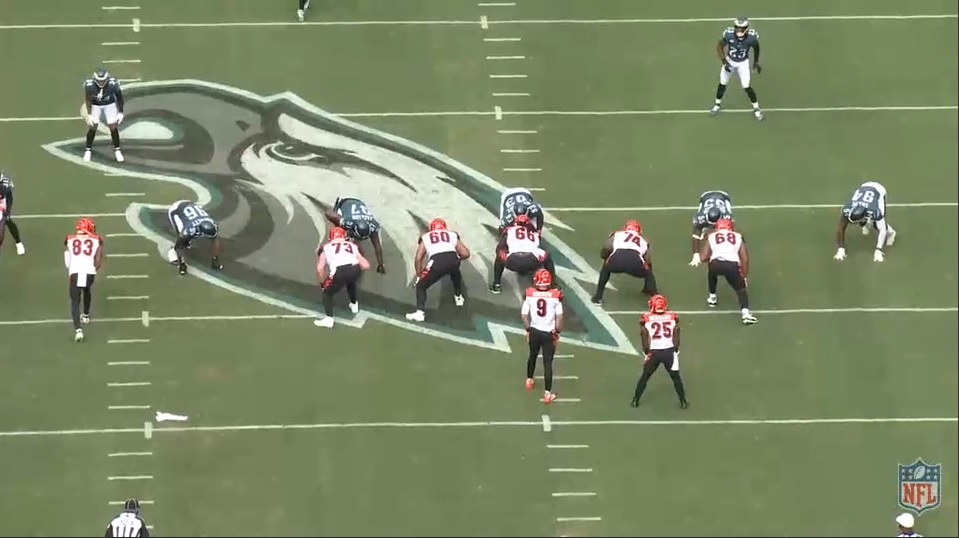 And a Cover 0 pressure in the red zone. Only five to block and forced the ball out hot.

Numbers show Schwartz doesn’t blitz a lot. But one of his favorites are a nickel/linebacker field side blitz. Will do it on any down or distance, but saw it twice on 3rd and 10. slant/alignment. Alert a 2i/2 tech between center and guard He steps/slants inside to draw the center and get the LB to twist behind him.

The big name up front is Fletcher Cox. He lines up inside in the 1/3 tech positions and will produce versus the run and the pass.  He’s has a good motor, is very strong and uses his length to stack and shed blockers and is relentless in the pass rush using power to bring the pressure. Next to him is Malik Jackson and he may be even stronger than Cox.  He plays the 1/3T area with good leverage, has very strong hands and can toss lineman aside. He can bull rush just about anybody and has a strong chop/rip as well.  On the outside the Eagles have Josh Sweat and Brandon Graham. Sweat is the speed rush player often lined up as the 7 tech he has nice bend, likes to dip and rip and has very good athleticism. Graham is the strong side DE playing the 5-7 tech. He likes to power rush using his strength and don’t leave just a tight end to block him, it won’t work.  The defensive ends all crash hard inside from the backside and are susceptible to rollouts and reverses.

Here is look at the strength of Malik Jackson (97). He’s lined up on the right side as the 3T. At the snap he aims toward the B gap before turning into the LG and uses his power to shove him back to the QB with one push and then blowing up the QB.

Backing them up they have Hassan Ridgeway a wide body defensive tackle who has a solid anchor and flows to the ball well. Former Steeler Javon Hargrave plays in the 1/3 tech position and you know what he can do.  Quick, agile and can get in the backfield quickly.  Derek Barnett backs up Sweat and is athletic and coming off his best year with 6.5 sacks and 22 QB hits in 2019. Rookie Casey Toohill backs up Graham and has added strength and weight to go along with his high motor.

The linebacker group is a young group. In the middle is T.J. Edwards who was an undrafted free agent in 2019. He is a good processor and tackler and does most of his work between the tackles. He often comes out on Nickel and Dime packages and did suffer a hamstring injury last week so his availability is unclear.  Nathan Gerry is the strong side linebacker and rarely comes off the field.  He’s a high motor player who works well in space as he will get caught in the traffic vs the run. He’s usually the only linebacker in Dime packages.  Duke Riley starts on the weak side.  He’s very athletic and has speed to chase and run with RB’s and TE’s in coverage.  He’s quick to fill gaps vs the run but will duck around blocks rather than take them on.

This clip is a good example of Edwards (57) processing the play, filling the gap and taking down the running back with authority.

Backing up the linebackers they have more youth including Genard Avery an undersized pass rusher who can pressure from the outside. Alex Singleton, the former winner of the Canadian Football League Most Outstanding Defensive Player Award (2017) had a pick six last week while filling in for Edwards. Shaun Bradley is another speed linebacker who is a bit undersized and is could use this year to bulk up.  Davion Taylor a rookie from Colorado who’s fast and athletic, close to a safety/LB hybrid.

The defensive backs are led by veteran Darius Slay.  He’s a strong Man coverage DB who is often used to cover the opponents best receiver.  The corner usually across from him is a name you might know in Avonte Maddox. The former Pittsburgh Panther is a physical, fast corner who won’t back down from a challenge or shy away from helping in the run game.  He is nursing an ankle injury and may not play. Nickell Robey-Coleman is used as the nickel back and will be used all over including to blitz or rotate to the deep safety. Cre’von LeBlanc is also uses as a nickel back and is a physical player who will blitz or play in the box and is used to cover TE’s in Dime.

The free safety is Rodney McLeod another player with versatility who rarely comes off the field. He’s better in coverage and you’ll see him deep, in the box in Nickel and covering in the slot in Dime.  Jalen Mills is the strong safety but played corner last week taking the place of Maddox. He has versatility and is active in the box willing to fill gaps and make tackles in the run game.  He’ll often line up as the deep safety in Cover 3. Markus Epps is a core special teamer who will play linebacker in Dime packages. He replaced Mills at safety last week and was active with 8 tackles but most notably was hurdled by Brandon Aiyuk on a touchdown run.  K’Von Wallace is another rookie with good athleticism who was versatile in college but better suited for in the box and capable of covering TE’s.

Mills (21) is lined up over the receiver in the tight slot.  He reads the quick throw immediately and makes a beeline to the ball to get the tackle for a loss.