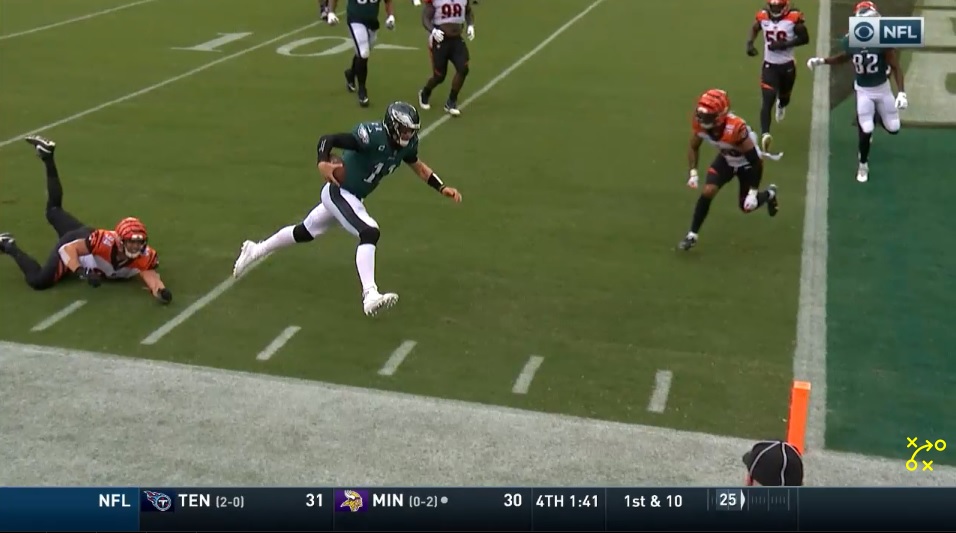 Here’s our breakdown of the Philadelphia Eagles’ offense.

The Eagles’ rank tied for 14th in yards per carry at 4.2. Led by Miles Sanders, healthy now after missing time early in the year, sporting a healthy 4.6 average. They have though just ten runs of 10+ yards, tied for 21st, but this is a potent rushing attack. Also worth noting Carson Wentz can scramble but also function as a designed runner on zone reads, like this TD against the 49ers last week.

The Eagles love to run wham early in games. Against the Bengals, on the second play of the game (first run), they ran wham. Versus the 49ers, it came on the first snap. TE earholes the three tech as the linemen immediately work to the second level. It’s an effective scheme that takes advantage of leverage and angles to deal with the obvious size matchup. And what this does is get that linemen thinking about the next time he’s getting into that type of car crash. Good way to slow down aggressive, penetrating 1 and 3 techs.

The run scheme is varied. Inside zone, crack toss, and a Bash concept that not a lot of teams run. RB sweep to the backside of pullers. Check it out. Linebackers flow the wrong way keying the puller with the back looking to hit the edge.

Also worth noting backup rookie QB Jalen Hurts has been active and on the field the last two weeks, recording five carries. Extra wrinkle in the run game. Key moment with him against the 49ers. Attempted to run Philly Special, a throwback from Hurts to Wentz, on the first play off a San Francisco turnover. Teams like to go for that killshot in sudden change moments. It didn’t work, well coached and defended by Kyle Shanahan and company, and Hurts pulled the ball down and ran for four.

Some other stats. Offense is 26th in points per game, only going over 20 in two of their four games and a “high” of 25. Not good enough. They’re average on third down, converting 43.3% of the time, with a below average red zone offense, finding the end zone 55.6% of their trips. That’s tied for 22nd.

Of course led by Carson Wentz, one of the few Eagles who’ve stayed healthy all four games this season. But he’s struggled since his Week One performance against Washington and even then, was really only good for the first half. He’s completing barely more than 60% of his throws and has a terrible 5.8 yards per attempt. That’s 32nd in football only ahead of Sam Darnold. He’s thrown just four touchdowns to seven interceptions, having three of four games getting picked off at least twice. And he’s been among the most sacked QB in football, 14 times. That’s tied for third most in the league.

To be fair, he hasn’t had much to work with. Barely any healthy receivers, an offensive line that continues to fall apart, but Wentz hasn’t rallied the troops. They have just 12 completions of 20+ yards, almost squarely average over the first month.

The route concept I’m most worried about is are their Sail Routes. Denver killed Pittsburgh on that, TE Noah Fant scoring a touchdown and another 20+ yard catch later in the game on the idea. A sail concept is a three man combination consisting of a flat, corner, and vertical/clearout route. Eagles design it well, often bringing an over route from the backside as the corner, and it’s one of their most popular concepts. They like to boot on 1st down and move the pocket for Wentz, often coupling that with Sail.

And this is a really nice third down concept. Mesh route with a zone beater. Run the mesh, a pair of crossing routes with a sitdown route between them. Mesh beats man, the sitdown finds the soft spot against zone. Good stuff here.

After a one-week hiatus due to COVID-related issues in Tennessee, the Steelers return to action Sunday at Heinz Field – with fans in the stands – to take on the cross-state Philadelphia Eagles.

The Eagles are so incredibly banged up early in the 2020 season, but they’re riding high this week coming off of a big win on the road in San Francisco on Sunday night, righting the ship (slightly).

Without guys like Alshon Jeffrey, Dallas Goedert, DeSean Jackson and rookie Jalen Reagor for parts of the season, Philly’s offense has been stuck in neutral. It certainly hasn’t helped Carson Wentz has been mostly a mess so far this season. If the last two weeks are any indication though, he’s turning things around in a hurry and is utilizing his legs more.

Wentz is really dangerous in the red zone with his legs. Not only will he extend plays all over the field with his legs when the pocket collapses, he becomes a very real rushing threat as the Eagles get closer to the end zone.

Maybe it’s about time teams start to pay attention to him bit more with his legs in this area of the field moving forward.

That’s the easiest rushing touchdown he’ll have in his career. That frontside Niners defensive end crashes hard and has no care in the world to view Wentz as a threat to keep the ball on the read-option. It ends with six.

With Wentz being a threat on the ground, the Eagles have turned to more RPOs, utilizing guys like Greg Ward Jr. and Zach Ertz in the middle of the field.

That’s a spectacular one-handed catch by Ertz in traffic, but look at Cincinnati middle linebacker Germaine Pratt here. Because the Eagles have some success running out of gun with Miles Sanders, it causes the linebackers to come downhill on the slightest hint of a run, creating just enough of a throwing window for Wentz to put the ball on Ertz for the first down.

With so many injuries, Doug Pederson has had to get creative with his scheme. Putting rookie quarterback Jalen Hurts on the field with Wentz causes some confusion for defenses.

The fake swing route to Sanders and screen right to Hurts works well, allowing Goedert to leak into the middle of the field for a chain-moving catch in scoring position. Don’t be surprised to see Pederson pull out some stops like this on Sunday in Pittsburgh.

If the Eagles are to have a shot at winning on Sunday though, they’ll have to get Jackson involved early, should he be healthy. That’s Wentz’s favorite wide receiver, as the two have impeccable timing on outbreaking routes.

If Jackson is a go on Sunday, don’t be surprised to see Pederson get Wentz and Jackson involved and in rhythm early with quick outs against cushion coverage. The duo has worked on this very route a ton of the last few years. Just pop on All or Nothing from last season to see some of the behind-the-scenes work the two put in together.

For the time being though, Wentz has had to turn to unproven weapons – namely Travis Fulgham – at receiver to try and move the ball offensively.

Fortunately for the Eagles, Wentz came through with a good deep ball in the third quarter on Sunday night, dropping this dime to Fulgham for the score.

It’s not like Fulgham is a nobody. He was invited to the Senior Bowl in 2019 and was drafted in the sixth round by the Detroit Lions. He bounced around a bit before landing with the Eagles and took advantage of the opportunity. I wouldn’t be surprised to see Wentz look his way more on Sunday.

In the backfield, I really like the combination of Sanders and Boston Scott. Sanders is a complete running back, one with speed to turn the corner, power to run between the tackles and excellent hands out of the backfield. He has a bit of a fumbling issue, but he’s a workhorse.

Scott is the diminutive, shifty back who runs low and hard to the ground and has good hands out of the backfield.

All that said, this group is fighting up front. Here’s how I expect them to line up left to right on Sunday:

Mailata made his first ever start in football on Sunday and played really well on the road. He’s big, physical and moves well for a man his size. Kelce continues to play at an elite level at center, but the guys on either side of him are a mess. Herbig gets pushed around too much and struggles in pass protection, while Pryor has the size and strength but lacks the movement skills.

If Johnson can’t go, Driscoll will make his first career start as a rookie out of Auburn.

On special teams, kicker Jake Elliott is really solid. He has a strong, accurate leg and provides stability at kicker. Punter Cameron Johnston has a massive leg. Through his first two NFL seasons, Johnston has recorded the highest gross (47.2) and net (42.5) punting averages in Eagles history, according to the team’s website. He can really flip the field and pin teams deep.