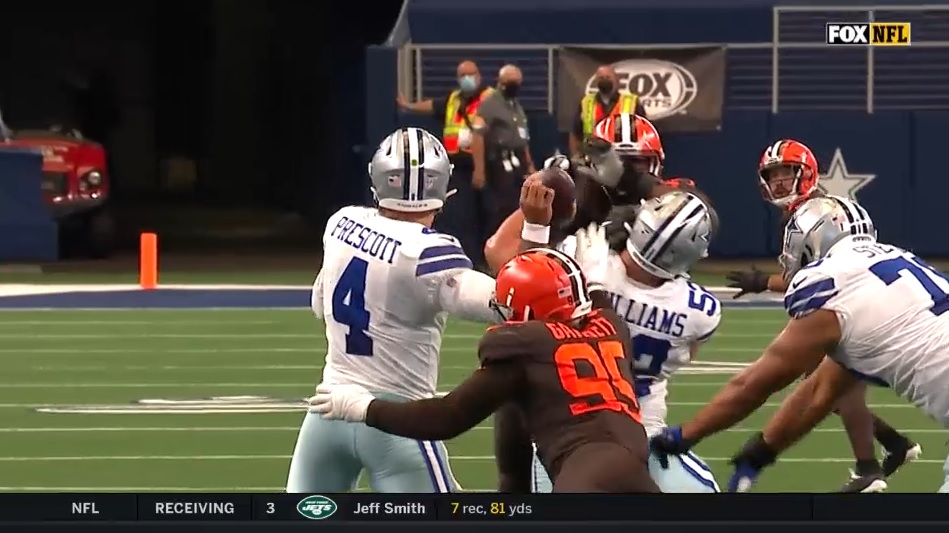 Cleveland has a tough run defense. They’re allowing just 3.9 YPC, tied for 8th best in football. Only given up nine runs of 10+ yards, tied for fourth best by a defense in football. This defense has also forced seven fumbles, five against the run. So they get after the football. Myles Garrett leads the team with three punchouts.

Though Garrett captures the headlines, this d-line is stout across the board. Sheldon Richardson is playing well and Larry Ogunjobi has always been one of my favorite run stuffers. This group is strong and stout at the point of attack, making it hard to run inside on them. If you’re going to run the ball, get it off tackle and on the perimeter. Teams have gad success with WR sweeps and end arounds and runs with the back bouncing it outside.

It’s tough to base block these guys. Soon as a guard or center climbs to the next level, the DL gets activated and makes a play.

Some other stats. The defense as a whole has been prone to giving up points. 25th ranked scoring defense at 29.8 PPG allowed. Given up 20+ in all five games and 30+ three times. 20th ranked red zone defense, opposing offenses finding the end zone 65% of the time, and they’re struggling on third down too (46.8%). That’s just 21st.

Pass defense has been worse than their run defense, like a lot of teams, including the Steelers. Allowing 7.3 YPA, that’s tied for 11th, and they’ve allowed 12 passing touchdowns. That’s 29th among defenses.

Defense also has 12 sacks. Half of those come from Myles Garrett. He has six, second in the NFL only behind future Hall of Famer Aaron Donald. Garrett has normally lined up as their RDE in seasons past but they’re moving him around a bit more. Some of it feels matchup base. In Week 4 against Dallas, he played a ton at LDE. Moved him away from All-Pro LT to take advantage of some rookies along the right side. So I could see Garrett on Okorafor a decent bit this weekend, though Garrett has had plenty of success against Alejandro Villanueva.

The rest of the defense has just six sacks. Two of them have come from corners MJ Stewart and Tavierre Thomas. Browns don’t blitz a lot, only 23% of the time (that’s 22nd in the league) but some of those blitzes are getting home.

In coverage, they run a lot of Cover 6. Quarter-quarter-halves. Get that or a straight quarters look against a lot of 2×2 formations.

One area this defense seems to struggle with is #3 vertical. They struggle matching the route and it’s lead to busted coverages, receivers running free down the middle. Couple of examples.

Not a blitz heavy team as we pointed out earlier. Will bring some nickel cornerback pressure, like I said, their CBs have two sacks, but they like to rush with four and drop seven. They will sometimes “mug” the A gaps on third down with a “Rain” blitz. LB blitzes away from the center slide. Other one drops.

This is an important game in week 6 being the first divisional game of the season and these aren’t the usual Browns we’ve seen in recent years.  They come in at 4-1 and would like nothing more than to knock off the Steelers. They have a very solid mix of veterans and rookies and use a heavy rotation at defensive line and linebacker.

Again this week the Steelers will face a formidable defensive line.  Inside they have Sheldon Richardson and Larry Ogunjobi.  Richardson is usually the 3 tech and plays well versus the run and can pressure inside against the pass.  He has good quickness and the strength to hold up against double teams. Ogunjobi missed last week’s game with an oblique issue but should be back this week.  He’s a stout run defender from the 1 tech position also provides pressure with 5.5 sacks each of the past two seasons.  Olivier Vernon (groin) plays the strong side defensive end and uses his hands well where setting the edge or rushing the passer.  He’s a little better using speed to power rushes using good pad level and leg drive to push OL into the backfield. On the other side is Myles Garrett who is a pressure machine.  He leads the league with 6 sacks and can get to the QB with power or speed.  He has very good bend around the edge and gave the Steelers tackles all they could handle last year.

Here is a look at the bend and flexibility of Garrett (95). He is lined up to the left of the screen and will chop the outside arm of the LT and duck around him, gather and get the sack.

Behind the starters inside is Vincent Taylor a veteran wide body run stopper inside and rookie Jordan Elliott who has good lateral agility, strong hands and likes to use a swim move.  On the outside they have Adrian Clayborn a ten year veterans who fits as a situational pass rusher and Porter Gustin who has good completive toughness but lacks quickness and agility.

At linebacker the Browns have a handful of players and use them all. B.J. Goodson is the MIKE linebacker and on his third team in three years.  He’s the communicator and is a solid processor of the run to work through traffic but struggles a bit in coverage. At the SAM is Mack Wilson who is aggressive and can play sideline to sideline and is very competitive. Sione Takitaki is the WILL linebacker has a high motor, diagnoses well has good short area quickness.

Here is Takitaki (44) making a tackle in the backfield when the Colts try to block him with a WR. He uses his hands well to shed the blocker and makes a clean tackle.

They’ll also use Malcolm Smith who plays in sub packages and uses veteran experience to handle coverage against RB/TE’s in Man coverage. Jacob Philips is a developmental rookie with speed who is best chasing to outside and he is also used in sub packages.

The defensive backs are led by third year cornerback Denzel Ward.  He is their best coverage DB has very good speed and ball skills. He doesn’t have great size but he competes with everyone, has good toughness and will support the run. On the other side they have Terrance Mitchell who has bounce around the league a bit.  He has good size and likes to play physically and like Ward will support the run. Kevin Johnson played in the slot last week. He’s another veteran who shows good read and react in Zone coverage and will stick his nose in the fan. Tavierre Thomas is one of the DB’s they use in Dime coverage and has good speed, been used mostly in Zone coverage and excels on special teams.  M.J Stewart was in for just 1 snap last week but played 52 total in the previous two weeks.  He’ll play closer to the box and is a willing tackler and will be used to blitz.

Ward (21) isn’t just a cover guy. He’s in the slot here and will come up quickly to cut down the receiver with a jolting hit.

At safety the Browns hope to have Karl Joseph back this week. He’s the strong safety and likes to hit. He processes well and gets downhill in a hurry, uses physicality in coverage but is best in the box.  Andrew Sendejo is the free safety who most likely will be lined up deep. He is a willing run defender but has struggled in coverage this season.  The Steelers will look to go at him this week.  Ronnie Harrison, Jr. played in place of Joseph last week and had a pick six and nearly another interception the week prior. He’s a physical tackler and looks to be a bit of ball hawk in his first season in Cleveland but is dealing with a concussion and may be out this week. Sheldrick Redwine is a versatile safety who fits best as a free safety, hits with power and has good athleticism. He had his first defensive snaps last week and got his first interception.

Here is Harrison (33) against Dallas. He’s the safety to the top of the screen and will read the QB and undercut the route coming from the opposite side to break up the pass.